3 Home games in a week

Seems to be a lot of doom mongers on social media already and we’ve only played 1 game.

Anyway surely the next week is going to give us a good idea of what this team is capable of with 3 home games in very quick succession.

Let’s see what they can do with a few more games under their belt backed by a few thousand at the Banks’s. 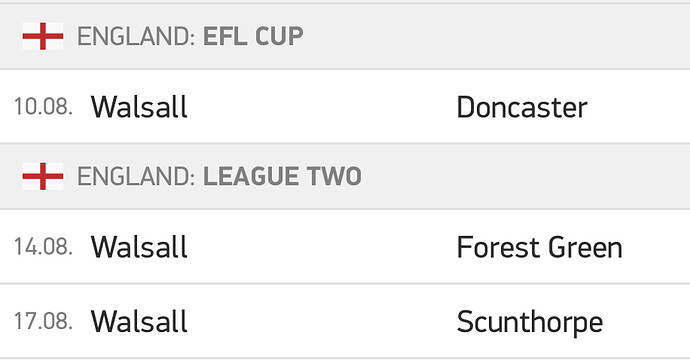 Made this point to the two who travelled up with me yesterday Steve.

In fact I’d push it further and say this whole month will. Especially with Hartlepool and Stevenage who aren’t expected to be big hitters.

But for sure, getting the lads some right support these next three games and see how they do will be an indicator. I really think we’ll get a result against Doncaster Tuesday.

I’m going to Forest Green and Scunthorpe games not bothering with the cup game so 4 points from the league fixtures and getting through to the next round of the cup as we need a cup run of some sort would be very nice Thankyou.

Forest Green will be tricky game but I would like to see six points from these first home league fixtures personally.

Be interesting to see what the attendance for FGR game is . That was our first home game when LP took over and DC,s first home game. Think the crowd was just over 5k.I know FGR will only bring a hundred or so but I would hope we have similar crowd for Matt Taylor’s first home league game.

Well we know there’s 2,600 season ticket holders round that up to 3,000 with the 400 Forest green bring I reckon about 4,400 with pay on the day and people who buy individual tickets

Win tonight and a few extra might roll up.

Great information on home games, what about Hartlepool in 11 days, people could avoid £1.25 by picking them up while we play at home, some information on away games would be helpful.

You’d think they’d have the Hartlepool tickets on sale by now since they were selling them for their opener against Cawley at least this this far in advance - and we’re already selling tickets for our home game against Stevenage a week later!

So long as they are out before next Tuesday there will be other opportunities to collect at a game without having to make a special journey.

BTW When I logged onto our eTicketing just now I got a message saying it was busy and I was in a queue to get in and only have 10 mins to make a purchase when I got to the front! That’s the second time I’ve had that - it’s no better than using the phone (which doesn’t cost me an extra £1.25 per ticket …)

Family of 4 attending the next 3 home games equals £15 of booking fees, shocking!