A night of nostalgia

My youngest (14yrs old) had his mates round earlier .3 Villa fans and bizarrely a Blackburn fan.

They were asking if we had ever beaten a big team. Thanks to YouTube they saw us best Arsenal/ West Ham and thrash Blues.

None of them could believe it.

I really feel for my youngest who is 100% invested as a Saddler. I don’t think we will ever see this happen again.

I wouldn’t mind getting blue’s away in the fa cup if we win tomorrow ,it would be quiet a big game for us and it wouldn’t be impossible for us to win.

I told a young Bluenose (20 years old) a few weeks back that I had seen us beat ManUre, he was astonished and said “was it a friendly?”. I’ve also seen us beat teams such as The Arse, Leeds, Wolves, Newcastle, Leicester, Blues, West Brom, Brighton, Burnley, Sheff United, Southampton and Watford, and iirc we came within a minute or so of being able to add Chelsea to that list. We were oh so close to winning at Bolton when they were top of the Premier League as well.
Out of the current premier League I’ve not seen us beat Chelsea, Man City or Liverpool, and I’ve not seen us play Spurs or Villa or Everton.
I’ve never seen us beat QPR either, a 0-0 draw in the first leg of the league cup just over 20 years ago is the only time I’ve seen us not lose to them, I think.
I think I’ve seen us beat everyone else, except for a couple of Johnny-come-latelys like Harrogate and Sutton, unless I’m forgetting.

That’s some going that is. And for a couple you’ve not seen us beat you must have a decent story. For example you’ve seen us finish above Man City in the league and drawing at Anfield isn’t too shabby.

Going the other way, I think I’ve seen us beaten by every league club except Newcastle, Everton, Arsenal, Villa, Spurs and Barrow. I don’t include seeing us lose to Barrow on ifollow.

Yes, the draw at Anfield almost felt like a win to a lot of us, I’m sure. I think the 2-2 with Chelsea in the League Cup in 1984 had Colin Lee (what happened to him?) equalising very late on to earn a replay.
Many of us have, of course, seen us finish above Man City, and we look forward eagerly to it happening again, and in 2000 we came so close to winning at Maine Road, I think Ricketts air-kicked four yards in front of goal, and unless I’m romanticising it was in the very last minute.

I’ve never seen us play Spurs, Everton or Villa, although fans 2 or 3 years older than me could have seen us play all three between 1969 and 1972.
I expect I’ve seen us lose to everybody else at some point, with the exception of a couple of the recent additions to the 92, and one more exception is the only League Team I can think of against whom I have a 100% winning record, Newcastle. Played one, won one. I don’t think there are any others.

Played 1 won 1 record against Sutton too (so far). 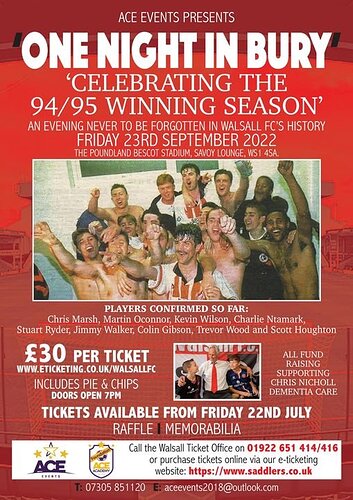 Should be a great night of nostalgia this! Seems like a lot of players from that season and the eventual promotion will be there.

We beat them in the year they won the League Cup (beating the Baggies).

And, of course, we have played Aston Villa in the league 4 times and did not lose any of them.

Still my all time favourite away day after 5 years of rubbish finally did it.

This is a good read 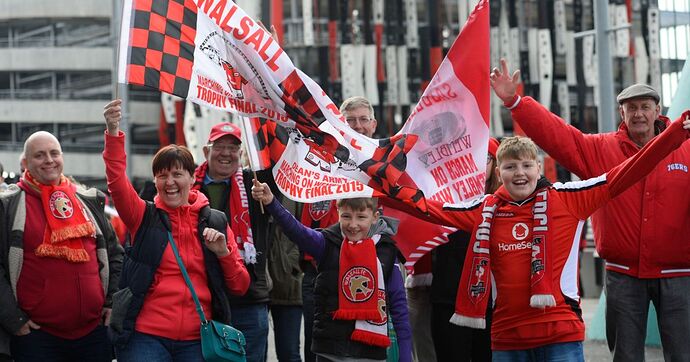 52 things that only Walsall fans will understand

We've listed some unique events, chants and experiences you should recognise if you're a Walsall fan

Was it not the purple stand before floors to go.

Bit cringeworthy, for me, that.

None of these count?

Millennials or whatever they’re called these days. Tsk. Pretty much all of them bigger clubs than Birmingham City anyway.