Just found the full highlights actually, this should be better. 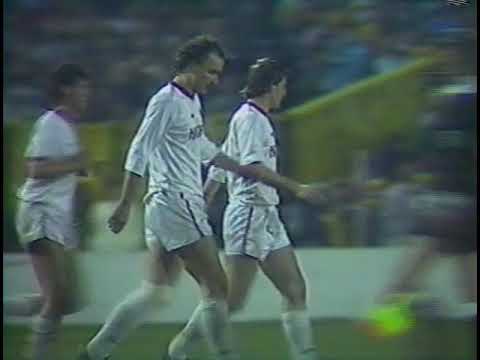 Does anyone have a clue why Watford play the theme from Z Cars when they come into the pitch?

. In typical 1980s fashion when we got outside a Fulham fan stuck a brick through our minibus window !

Must have been dyslexic and thought it read Watford

Bill McGarry (their then Manager) liked it, Everton had been using it for a while and he thought it would be good. They stuck with it for decades. I’ve always thought it works brilliantly at Goodison, but sounds a bit naff at Watford, just doesn’t sound right to me.

I took my son to the first game (he was about 7 or 8) and he wasn’t very well. The St John’s ambulance took us over the wall in the cowshed and we walked round behind the goal and in where the players came out. Unfortunately nothing exciting happened whilst we did this so we didn’t feature on the match of the day highlights! The people behind the scenes were great with him and I did miss the last 10 minutes but that didn’t seem that important at the time. My son was more annoyed with Mrs hullsaddler who refused to let him go to the 2nd replay!

I remember the day dad finally called it a day , i had been floating around the non-league clubs with dad as a supporter when i was 7 yrs old and on wards , my best days being the gloucester city days , seen some good young players , some good old pros , players bar after most games , banter flying etc , he was normally in good form , playing for money was nearing the end and i watched him run out for knowle in the midland comb in his very late 30`s , tragic , his strike partner being a rather small rather round gent , he stood for 10 mins just watching the game i knew he was thinking this is absolute ■■■■ get me out of here , indeed the 1 and only game for knowle being his last ever game on what was a colourful career , when he come out of his daydream that day knowle won and he scored the winner and amazingly his last goal was from a deep cross from the left and he rose 14 yards out to power a header into the top corner , seemed fitting a power header being his last goal , even paul broadhurst clapped the goal. however that was not the end but its not for me to say what happened on his return in 1995 - thats for him to chat about .

Z cars was set in Kirkby which is in Knowsley and prime Everton country. In fact Knowsley was mooted as a new home for Everton at one point.

From an Everton point of view it made sense. Not so much for Watford.

Shame that our keeper was fouled in the process of them scoring in the first leg.

Dodgy penalty against Hawker in the replay too.It made me laugh when I heard Taylor bemoaning their luck in the semi-final when they finally did go out. No mention of how they’d ridden it previously.

Gorra be Bernie the Bolt!

I was just sitting here reminiscing about my early teens, does anyone remember Taylors cafe on the pelsall rd in Brownhills?
I used to walk past it every day to and from school,it was the epicentre of the community, anybody and everybody used to meet in there to while away a couple of hours, i would pop in on my way home to get my tomato dip sandwich, much to my parents annoyance because i couldn’t finish my dinner lol.
It was affectionately known as “Joe’s” because that was the owners name, his eldest son Barry worked in the kitchen, and his younger son Robert was a police officer, for a while the front of the cafe was a shop, and i used to pop in to get my other fix of a packet of Tudor sweet and sour crisps, but sometimes they would be so busy in the cafe no one came to serve you, so we just used to pinch the crisps and walk out lol.
My parents both worked so they had to pay neighbours to look after me and my sister in the 6 weeks school holidays, and it was either “auntie” Joan one week or “auntie” doreen" another week, everyone was called auntie but never related.
When i got to the mature age of 12 i deemed it insulting to have to rely on neighbours to look after me, so took it upon myself to keep myself out of trouble(that went well).
One of the daily rituals was to call for my best mate Stuart Bromley and make our way to the weeping willow just over the swan bridge on the pelsall rd, armed with either a purse or a wallet and some thin fishing line.
We would then secret ourselves under the tree with the purse or wallet either on the path or in the gutter, tied to the fishing line.
Then when either a passing pedestrian or car driver stopped to pick it up we would give it a sharp tug

Sometimes it didn’t go quite to plan, some people have no sense of humour

Then after a few hours of getting called all the bastards under the sun, and sometimes a sore arse we would make our way to Joe’s for a well earned chips and gravy with two bb

Then after a few hours of getting called all the bastards under the sun, and sometimes a sore arse

What on earth did they do to you…

Only kicked or smacked Sid