I went to the Peterborough match. What a horrible journey that is midweek! All worth it for the result though. A great night.

Fantastic cup runs that season, always remember the celebrations in the away end at Forest after Skinner’s goal. Also, recall we had a very good lower league opponent in the FA Cup First Round - Gresley Rovers was it? Or Lincoln United? 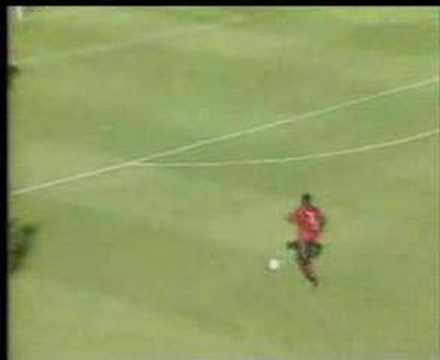 Slightly before my time, but how does a striker like Didier Tholot get a loan move from the top flight in Switzerland to League One in England?

It just seems like a transfer that would never happen these days. Must have been brilliant to hear about these completely unknown players signing and then seeing them for the first time on the pitch.

What a joy that guy was to watch

For me Peron is arguably the best player to ever wear a Walsall shirt.

Yeah, we stayed up by 4 points and lost our last 3 league games. A 2-0 win at home against Millwall secured our survival prior to an awful run to finish the season.

That Millwall game was the first time on the terrace on a Saturday that I recall there being open gaps where I stood right behind the goal. For all the cup glory there was some really poor league form and some dreadful attendances that season, the cups overshadowed everything else. Brentford went down in the last relegation spot (I wonder where they are now?).

Like someone has said above, and I had never considered this before, but the players obviously had ability and lacked focus / inspiration for the bread and butter - which is where a manager earns his corn. BFJ was not the answer as Graydon proved the following season with probably a fraction of the budget.

The WFC purse strings were looser back then I suppose. Boli and Peron can’t have been cheap, nor Tholot, or Eydelie who we signed on loan as well but he was useless even though he’d played in a European final just five years earlier.
In 1996 we signed Mark Blake just a couple of years after he’d moved for £350,000. Gary Porter must have cost a wedge, he’d played hundreds of games for Watford and was well respected.
In '96 we paid money for Andy Watson, I doubt we were the only club after him, he was a known goalscorer.
We’d sold Lightbourne, plus MOC and Houghton a year earlier, I suppose that was where the money came from. I think we got a fee for Butler too.
Different days for us, I suppose, it isn’t just the exotic, exciting foreigners we wouldn’t sign now, it’s hard to see us signing the likes of Blake or Watson either, not at that stage of their careers.
We had Derek Mountfield in the team and he’d won a League title and cups with Everton, a couple of years earlier we’d had Colin Gibson who’d played regularly for Villa and ManUre.

Oh for some of that quality now.

What I think we are all realising is that whilst we shopped in the bargain bin with regards to free transfers in the 90s and 00s … our recruitment was second to none.

The work done by Halsall, Jones and others with regards to YT was also second to none

Yes they were. More so compared to our opposition too.

Agree about JP, best I have seen. That’s Tholot goal at Watford was also fantastic. Smooth Roger loved the summer but didn’t like the winter in Walsall !
I also think the work Mick Halsall did was incredible, a very underrated coach, But billy Jones was only the mini bus driver

I was in the Stanley Rous stand at Watford in with the home fans wearing my black and red checked Walsall shirt when Tholot scored that goal. I jumped up forgetting I was in with the home fans when he scored but quickly sat down again. Big signs up saying away supporters would be ejected from the home end with no refund. When Blake scored the winner I bit my tongue. My Watford supporting friend I went with wasn’t too happy that night.

The WFC purse strings were looser back then I suppose.

They were. At the risk of going down a freehold rabbit hole this was only a couple of years after it was apparently impossible for us to raise, beg, steal or borrow £300,000 to buy the Bescot freehold.

I also thought Wigan right away, but a few things I have posted recently my memory has been off, so I was waiting for someone else to say

What I do recall is that Wayne Evans scored his first and only Walsall goal around the same time. Both very special moments for players the fans really loved.

What a sweet strike it was as well!!