Yes I have, I said changing formations was Normal which it is … So wtf are you arguing about you lunatic , this is comedy gold.

If your looking for some sort of ego boost I don’t think this is the place mate.

It’s so funny having somebody literally post twice before I can even respond whinging about where THEY have been led.

I don’t need an ego boost, I’m telling you facts and you don’t like them. Sorry. I’m sure there’s another insult coming.

You are saying that you’ve been right about everything, that’s not fact … you sound silly.

Anyway enjoy the game I’m off for a beer

Fancy a double wedding? You two- and Samsara Saddler and myself?

I’m deleting the thing after this , I can’t be arsed anymore

Anywhere on the right side to be honest but right back ideally. Not saying he’s fantastic but certainly his best season out the 3.

Ability to change is completely accepted and acknowledged but you need to have a 1st choice tactical approach, which is generally “stuck to”.

Unfair to compare Smith’s team in his final season (who just missed out on the Championship) to the gutter level we find ourselves at today.

Which indicates even further that you really have to keep things simple, when the squad has shown such limitations.

Like Troy Deeney on the right wing? Or Martin Butler at left back? Or Dan Fox left midfield? Or chris marsh anywhere outfield? Or, even further back, perhaps Peter Hart shouldn’t have been tried at centre half?

I’m not for a moment suggesting that Norman is a perfect centre midfielder but I 5think that, in many cases, the idea that a footballer only has one position is a false one.

The facts are 99% of Players do have one favoured - and best - position.

Well he does - because he’s very slow, poor position-wise and doesn’t have the football brain to play in the middle.

A bit early I know but if you had to tomorrow would you be happy if we had him as a full time manager? I’ve seen a little bit of improvement after him not having long at all with them as the manager

Let’s be honest this isn’t Dutton squad and imo the defence is more a problem than the attack. We haven’t kept a clean sheet in 2 half months but we’re scoring goals. The problem lies at the back. I know our fans love to slag lavery off but him and McDonald are the only ones who hit the target.

It’s refreshing just to hear BD speak when interviewed honestly and humbly saying it as it is , rather than telling everyone how many promotions and badges they have .

For the interviewer to actually finish a question before being rudely interrupted by what I know believe to be a right gobshit is so much easier on the ears .

I never slated DC while he was our manager and always wanted him to succeed , but now after how he’s left walsall football club and the press conference’s he’s done at Port fail I hope he falls flat on his arse .

He obviously thinks he’s better than he really is .

Good luck Brian and hopefully we can get behind you some time soon.
UTS

…and they’ve got to be mentally deranged to want to come here! 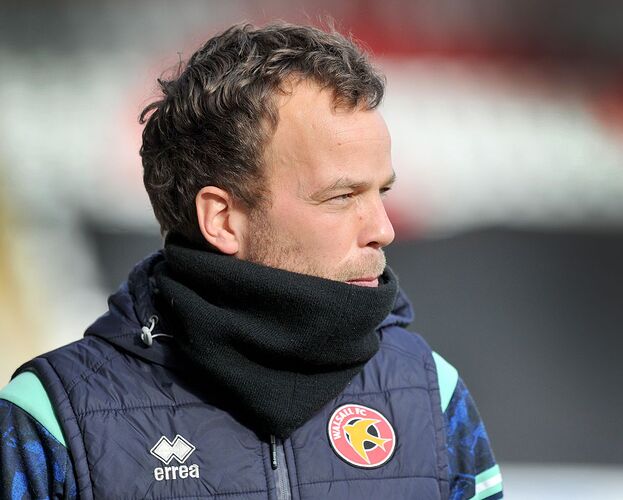 Brian Dutton insists his 'mock interview' with the Walsall board came with the blessing of former boss Darrell Clarke.

That’s a real shame isn’t it …

Probably the week we played Vale away. I wondered at the time why Clarke ducked the post-match interview.

Well I know Dutton is a young coach etc, but we need a kick up the backside. We need another big reset in league two…