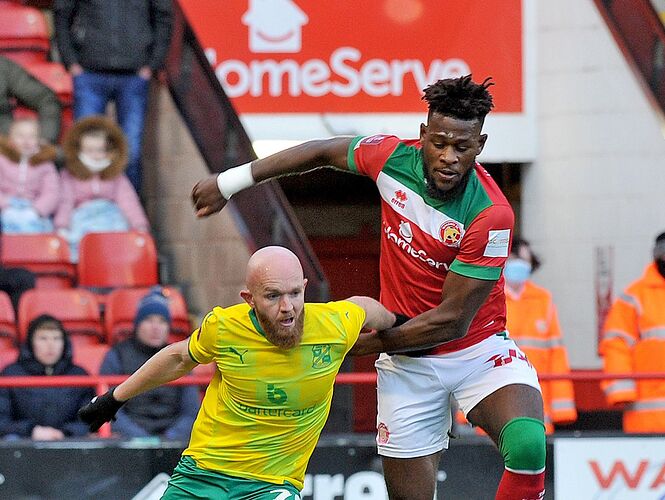 Rollin Menayese is grateful to be playing regularly at Walsall – and says this is the most enjoyable spell of his career so far.

He’s probably the best centre half we’ve had since Butler, Downing or J O’C.l and has a much higher ceiling than your average League Two defender.

Sign him up and sell him on in 18 months time for a hefty profit should be the plan and then rinse and repeat.

Why sell him on when he could be the core if our championship campaign.

But a great prospect hope we can hang on to him.I think he has a good future in the game.

He’s done really well hasn’t he? I don’t think he was expected to be in front of Monthe or Taylor initially. Got to be one of the first names on the team sheet when available now.

He has been brilliant so far this season and seems a really nice lad,came across really well in his interview the other week his parents should be very proud of him.He’d certainly be a credit to the club if he became a Walsall player.

Which he won’t of course. Ink drying on the pre contract agreement with the mighty Crawley Town… Followed by Omletts You Tube update. ‘He wasn’t what Matt and Jamie wanted in the long term’

Anyone spotted a lesser spotted club failing and going out of business because of Covid ?

Haven’t Mansfield won 9 of their last 10 games so no need for them to take him back and they’ll obviously want to get some money in for out of favour player given what they spend each summer.

Pomlett said at the forum he wants him signed up aswell so I think a chunk of Rico windfall will go on him signing two and a half deal as he can obviously follow path of Zak Jules with his age profile.

It actually reminds me of that season when Holden and Butler started season as first choice but you could see quickly it was just too slow as a combination so Paul Downing came in and there was better balance.

Hopefully he plays well alongside Taylor for next few weeks. Needs to be signed up full time before Mansfield away aswell.

I just hope if he does sign permanently he keeps his level of performance as consistent as it has been.I’d say he’s a consistently good centre half is a good description of him and sometimes when players nail down security they drop off and show complacency but I have to say listening to him I can’t see that happening.

If one is allowed to read that interview at face value, then I think you might conclude, Mansfield permitting, that he would happily sign a deal with us. He mentioned a key word in being grateful.

He declared that everything was good in terms of his relationship with various aspects of the club and that this was probably his most settled period in football.

Can’t remember the Chairman’s exact words, but he certainly gave the impression that the club wanted to sign him. Having passed the “right character” test, otherwise he wouldn’t be here, there doesn’t seem too much to prevent a deal, other than his agent and a relatively silly money salary offer from others.

If there wasn’t too much of a chasm between our offer and others, it would be nice to think that he would overrule his agent and actually demonstrate how grateful to us he really is.

Thank you for reading.

Didn’t I read somewhare that his agent just died?
That’s a terrible thing to say if I have been mistaken, and I apologise in advance if I have got that wrong.

Dom Yarwood is the agent that died recently but no idea if it’s Menayese’s agent.

Thanks, I thought that he was Rollin’s agent.

Sorry to hear that about his most recent agent, however he will employ another one and my point will remain valid.

Was less committal about Miller, however