Whatever we think about our current position, it is a sobering fact that all four clubs in the relegation places in the National League are former football League clubs - old friends in a way. Their prospects do not look good. Moreover, 8 out of the bottom 12 are also old friends. On the brighter (?) side

, some NL clubs like Wrexham and Notts County are pulling incredible crowds and those two look likely to rejoin us. Brighter side??? Bad choice of words? We’ll, both are, relatively speaking, money bags with sugar daddies: not ideal. What clubs in the NL or EFL have been successful without sugar daddies of one sort or another?

Whilst not a great fan of our recent “pragmatism” financially there is clearly a very fine line.# in this game between investing and catastrophy.

I saw someone say Bristol City lose 500k a week in the Championship. Who the fudge wants that or thinks its the correct/ moral way

Make no qualms about it.

We were on this trajectory under Pomlett and Co. He knew it. That’s why Trivella are here.

There’s lots about us. Most notably the recruitment and the youth set up (whose production of players has stopped flowing) that is very non league still.

There will be 10-12 national league clubs with better footballing infrastructure than us.

No signs of this infrastructure improving. Good job Flynn is holding it together

Although to my age group not one of 92 proper clubs , it is interesting to see Macclesfield working their way back up and pulling bigger crowds in the NPL west division than they use to in Division 4. Over 3,000 watched them today.

Bury AFC are pulling in regular crowds of over a 1000 as well down in the North West Counties Premier league , yet some of the older phoenix clubs iike Aldershot were pulling in bigger crowds 25 years ago when they began there journey than they do today despite crowds generally increasing .

I sometimes wonder what has been gained if anything with the creation of the gateway from Non league to league , we have very small community clubs living beyond there means chasing an unrealistic dream, we have the creation of plastic clubs like Salford , Crawley and Stevenage and loss of proper football clubs like Scunthorpe, Oldham and dare I say the name at present Chesterfield. On the other hand the gateway has allowed Accrington and Barrow back into the Football league (we just need the likes of York and Southport back and you guys would have great away days)

There is certainly something to be acknowledged by some clubs going bump reforming and the fans coming back.

Macclesfield have probably never had those attendances in my lifetime. Enjoying it more than they used too no doubt too.

Like today i know it was a thousand kids but it was glorious when the winner went in. Some good scenes. Long may we attempt to continue it.

There needs to be more of yesterday. Why can’t 500 plus tickets be made available to schools teams and groups every week

I was took to Fellows Park on a free ticket back end of the 80s we were bottom, lost 1-0, rubbish but I wanted to go back

If you love Football you can’t beat live football.

In fact, I know we pushed the kids go free thing. But Trivella go one further. secure our future. Make the family stand so that 1 paying adult can take 2 kids in for nothing.

It’s sad to see Torquay United propping up the NL. Great away trip as well!!

The National League is a tough gig. No mistake.

Even with our current side and their rejuvenated form, I’m not sure we’d be guaranteed top half.

In the last four seasons we have been very close to that kind of footballing oblivion. And whilst for now we have a bit of wind in our sails, that wind sees us just about top half in the fourth division. A fourth division that will probably get harder next season as you’d back two of the rejuvenated old league friends to come up.

Which is why we can’t be complacent. Travela are making baby steps in the right direction and hopefully we have bottomed out. January is massive for us. A window where we have traditionally trashed our season needs to be one where the very minimum expectation should be that we don’t make our team worse.

Because league rules do not allow it. There are limits put on clubs on what offers and how many times they can have offers.

Make the family stand so that 1 paying adult can take 2 kids in for nothing.

I am not 100% sure of this, but I think this is already the case for under 12s. You used to have to sign up for Swifty’s squad but I have read a few people mention that you can just get children’s tickets with a paying adult.

Not very well advertised, hence the uncertainty though. I agree they could do more to try and get more in the family stand which is mostly empty most games.

Not true though really of all of these. the original league was mainly northern clubs that wanted to go pro as they couldn’t afford the time off work to play. Some of the “newer” league clubs were probably founded around the same date if not earlier. They just weren’t in on the league as they weren’t from the north.

The National League is a tough gig. No mistake

You’re right. Clubs generally are relegated after a few years of decline and even a division lower it isn’t always quickly arrested. Stockport took a decade and a bit to get back and they are similar to us. Luton and Oxford took a few years.
There are quite a few teams familiar to us jostling around at the top, but also a cluster at the bottom that we have watched play WFC in the last few seasons.
Worrying, and if this current incarnation of the club doesn’t work for whatever reason or reasons, that could so easily be us.
There are green shoots but a long way to go after years of mismanagement and decline.
Still, five League wins in a row at home, when did we last do that?

Over half of the teams in the NL have played in the EFL at some point, and quite a few more even lower down the pyramid, so it"s not surprising that there will be one or two in the relegation zone.

For a club like Notts County who are supposedly the oldest club in continuous existence in the whole world, were founder members of the League in 1888, FA Cup winners, and even played several years in the top flight (just missing out on the EPL), then yes it is a tragedy for them to even be non-league - but that is where they find themselves after quite a long perid of decline and mismanagement.

Most of the others though have only ever been D3/4 level at best. And let’s not forget that Macclesfield (like Yeovil) only came up from non-league in the not too distant past before dropping back down again.

To think that somehow previous EFL status ought to be a protection against finding yourself in the NL, or that non-tradional sides coming up into the EFL shouldn’t be allowed, goes aganst the whole ethos of having a pyramid to start with.

five League wins in a row at home, when did we last do that?

I read earlier Nott’s County had over 16000 yesterday v Yeovil. How did that happen? I think tickets were at a discounted price but that is a huge gate for a club like Nott’s County.

In the 1949-50 season in Division 3 South, we played at Meadow Lane in front of 42,676. They won the title that year, which partly explains it, but also Tommy Lawton was playing for them, which was probably the biggest reason for their huge crowds. They paid a record fee for him, it must have been like us signing Harry Kane next season (I have my fingers crossed).
But you’re right, those crowds are a long way behind them, so well done on getting that many yesterday.
Incidentally, Notts County away in 72-73 was the first time I ever saw us in a featured game on Star Soccer. Very exciting for me, a 1-1 draw, Joe Mayo scored on his debut (coming off the bench), Billy Wright said nice things about Nick Atthey, and the crowd was 9,554.

I dare say there would be initial novelty value and some interesting away days. How long that lasted would depend on how we did. If we did a Dicky Dosh and came straight back up we would get good crowds and take loads away. Can’t honestly see that happening if we did go down, also taking into account the experience of others similar to us who have gone down. I think people would still turn up in numbers for ‘big’ matches (Chesterfield, Wrexham, Notts County etc away…). But the way the club has been run for years I think the chances are we would sink into oblivion. Hopefully the Americans can stop the rot and turn this ship round so that this discussion remains purely academic rather than a reality. 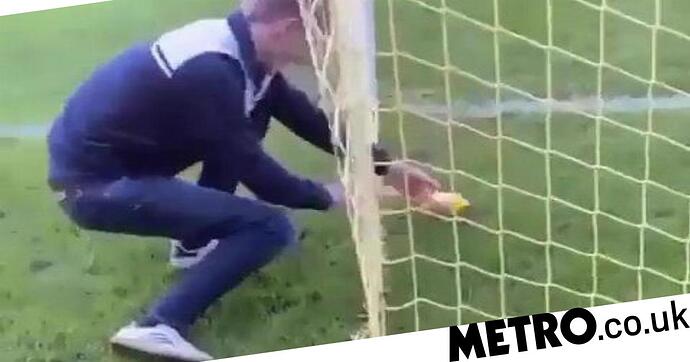 It all kicked off when the keeper took a swig from the bottle.

Scunny seem to be in terminal decline given Keith Hill did nothing there. Were in league 1 play offs as recently as 17/18 season but made countless bad decisions with managers and transfers over last 5 years.

Think Oldham will just about scrape survival but appointing Unsworth isn’t great. They have new owners so will probably take a season or two to turn the tanker around before they seriously challenge to get back into the league.

Torquay have always been a bottom end division 4 side bar the odd season in league 1 in the 2000s so not a huge shock.

Yeovil again 20-30 years back thrived in non league and had many good cup runs. Massively overachieved in their league days making championship in 2013 and they knew it. Once you get relegated and keep on losing games it’s hard to stop that trajectory as this club has seen at league 2 level.

It is certainly hard to get out of national league, really should be 3 up, 3 down.

I read earlier Nott’s County had over 16000 yesterday v Yeovil. How did that happen?

Think they were selling some discounted tickets in an attempt to beat the record for a non league crowd, which they already held from a crowd over 12,000 v Solihull Moors last season last season.

On that subject, Wrexham also had over 10,000 at home yesterday and had the biggest crowd of the 40 first round FA Cup games of over 9,000.

If say Notts and Wrexham do go up, they will possibly getting bigger crowds than anyone this season except Bradford, giving them even more financial clout in L2 to go with anything else their owners are chucking at em.