Fed up of the succession of failure loanees that we sign mainly from championship clubs. Flynn Clarke the latest and the lad from Stoke no better. Remember the non entities we had from the Blues that got nowhere near our squad. Could go back season after season. The so called striker from Oxford Del boy. Remember a real duffer we had from brentford cant Remember his name the list goes on and on. These guys dont seem anywhere good enough to be playing regular football in our league and most of them spend there time on the sidelines or playing the odd papa johns game. Whats going[ on? Whats to say the new lianee from Coventry will be any better?

Justin Shaibu - one of the worst football players i’ve seen in many a year.

The list is pretty endless if you fancy carrying it on

Another from Dean Smith

Robin Shroot, or is that harsh?

Will Randall from Wolves, came off the bench a couple of times iirc. Signed to play as a winger at a time we didn’t play with wingers.

Connor Johnson, another from Wolves, played a few games, now in non league.

Kevin Toner, from Villa, a useless centre half.

Julian Ngoy, from Stoke. Looked OK, in comparison to many of our other horror shows and nonentities.

Aramide Oteh, on loan from QPR for the second half of the relegation season and looked nowhere near the quality we needed.

Loans can go 1 of 2 ways, so naturally I prefer to remember the great loaness that we’ve had. 2 of the best, in my time supporting the Saddlers:

Both excellent players.
DJ may well fall into this category too.

He actually looked OK when he played, should have stayed and he might have done well.

Yes, I thought he looked OK, he made a couple of costly mistakes, like most young defenders.
Currently in National League North.
At the time I would have been happy to have seen him have a few more games.

Thought we was forging links with our neighbourhood clubs? Look at all the decent loanees Villa have sent out Swindon had a couple of decent ones. Newport had a decent lad from Villa if i remember right why are we getting the dregs all the time?

As I said on the other thread. Many are on a ‘last chance’ basis in the Football League in their home clubs. We’re happy to take them as they are Free. Simple as that really

Julian Ngoy, from Stoke. Looked OK, in comparison to many of our other horror shows and nonentities.

I thought he wasn’t great at the time but after a quick google I didn’t realise he’d scored 3 goals in 13 games for us. Not the greatest record but sadly a record a few of the strikers we have had in recent seasons could only dream of!

Still only 24, he’s now with Mechelen in the Belgian top division, after a couple of seasons with Eupen, also in the top division.

Paul Ritchie, George Evans, Julian Joachim. Had some stinkers, but had some very good successes.

Kristiqn Bielik has to be the ultimate let down!!

He was the 21st century Gijsbert Bos.

We use to loan experienced players, we now loan YTS… it’s cheap and failed.

To many to mention…

If he’d played he would have done very well imo.

Many are on a ‘last chance’ basis in the Football League in their home clubs.

Or you could put it like the younger loans are sent out to see if they can handle the step from academy/youth football to being in and around a first team squad and playing actual games that matter as a valuable part of their development…but that doesn’t suit your permanently negative narrative does it ?

Our loans in from the last few seasons… 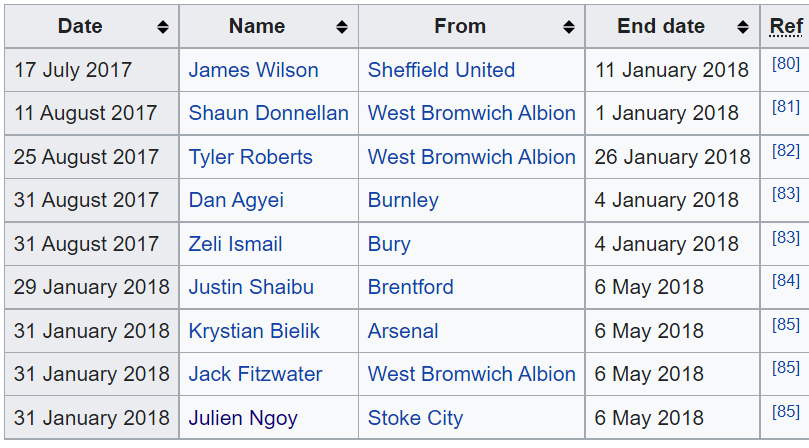