Suggestion that the English Football League (EFL) enter discussions to absorb the National League top division into the EFL structure.

Very worried about that. In effect, I think it would ;relegate the current Leagues 1 and 2 into non-league rather than making the National League of higher status. It would almost certainly mean a return to regional divisions with Midlands teams being messed about. And it would also be a push for the Championship to become the PL Div 2.

And it would also be a push for the Championship to become the PL Div 2.

This was my thought too…clubs there are already spending way more than they earn, so joining in with the “big boys” and gaining access to all that TV revenue is the obvious step for them to balance the books.

I agree with your analysis @Laundryman.

We all know the EPL was set up so that they could get their own TV deal and keep all the money to themselves so didn’t have to share it with clubs lower down the pyramid as they had previously.

The EFL have a separate TV deal and the Championship clubs have always muttered about having to share with L1 and L2 clubs while they constitute most of the games televised. They would be even more disgruntled if there was another league’s worth of clubs to dilute the pot down further.

So would probably end up becoming EPL1, EPL2 and 3 levels of EFL.

On the other side of the coin, the national League also have their own much smaller TV deal with BT (as Sky only have time for the big boys) for just the clubs in the NL top tier. Would they get a better cut from joining up with the EFL (especially if it was only L1 & L2) or staying as they are?

If proof were needed, tonight’s little episode just goes to show the value of a 3G artificial pitch. While Bescot was called off, Rushall Olympic’s friendly at home to Telford United went ahead without any problems. Indeed, while there were puddles on the car park, the playing surface was immaculate.

Like it or not, 3G pitches (and their successors) are the way forward. It makes economic sense at Walsall’s level.

How many games have we lost to the weather over the past say 10 years? I haven’t looked it up but it’s not that many at all.

At Walsall I meant

Not many - thanks, in part, to Bonser’s state-of-the-art braziers to thaw the pitch out at the away end.

Ah yes… here they are in action… 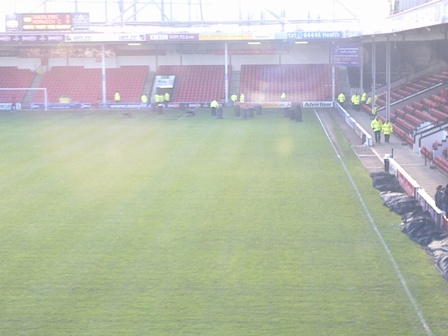 We do have a really good record of getting games on. I did want to come down to the Rushall v Walsall game to see how it looked, unfortunately I had something on with my oldest Son. I can’t say as I am in favour of the idea to be honest, but always willing to change my mind on things. Personally I think it has to be everyone or not at all in the division you are playing in.

I think it was Mansfield at home last season that got postponed owing to a waterlogged pitch caused by a mixture of snow and rain.

May still have been called off due to safety around the ground but may be not. We have in the past had matches called off for this.

Was it just the state of the pitch or general flooding that could affect crowd safety too? There have been a couple of stories on the news over the last few days of hospitals having to close because of flooding and I bet they weren’t due to waterlogged grass!

Are you sure it was Blackpool and not Fleetwood that got called off? You might just have been staying in Blackpool for the game …

Ye i think it was Fleetwood

The transfer market is barmy.
Stoke paying Bournemouth 5.5 million for Sturridge who has only played 29 games in the Championship.

When will financial fair play kick in? How can Man City afford £225 + million and still be operating within the rules?

All transfer fees should be paid upfront.

When will financial fair play kick in? How can Man City afford £225 + million and still be operating within the rules?

They won’t - Man City just hire lots of lawyers to claim it’s all valid sponsorship by Emirates and that it’s pure coincidence that they’re all owned by the same people, and UEFA/FIFA don’t have the bottle for the fight