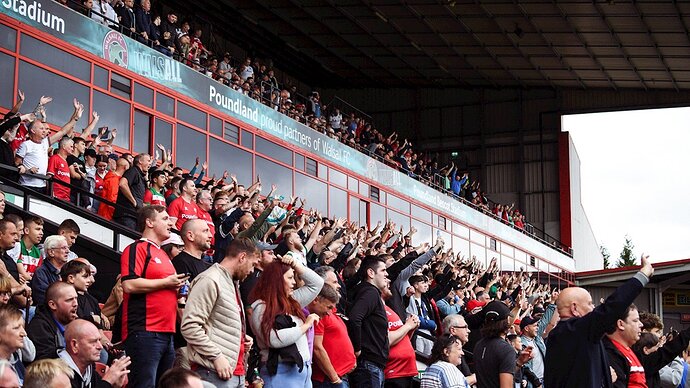 We recently asked supporters to participate in a fan survey to get your views on the Club and life as a Walsall supporter.

What a complete load of rubbish. Propaganda at its finest

Where is any analysis about what they’re doing wrong? They’ve just literally cherry picked anything that’s remotely positive.

Do they ever learn?

Hilarious, this can’t be for real??

I suspect the survey was taken shortly after the Hartlepool match

On the fifth section of the report, is the heading supposed to read Socia Media?
To paraphrase Steve Wright, is it really Socia - no “l” ?
Or is this how Bham City spelt it on the original that we’ve cut and pasted?

I have emailed the SLO asking for the data to be made available, and to ask why any constructive (negative) comments have not been included. To enact change, you must admit your failings and put a plan in place.

That report is a complete joke.

Thing is there was outrage over social media and hundreds of posts on here, guessing that was a minority then.

That was exactly what I thought as I read the results. They have put a positive spin on it, but I would like to see the raw data from the completed surveys.

We do these at work, there is usually a pack of 20 plus slides.

I have requested this from the SLO.

It is well known that companies that put surveys out always take from it what they want, and put their own positive spin on it, my old company were superb at it, leaving the workforce even more morally deflates than before the survey.
Makes you wonder what it would take for them to sit up and take notice, because i filled the survey out as did many others on here and i pulled no punches

There are some negative comments included Thanatos 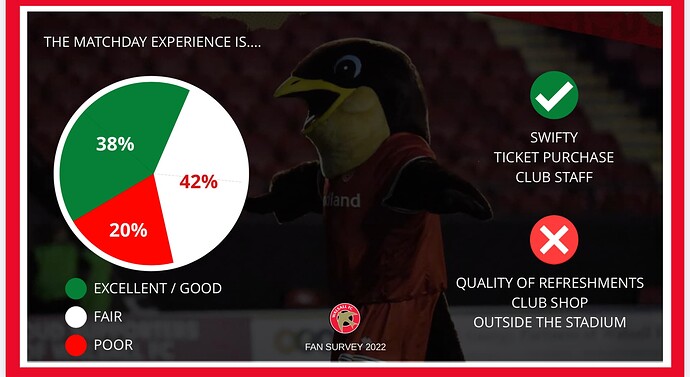 If the club thinks that the only negative thing about the match day experience is the quality of refreshments, outside the ground and the club shop - they’re either lying, or completely deluded.

They’ve just included some token harmless ones to appear like there’s something to work on.

Anyone with a brain can see exactly what they’re doing

Anyone with a brain can see exactly what they’re doing

They have form for this though don’t they, they have in the past treated the fanbase as if they ARE braindead, one step forward and all that

Thing is there was outrage over social media and hundreds of posts on here, guessing that was a minority then

Dont see the point in messaging the slo and crying improvments have and are being made to the matchday experience. There are still many things than can and im sure will be improved on. But under trivela stewardship we definitely heading in the right direction. The stadium itself looks alot fresher and more welcoming.

I know Trivela are fantastic and actual businessmen - I have a problem with the incompetent buffoons that have put us in this position - and they’re still there.

The same incompetent buffoons that Trivela have openly praised?