This statistics show the form table of the League Two between match day 32 and match day 37 in the season 21/22.

I don’t reckon it is counting midweek fixtures as it is also missing the Swindon thrashing.

Which is fine cos for whatever reason we are shit midweek.

It’s not counting Swindon or Northampton as they were P-P games, so are not included in “matchday 32-37”. Slightly pointless way to do it but it’s down to the website algorithm I guess.

No matter, it’s a damm sight better than it would have been 6/7 weeks ago .
I think moving forward we have raised the expectation bar to where it should be .
When you look at clubs like Sutton yesterday and with absolutely no disrespect , plus admiration for what they have done this season we should be in a different league in all senses .

My husband said 11th too but I like this one better.

There’s only one table that’s meaningful and that has us in 16th unfortunately.

Currently at moment this has a feel to me of Clarke’s first season. Pretty rubbish up to xmas but then hit a decent run of form from Jan-March 2020 and a decent team for this level looked to be forming.

Then season got cancelled and basically took two years and a couple of managers to get back to that point which was still barely mid table.

Flynn certainly knows what he’s doing so just have to give him similar resources to what Taylor got last season and he should have the contacts to get in decent players in the key positions e.g. not waiting until August 31st to get in a decent striker.

Benching Ward shows he knows that signing hasn’t worked out so he’ll be off and should free up wages to get the wing back positions sorted.

Actually think things are o.k at the back as long as Daniels signs on and CM. Would still love someone like Liam Sercombe today if he’s out of contract and could be tempted to drop a division.

Top based on the last 6 games! 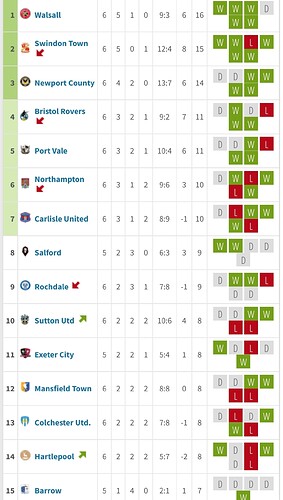 Still very good, and only Bristol Rovers and Swindon have got more points over the last 8 games.

17 points in the 8 games since Taylor left, according to WM last night. Near championship form.