I don’t read through the COVID thread so apologies if this has already been asked but with it being “freedom day”, does anyone know if and when clubs will be making a statement on whether there’ll be any restrictions at football next season?

I’ve seen rumours on COVID passports but nothing official yet

I’m hoping football is completely back to normal come August 7th and we can take a shit load to Tranmere. And on that note, does anyone know when Tranmere tickets are expected to go on sale? As you can see, I’m itching to get back

They can ask, they can’t enforce.

… but they can refuse entry.

Not unless they make it part of the ground regulations, surely.

Plus you can claim you’re exempt and they aren’t allowed to press you on why anyway.

I will still wear a mask in indoor settings where I feel it appropriate.

Anyone demands I wear one outside though will get a curt response.

Really hoping Tranmere is potd even if that is a cashless potd. We will bost through a thousand if it is.

Would like to think we’ll near enough sell out the 2500 if everything is guaranteed back to normal and POTD like you say. We took 1500 to Northampton, plus fans in their home end so we should easily match that after having no football for so long and the optimism we’ve built up atm.

The common theme seems to be signing up to a “code of conduct” as a condition of entry, so we’ll just have to see how that goes. Walsall’s is Saddlers fans are encouraged to wear a face mask and are also encouraged to socially distance where possible whilst moving around the inside and exterior of the stadium. Unless I’m missing something.

Nobody will ask people to wear a mask at football grounds what’s the point I got a feeling 3,500+ villa fans won’t be wearing them in a couple of days crammed into half the ground whilst a few Walsall fans will be wearing them with 3-4 in between in other at least we can blame the lack of atmosphere on something else next season high roof and people covering their mouth’s with bits of old rag

So Dan Mole seems to think away fans will not be allowed come the start of the season?

That’s not going to go down well! 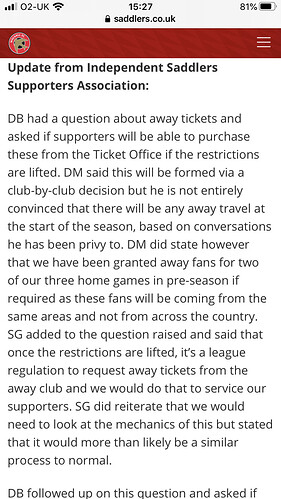 DM: “not entirely convinced that there will be any away travel at the start of the season”

SG: “more than likely a similar process to normal”

Bit of a contradiction. If the restrictions have been lifted by law, I can’t see what the issue will be. Doesn’t fill me with confidence though that we will see ‘capacity crowds’.

Me neither! Guessing the Tranmere tickets should be released by now?

I’ve just put on Twitter a response to this question, the meeting was held before the government officially announced opening up was happening. I’m guessing therefore the leagues haven’t started engaging what happens next in case the government did one of their famous u turns so before announcing anything they actually wanted to see it come to fruition!

To pick up the theme from another thread I think it important that we respect everybody’s re-integration into live football attendance.

There will be people wearing masks. Some just inside and some inside and outside. Let’s just celebrate the fact we’re back together and save our views for when we’re back behind our keyboards. Last thing we want is for people who are still a bit/a lot anxious to be made to feel daft or excluded.

Quite right. Freedom has to mean the freedom to wear a mask if you so choose.

There’s no argument regarding supporters travelling from other areas. You only have to read the match thread from Saturday to realise how many of our own supporters, including season-ticket holders live elsewhere in the country, and that will be the same for all clubs.

Outside of anything specifically to do with fans my biggest misgiving is that this testing is going to lead to a lot of disruption to players. This will lead at best to games being uncompetitive and at worst lots of last minute postponements. Newcastle yesterday for example, Darlow tested positive and the other two keepers were told to isolate because they’d been training with him.

EDIT. Doncaster have allocated Newcastle 3,000 away tickets for Friday’s friendly.
So it looks as though away fans at full capacity judging by that, and that’s 115 miles each way.

Doncaster have allocated Newcastle 3,000 away tickets for Friday’s friendly.
So it looks as though away fans at full capacity judging by that, and that’s 115 miles each way.

maybe Newcastle are part of the govt famous pilot scheme?