Anyone remember when we signed him

I remember Bos. Think he came on as sub in one game. Like Walsall s Peter crouch I recall

I remember Crouch getting sent off against us whilst on loan at Norwich. Maybe we should come up with a Walsall ‘tall 11’ against a Walsall ‘oompa lumpa 11’ across time and see which team would come out on top!

Signed him at the same time as Didier Tholot. Not sure he kicked a ball, or maybe as said above made a brief sub appearance.

My standard source for Walsall players of that era makes no mention of Gijsbert Bos, which implies he never actually kicked a ball in anger for us. Didier Tholot was signed on loan from Sion (Switzerland) in the 1997-98 season, made 14 appearances for us and scored 4 goals.

Bos’s entry in Wikipedia says he joined us on loan from Rotherham United in that same season, but did not play in any games for us - Rotherham transferred him to IJsellmeervogels where he stayed for one season before moving on to Huizen.

Yes I remember signing him, I’m sure he made one sub appearance and that was it.

I don’t think Bos played at all. We had Boli and Watson up front that season and wanted a big man so Paul Taylor must have got this guy in. I recall him being on the bench but not playing.

I think everyone remembers what they were doing when they heard about this signing.

I was sitting down in my living room listening to the radio.

We signed Jean-Jacques Eydelie and Didier Tholot when Boli and Peron and lost interest. The two loan Frenchies actually had a lot to do with keeping us up that season.

Tholot has the full Keegan, didn’t he! In fact, it was better!

I was chatting to big fat Jan just after we signed Bos and he said “I didn’t sign him. He’s not going to be playing for any team I manage.”
I don’t think he was too impressed.

8 in 10 goals for Gateshead in 1997 apparently…don’t let me down Geordie…I want full on story about how he, Bos and Micky Quinn were knocking down shots down the Bigg market. 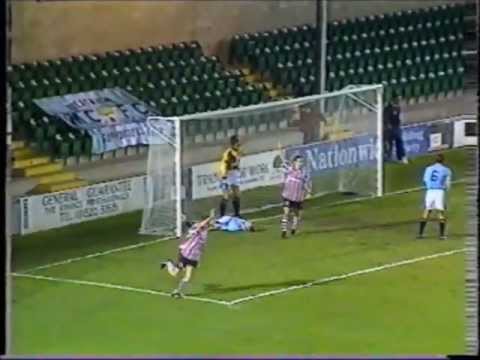 Yes, I think he was named as a sub but never came on. As others have mentioned we brought in Tholot and Idlegit around the same time.

Saw him play in the Reserves. Dreadful. Never made the 1st team but did warm the bench.

It was a Paul Taylor signing. As they all were under Big Fat Jan. Some decent recruitment that Season and certainly there was some good stuff pre Xmas but it just unravelled into a total shambles.

Shame how it turned sour with Boli and Peron, they both handled the situation incredibly poorly.

Tholot and Eydelie were successful seasoned Pro’s but not the sort of players we needed and not surprisingly they found the English 3rd division something of a baptism of fire.

I don’t think I’ve ever heard his name said out loud before! Hushbert Boss.

There’s a great story about Whitney getting ‘too angry’ before games (at Huddersfield maybe?) and Warnock ordering him to sit in the changing room toilets on his own so that the other players didn’t feel ‘uncomfortable’. If the anecdotal evidence is true, Warnock brought his dog into the changing room to calm Whitney down because he was always getting too fired up before going out.

I imagine that’s why, as Saddlers manager, Whitney fell out with O’Connor because Jim always struck me as an intelligent fella who would speak up if he saw an injustice. There was a game at the end of the chequerboard kit season when I think we played a couple of youngsters (Kory Roberts and Mitch Candlin). Whitney hauled off Candlin at half-time I believe (according to rumours, didn’t he make Candlin cry in front of his teammates?) Apparently words were said and O’Connor barely played again after that…

To be fair to Whitney though, I met him at a game once (long story as to why I was there) when he was scouting some players (at Burton v Bury) and he was a real gent. He made my son (who was 8 at the time) feel a million dollars.

It’s funny (and I’m not comparing the two by any stretch of the imagination) but a similar thing happened to me, many moons ago, at Fellows Park when I was 8 and my dad introduced me to some ‘has been’ who I’d never heard of (even though, at the time, my dad was more excited than me about talking to a ‘legend’).