How’s the season been for you lot? I see your currently midtable. I take it you expected to be doing much better?

What happened with Ash Taylor? I see he’s buggered off back to Scotland.

We are currently (not getting hopes up) doing alot better. Struggled hugely to score goals at the start of the season but that’s picked up lately. 6 league wins on bounce for us. Knowing my luck though an average Crawley side will turn us over tomorrow.

We’ve been built on a very solid defence this season with only 15 goals conceded in L2 and 14 clean sheets from our 25 games. Pretty outstanding really with the ever green 40 year old Peter Clarke controlling it all. What a player he still is. Could play until his mid 40’s if he wanted probably.

We’ve still only won 3 away games though. So our good home form would need to hold up to achieve promotion if that doesn’t improve.

We’ve recently signed McPake on loan from Rangers who did well at Harrogate on loan in L2 last season and paid an undisclosed (blimey, we spent money!) fee for Kane Hemmings from Burton. He did well on his debut, didn’t score but pressed great on Rochdale’s keeper for our opening goal. I’m hoping he bangs a few in before the season ends.

Do you have any new signings or potential incomings? How’s Matt Taylor as a manager?

Monthe has been good for us and we really miss him at the moment
Ash Taylor was generally awful and a donkey
Otis we would have liked to stay all sorts of rumours as to why he left
Hemmings should be a great signing at this level we need 4 in before the deadline or its a bottom half finish for us again this season.
Matt Taylor has been ok likeable bloke but he is being hamstrung by the people above him like others before him.

I expected Taylor to be poor. He was poor when he left us 6-7 years ago tbh, and it kind of shows the level of Scottish football that he’s played regularly up there.

Monthe has enough about him to be a very good player. It’s just the silly errors that came about in the end that made it the right time for him to leave us. Glad he’s doing well now though.

Khan was a strange one for us last season. He’d have a great game but then disappear for a few games after. You could always tell he had good ability though. He also filled in a number of positions for us too. Handy player to have in the squad. Could also think he’s probably good enough for L1 level (squad player) if he could be more hands on in more matches.

How’s the season been for you lot?

Been solid especially with homophobic slurs.

If you go up this year we won’t be joining you. We are an average team at this level. I think we could be slightly better playing a more attacking system especially at home. MT has shown his inexperience this season but most of us think he will be here next season when we hope both he and the team will do better.
Monthe has done Ok and we are missing his presence during this 7 match ban for something he said while playing for you. A contribution towards his wages would be welcome

As others have said Taylor was disappointing and Khan came and went rather quickly. A good player on his day but in view of his overall record I did wonder how many good days he has in a season.
Good luck to Tranmere except when you come here.It is good to see “proper” Clubs doing well rather than these poorly attended teams who are propped up by millionaires,

Monthe has enough about him to be a very good player. It’s just the silly errors

Yes, plenty of those silly errors, although when he’s not making those he looks good. When he’s available…

Khan … He’d have a great game but then disappear

Yes, our star player last time we won, and has disappeared to East London.

What happened with Ash Taylor?

He was crap and uninterested, good riddance to bad rubbish.

Rushworth the on-loan keeper from Brighton, and Khan for a short time. Wilkinson in patches.

Do you have any new signings or potential incomings?

How’s the season been for you lot?

Poor results, crap football, decaying ground, clowns on the board…apart from that it’s been OK.

How old are you @Tranmerefan ? I remember seeing us play you in the early 70s with Tommy Lawrence in goal and Big Ron Yeats in the defence. The first player I ever saw sent off was Eddie Flood of Tranmere at Fellows Park, a full back who I think played for you for years.
In happier times we clinched promotion from this division with a win over Tranmere on Easter Monday in 1980.
I’ve been to Tranmere several times and also went to Prenton Park in 1982 I think, to see Telford lose a 2nd round replay, with the prize being Wolves at Home.
Of course you might only be 17 years old and wondering what the heck I am dribbling on about.

Ward and Osadebe, don’t relay that to your manager we’d like to keep em

How’s the season been for you lot? I see your currently midtable. I take it you expected to be doing much better?

Very disappointing. It has been a case of one step forward two steps back most of the season. We have yet to win back to back games. We have several times after a decent result gone into a game v a team that couldn’t buy a win and managed to lose. Although initially our recruitment looked good, the squad has been left with gaping holes.

Most notably only having one natural left back at the club who is 37 years old and blowing out his arse most weeks. And starting the season without a recognised striker. We signed George Miller on loan from Barnsley who started like a house on fire but now hasn’t scored in something like 15 games I think it is. Very frustrating.

Carl Rushworth in goal. Rollin Meyanese who was on loan from Mansfield, we made the deal permanent a few weeks back and he has had a serious dip in form since then, although Monthe being out may have contributed to this. Jack Earing has showed some promise in midfield, although he has been used in a deeper role often and I think a more advanced role would suit him better. I wouldn’t say anyone has been exceptional on a consistent basis.

Started slowly. Began to build a decent partnership with Mayenese. Is currently a few games in to a 7 match ban for an incident that happened while he was playing for Tranmere. Has been costly for us no doubt. Especially as Ash Taylor has been nowhere near good enough and has now left the club, which answers one of your other questions.

Khan looked like he had some quality and I think most Walsall fans wanted him to stay. He probably should have been included in the stand out players answer actually.

Do you have any new signings or potential incomings?

We should be looking to bring in at least 3 players but seems like nothing much is happening. January transfer window is rarely a good time for us. We are far more likely to lose players than bring in anyone that will make an impact. I expect us to sign at least a couple but I’m not really hopeful they will improve the team if I am honest.

How’s Matt Taylor as a manager?

Still has the support of the fans just about. Likeable chap, talks a good game (although he is finding it harder to answer the questions asked of him recently) Seems very stubborn and sticks to one way of playing without having any idea how to change a game. This may be partly down to the lack of options available to him.

All the best to you for the rest of the season.

I’m afraid you’ll have to ring our chairman Palios about Monthe’s wages though!

And yeah the smaller teams with barely any fans with minted owners. Does my head in. We had 10,924 at our place yesterday with only 300 of those Forest Green fans for the 2nd v 1st clash. They are storming (and will win) the league and bring a joke following like that. They were a cracking side but i’d hate to picture their wage bill.

Haha great memories for you.

Unfortunately i didn’t see any of those play for us, i’m 36. Although my body currently feels 56 and after following Tranmere since 1991 (my first game) my brain is just a pile of mush now!

Lee O’Connor (who we had last season on loan too) from Celtic. Cracking player and still only 21. Has a few caps for Ireland already (probably nothing to brag). Been a revelation at centre mid lately alongside Spearing which saw to 7 straight wins before FGR smashed us yesterday.

Also signed Josh Hawkes from Sunderland. Great little player and plenty of Sunderland fans angry they let him go. Attacking mid and along with O’Connor (both 2.5 year deals) could turn into players we can sell on for big fee’s.

We signed a polish keeper other day too, but then loaned him back out. Weird and unexpected signing.

We need to sort ourselves out quick after the FGR hiding. Stevenage Tuesday at home which i’m now not confident about after Saturday’s mauling. Plenty of sides now only a point behind us after the gap had been 6 points. We always seem to mess automatic up whenever we are in with a chance but i’m hoping this year is different!

And yeah the smaller teams with barely any fans with minted owners. Does my head in. We had 10,924 at our place yesterday with only 300 of those Forest Green fans for the 2nd v 1st clash. They are storming (and will win) the league and bring a joke following like that. They were a cracking side but i’d hate to picture their wage bill. 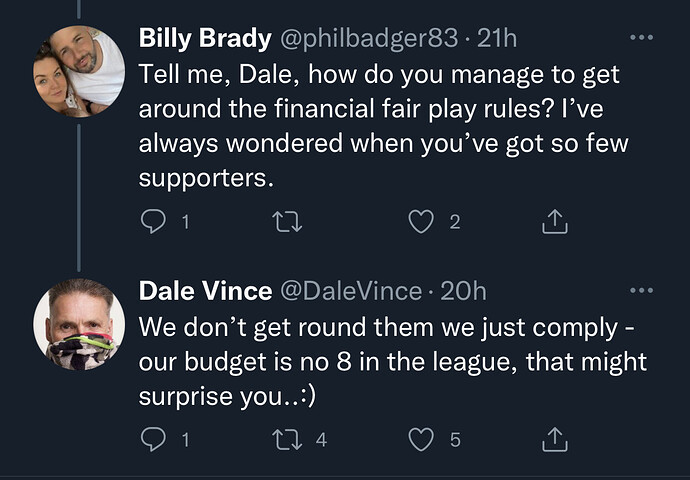 Stevenage seem to have hit a bit of form lately after making a few signings. Of course we started off their upturn in form. I wouldn’t worry too much about Saturday, seems clear FG are streets ahead of everyone else. Mansfield do look a danger though and have the momentum at the moment.

Northampton at our place on Saturday, I would like to say we will do you a favour but I wouldn’t get your hopes up.