If you could revisit one game only what would it be

No matter how long you have Ben a saddler, And no matter how many games attended. if you could choose. Just one game to go back in time to and witness it again what would yours be and why

Remember. Only one game tho can be chosen

The whole day was. Just something else. From Drinking in tavern in the town from. early doors. As the place just. Became. Rammed, and the noise levels where deafening. Inside. , to moving to and from various pubs in the town centre as each one became packed to the rafters, no matter where you went in Walsall town centre that day , all you heard echoing. Around town where chants of here we go Here we go Here we go. and. B U C K L E Y. Buckley. Buckley , can still picture the scenes and here the chants now

Then assembling round the vine pub. To board the various coaches that where running from there, I was on one. Which also contained. Georgie White. So we where. Entertained all the way up there what a guy big Georgie was.

Never seen so many coaches heading up the motorway. And cars. With Walsall scarfs. Flying out the windows as the saddlers faithful made there way to what was. Up to then probably the biggest game in the clubs history

The Approach to the ground. Was met with the usual. Scouser welcome.as the coach had a number of its side windows and back window smashed. But they chose the wrong. Set of coaches this time. as. Fans jumped out of said Windows and exited the coach. To catch hold of a. Few. Who where. Promptly dragged on coach. To receive some Walsall payback. ( But that’s another story lol )

Entering the ground was something else. Just a cauldron of noise as over 10 ,000 saddlers. Had descended on anfield. And the. Complete end was in party mode, I had. never witnessed anything like it. Before and nothing since. For me personally. Cardiff and Wembley come no where near. To the atmosphere. Generated that night

Then the game itself. Liverpool where in there pomp at this time and where dispatching all who came before them with ease

But not this night Little old Walsall gave them the fright of there lives. And matched. The best team in Europe in what was another. Fantastic footballing. Show from. Buckleys. Talented squad

Final whistle. And unbelievably. We had gained a 2 2 draw. , and another highlight was the kop giving the Walsall players. A standing ovation as they left the pitch

But for me it was when the buck came to acknowledge us at the end and just stood there shaking his head , as if to say. Have we REALY just done that that is the standout memory for me

Yes we had Buck and. We had just witnessed what was unthinkable. We REALY had just matched the mighty Liverpool
I won’t say mighty reds. As there’s only one. Team that can have that description , And that’s little old Walsall. The mighty reds from Dh

Well that’s mine. Interesting to see others. Recall there’s 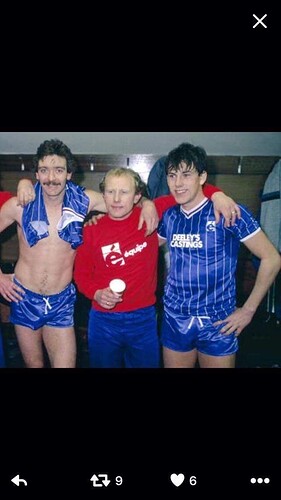 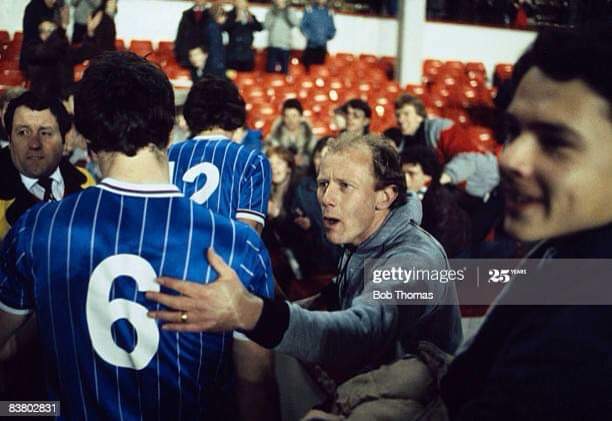 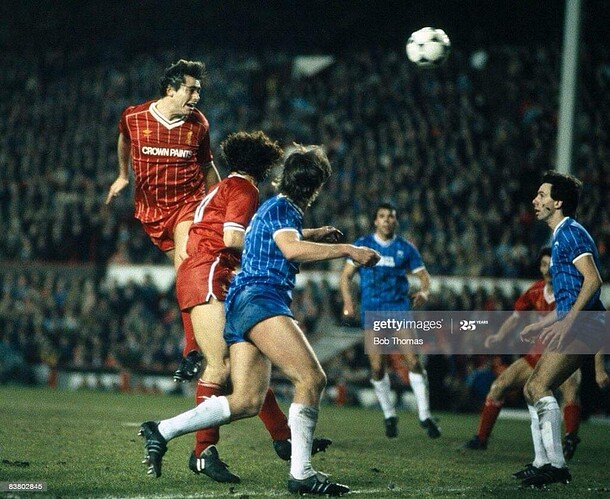 Good shout. Our coach was pelted too, but no windows broken, and we had ball bearing thrown at us in the ground (it always amazes and annoys me when the media paint the Liverpool fans as angels).

Anyway, for me the match I’d like to go back to is the third round FA Cup tie against Stoke City at the Victoria Ground. Stoke were sixth or thereabouts in the First Division (Premiership) at the time. Oh how I was looking forward to that game. I remember, at school in a typing lesson (they made the boys do typing and the girls, wood and metal work) messing around on the typewriter as a make believe vidiprinter - imagining the score to be Stoke City 0 Walsall 2…att 33,000.

When Saturday came we were there in force, at the Boothen End, with the Stokies (no segregation then), with our banners, thousands of us. It was a great day. Soon we went one down and hearts sank, only to be reprieved - the ball had burst through the net from outside the goal. The game was delayed while string was found to repair the hold. Then a another delay, Jimmy McMorran was the victim of an awful tackle and needed lengthy treatment and was a passenger out on the wing for the rest of the game (no subs in those days). Effectively we had ten men, but still went ahead, a rasping shot from the right by Howard Riley.
And then as the half came to a close, inexplicably, the Stoke keeper Irvine, ball in hand, kicked out at Allan Clarke, as her trotted past him making his way out of the area. Penalty!. Clarke, my hero, stepped up and made in 2-0. I can’t remember the second half much, it was a blur of emotion, mounting excitement, anxiety and noise.
The next day the Sunday Mercury added to the excitement with a souvenir centre spread of report, interviews and pictures.
Stoke City 0 Walsall 2 (att. 32,676) - that would have been worth a shilling or two on Betfair! - if such a thing had existed then.

NB: In the statistics section of the book ‘The history of Walsall Football Club 1888-1992’ (Tony Matthews and Geoff Allman), the goal scorers that day are listed as George Kirby and Allan Clarke. Kirby is an error. It was definitely Howard Riley - an error not spotted or noted in the erratum, either.

Crewe away in the Play offs, I wouldn’t bother and stay at home

Christ, I remember being there! Such an anti-climax and that it was Crewe just rubbed salt into the wounds!

Probably the last game at Fellows Park, I’d only really had one season as a fan By then so it’s significance never really sunk in.

Failing that either Stoke in the Play Offs to get to Cardiff or the JPT game to get to Wembley.

Didn’t even go to the other leg of the Crewe game despite having a ticket.

For me the 4-0 play off final replay at Fellows Park v Bristol City in May 1988. After losing 0-2 in the home leg I thought we’d blown it despite winning 3-1 at Ashton Gate. and I thought City would go on and win it. By the 20th minute of the replay and 3-0 up we dared hoped to think it was going to be our day and we would complete the job. As soon as the 4th went in mid way through the second half we knew we’d be back in the Second Division after a 25 years wait. The elation and emotion that we were going up was epic. I’d love to revisit that afternoon and taste that success again,

NB: In the statistics section of the book ‘The history of Walsall Football Club 1888-1992’ (Tony Matthews and Geoff Allman), the goal scorers that day are listed as George Kirby and Allan Clarke. Kirby is an error. It was definitely Howard Riley - an error not spotted or noted in the erratum, either.

In The Saddlers; The Complete History of WFC by Matthews, Allman and a couple of others which was produced in 1999 it also gives the scorers as Clarke and Kirby in the season by seasons statistics section. However in the earlier bit of the book where it reviews the highlights and lowlights of our history, the brief report of the match says Riley got the goal.

There were loads of mistakes in that book.

I went down to Bristol on that day we won 1-3 without a ticket. Went all round the ground asking if anyone had a spare ticket with no joy. Walked in to the ticket office in desparation about 15 mins before KO to be told as expected that the game was sold out.
Then a girls voice at the back of the office said “hey I’ve just had one returned in the main stand”. I’ll have it I said, they looked at me hard as it was a home stand, but then took pity and sold it to me. What a fantastic match. I’d love to see that again. 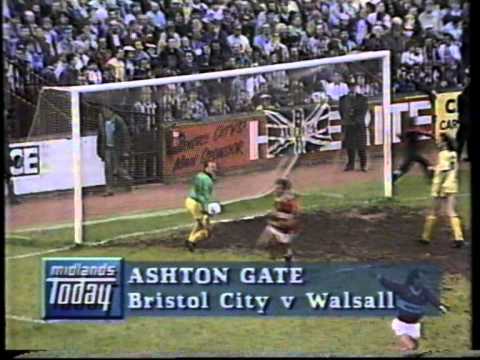 Mine would also be the Liverpool match. We too had our windows in the coach smashed but it was such a special night.

That would be my match as well, because i missed the first 20 mins

I reckon I would go for one of my earliest games, a 4-3 against Brentford when Colin Taylor got a hat-trick and Allan Clarke scored the winner. Then I would have seen a great game and still have most of my life ahead of me.

If not that then the bomb-scare Bristol Rovers 4-3.

Bury away 1995 what a night after 5 years of suffering.

Really tricky to name one. But I’d have to agree with the OP on this.

First ever time to Liverpool the city and now I’ve lived around here for most of the last 30 years so would love to go back in time but knowing then what I know now.

Was a bit scary after the match but in time honoured tradition my dad and his mates led us to a boozer. “You got the taym lad?” , pints quickly supped and we were off. I slep in the back of an estate all the way home, dads mate had a video so had recorded the match and we watched it again. A Match of The Day Special. And we were indeed special.

School the next day was hard word.

I missed the the liverpool game (was in the first year of my degree studies at that esteemed seat of learning Portsmouth Polytechnic) and the Bristol City games (had just met my wife of 33 years and was temporarily distracted from my love of the Saddlers) - so for me its the 1-0 win against Newcastle back in 1975. As a kid of 9 beating Man Utd in the previous round was an amazing experience - but it was all a blur. But I can remember the mud bath of a pitch, the surging run down the left flank of (Colin Harrison, Roger Fry, John Saunders? Not sure which - what fabulous players all 3 of them where though!) the pinpoint far post cross for gorgeous Georgie Andrews to time his leap to perfection to nod the ball home.

Quite afew mentioning Bristol City which reminded me of the amazing 4-3 at Brizzle Rovers after being 2 down within 5 mins.

In my memory, it was Roger Fry.

It was deffo Roger Fry.

Yes definitely Roger Fry, but from a free kick rather than a surging run and cross, from my memory.

For some reason Arsenal away for me (the 2-1 win) just pips it on the “magical day/night” front out of many including those mentioned above that are within my memory.

Honourable mention for Macclesfield away also which was a pivotal life balance moment for me.
I was asked to work the Saturday at the horrible job I had at the time working for this well dodgy Italian clothing retailers on an industrial estate in Gateshead, it was HORRIBLE!. I refused, jacked my job in, went to the game and got a much better job just over a week later, and the bloke that was insisting I gave up my train tickets, match-tickets and worked while Walsall won 7-0 away… got to avoid what ever would have happened on the Saturday working with me in a windowless industrial unit as the score came through on 5 live.