Given the chairmans statement today and asking fan groups to push on with ideas. Both Issa and Walsall supporters for change have took to the club, Issa will be doing the following.

We will early next week hopefully be sitting down with the slo of walsallfc FC, and Alex. From the commercial department to sort out the mechanics of a direct debit scheme Issa will be implementing

It will be open to every single Walsall fan wether a member of any particular fan group or not , and you will be able yo make a regular payment starting from as little as a pound. To no upper limit per month dependent on your own circumstances and level of donation you wish to commit to

Issa will welcome the input of other fan groups if they wish to play a part in our scheme, We will also offer our help and input. Into any other. Fan group led scheme that is set up to aid club.

I would urge all fans to follow the follow the chairmans request today not to accept the. Compensation package. That is to be announced early next And leave your money in the club, If at all possible

Id also urge fans to ignore the rent issue for the time being, That has to be paid wether we help as fans or not, But just remember whatever. Side of the fence you. Sit. If rent could not be furnished. The consequences are unthinkable,

The rent issue can be fought another day, And no doubt our owner will do so when this current crisis is over, But for know it’s all about survival. And as fans let’s come together and help the chairman steer Walsall FC to. Survival,

People say why should we help. When. A certain someone won’t. And my answer is. Yes I detest the freehold scenario with a passion. But It’s our club, , it’s our. Walsall FC. It’s the club we all love, and. It would be unthinkable of it not surviving the crisis it faces at this present time. Don’t be under any illusion. That the club. Is not in danger. It most certainly is. , and I’d much rather. Try to help. Than turn my back on it. Just because of the rent issues , as said that issue. Can be tackled at a later date

Sure most can support this idea for a few months. £10 a month whats that less than a pint a week to help our club and chairman through this difficult period .

Following this exciting announcement I’ve never seen details around the set up and payment methods for this scheme.

Are the details posted elsewhere?

Unfourtanstley. That despite numerous attempts. To launch this scheme. We are still trying to find a way. But club are being. A bit unhelpful to say the least

Walsall.fc. would not furnish us with a bank account details. for supporters to direct there payments towards, They said they could not facilitate the scheme as due to having only a skeleton staff they could not. Administer the payments And it would prove. To time consuming

They requested that Issa received all fans donations and we ( Issa ). Would. Then make the payments received. To the club on a monthly basis.

An organisation of Issas. Size. Could not. Oversee such an operation. Ie dealing and separating. All line payments etc, But even more so we where not prepared to have such large qty,s of fans money being in our care. We do operate a business account But it is not geared up to facilitate what club was requesting of us, And we only account for our own. Activities. Within our. Financial accounts

We had in excess of 150 pledges, of supporter. Wishing to commit to the scheme. With a minimum monthly donation of £10. With others ranging from £10. up to and including one Issa member pledging £200 and this was proven to club. When myself. And two other. Issa committee members. Attended meetings with senior personnel involved with wfc

We found it rather puzzling that club state they can not facilitate such a simple scheme, with the infrastructure they have in place already. , And especially. With the. Expertise they. Have on hand. It should have been. A simple task, But Issa as said will not be responsible for what could quite possibly have been large qtys of fans cash and neither should we , and we hope fans understand. Why we are reluctant to do as club asks.

Despite the set back Issa will still try to help club via our financial donations, These will come via money set aside from our merchandise sales via our online store, And when the covid sittuation eases via our many events we have. Lined up with the help of ex players.

As said. We find clubs reluctance to administer scheme a bit baffling to say the least, But have to respect there decision, Despite. The fact that they. Knew many wanted to contribute,
Let’s not forget that Issa raised in excess of 5 k in just over a week. Which we handed over to club, As a donation, But. We where not in a position to be able to manage. Overseeing something. that had the potential to raise far in excess. Of. Our last fundraiser for club, And we thought club would have jumped at chance. To. Help facilitate our idea

We found it rather puzzling that club state they can not facilitate such a simple scheme, with the infrastructure they have in place already.

Maybe the club is puzzled as to why you would suggest a scheme but want them to do all the administration?

You say it’s too complicated for you to do but then think it’s simple for the club.

The whole reason funds are being raised is because the club is going through a period where their finances are being affected and they’re running on a shoestring so of course they’ll be running on a skeleton staff.

Maybe direct all of the people who pledged to add to the Just Giving site set up by WSFC then all the payments will be dealt with by Just Giving and the money will still get through to the club.

No because ISSA couldn’t take any credit for that .

This was suggested but fans where not interested in doing this as many don’t like the fees, charged even tho minimal

No wish to argue the point. Issa will not be responsible for large sums of fans cash end of and neither should we be expected to, If club where so desperate for cash, they would have found a way,

Scheme was simple as in they have. The infrastructure already in place Would have taken Issa
Months to instal, such a system

Maybe you should be questioning why club are requesting as much help as possible from fans. Then. Changing goalposts hslfway through the project

We had meetings st which this was discussed. And agreed to then when it came to them giving us the dedicated account for the scheme. They didn’t want to
Again ask them why they did. This, instead of trying to pick fault with an organisation bending over backwards to help club, or
Does this not fit your narrative

I will just take my £200 elsewhere

Why would issa want to take the credit for it. When it’s the fans who wanted to do it, I don’t think you grasp Issas concept mste, We always credit the fans as it’s those who make what we do possible,

Yes but surely giving to the site that rob Harvey set up is better than the donations stalling and not getting through to the club at all.

Thanks for the response(s) @Dhforever.

It does seem a shame with the club making redundancies and staff taking pay cuts that this was lost as all of the points in your well made opening post stand.

Also in your opening post you stated that you would support efforts by all fan groups to raise cash in these horrible times. So I think it would be great for you to use ISSA’s reach to promote the one schem that is in place to get cash into the club.

I note the point on fees which I think are 19p for every £10 donated (maybe @RobHarv3y could confirm?). So if you felt you should make this clear when promoting the scheme it would help.

I know ISSA will be generous in their donation to the club from what sound like fantastic merchandise sales which will be a massive help. The issue there is obviously time. So when I ordered my lovely T shirt (and it is genuinely really good - I’m chuffed with the quality and the value and service was great too!) in July there will be a bit of a lag between me paying and the club receiving its share. Just reading about people losing their jobs at the club makes it sound like the situation needs some urgent cash.

So I think in the absence of a discrete ISSA initiative, in the spirit of your opening post here, it would be great it you could propagate the one scheme that does exist to get cash into the club quickly.

Thanks again for the response.

Totally agree mate. I’d urge any fan. Who wanted to be part of our idea. To now back robs, And get as much aid into our club as possible. Not all ideas come to fruition and club obviously didn’t want to facilitate this one , but whilst wsfc still have there site live I’d urge all Issa members to supportt it 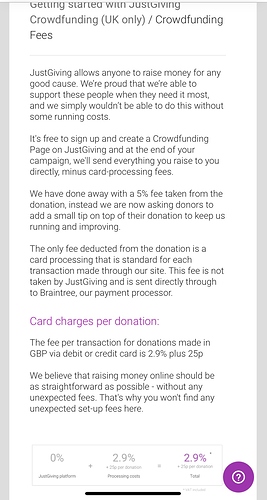 FYI - all fees are card processing fees and do not go to JustGiving.

We have already been telling the ones who pledged to back our scheme to now. back robs mate.

, as I’ve said to another poster. we all support same team it’s immaterial what group gives what or who gives the most , What is important is. As a club we survive, and Issa will do everything it can via its own activities, And joint ones with other groups. To ensure it does

Ps glad you where happy with your purchase mate

Maybe when the current scheme gets to its initial £5k goal you and WSFC could get your heads together for the next push? Like you, I don’t really care which supporter group acronym get “credit” it just feels that if ISSA backed a scheme would get a greater reach and therefore more emergency cash which is what it is all about. You could see if with your help we could get to £5k even quicker than Rob’s marvellous efforts have with the first push?

Just a thought. But in the meantime let’s all do our best to get through that first £5k milestone this afternoon.

Just so people are aware, the £5k was the initial target but the page is open and can take donations past that up to April 2021 which is when it will close.

Are any other footy fans raising funds for their clubs? and if so how much have they raised?

Sorry to have blown your cover. Pal, But you had had about ten pints in railway when you made the pledge lol

Not at a similar level as far as I know. Possibly wrong though.