Josh is a winger then 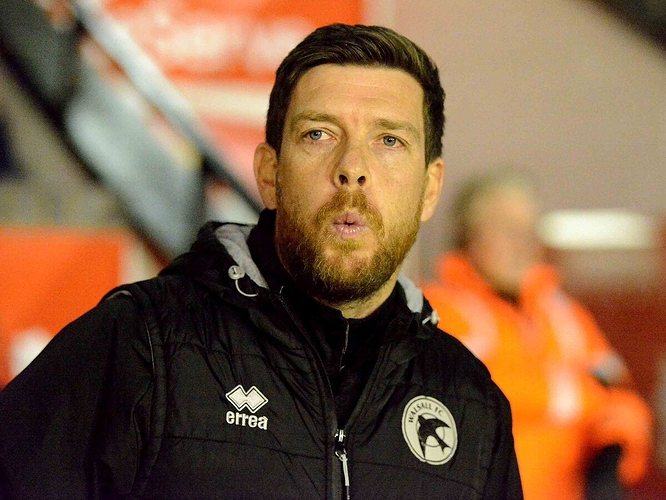 Walsall manager Darrell Clarke does not believe his decision to play striker Josh Gordon on the wing in recent weeks has contributed to two consecutive losses for the club.

We already have 2 wingers,Nolan and Mcdonald,it doesn’t matter whether you’re left or right footed,if you’re left footed on the right wing you can cut in and shoot,or check,and cross it with your left foot,and visa versa on the left wing,I say put Gordon up front with Lavery,and play our 2 wingers.

No signings then. Looks like he genuinely believes we are better off with Gordon right wing and Adebayo up front rather than, you know, having a proper right winger.

I particularly like the bit where he admits he got it wrong:

“Is it right? No. When you lose as a manager you don’t make right selections, it doesn’t matter what you do”

And then completely contradicts himself in the next bit of his rabble:

“Did we lose the game because Josh Gordon played out wide? No.”

This thread title is severely misleading,

He said that the selections were his fault, but he said that playing Josh out wide was not the cause of our defeat. Those two statements are not mutually exclusive.
If he considered that other selections were wrong but Josh on the wing was correct then both statemnets are true.
I believe we lost the game when Wes McDonald insisted on taking the penalty. If Josh Gordon had taken it and scored then Morecambe would most likely have folded as their confidence would have taken a hit. I think it also affected McDonald as he was not performing at all after that and he is a confidence player and the miss would have played on his mind particularly after insisting that he took it.

We’re a far far better side when Gordon and Lavery are up top together. Anyone can see that.
Darrell needs to stop over complicating, stop being stubborn and stop sounding like Whitney.

Although you could argue that Flash has made a fist of being a “wide forward”, he’s obviously much better in a central role either alongside or just behind another CF. From what I’ve seen so far (admittedly not at the training ground which apparently is the only place to show DC what you’re made of, not during an actual match) Ayli is actually a better option cutting in from the right than Flash or Colin (or indeed Daphne) - much more so than being a front 1 or 2.

So playing your 3 available forwards with 1 as a wide man is a valid option - but would have made more sense if Flash and Ayli were switched in their roles (although Flash is by far the better option to help out his FB when we’re on the defensive - something that McDonald doesn’t do well on the left in front of Pring or whoever - thus if the aim was to stop Morecombe instead of trying to overrun them perhaps this was the best plan to follow?) It makes less sense though when you have a specialist right winger on the bench so could have played him plus your 2 best forwards in the middle with the other on the sidelines in case you need to bring him on to freshen things later. And to take arguably the better of the 2 off to bring the winger on (leaving you with 2 forwards - and then later just 1) makes even less sense. But then I’m not a manager with badges who sees what happens at Essington.

While I’m at it, not sure I agree with the flak that Sheron has been getting. Don’t think he did anything particularly wrong like miss tackles and give the ball away (unlike what Liddle got it in the neck for), he was just anonymous so that you almost forgot he was on the pitch.

Then again, I have to admit to being a bit meh about Sinclair. I know he’s a bit of a favourite amongst some of our fans, mainly because he is more noticeable and buzzes about like a annoying fly at a picnic, but he’s more of a nuisance factor than anything so far as I’m concerned. I agree he has a high work rate, and often does disrupt the flow of the opposition’s attacking moves, but how often does he actually overturn possession and put us on the front foot rather than just make them take the long way round him? To me Kinsella or Bates do that role much better - they come up with the ball and knock it forward rather than 5 yards sideways/backwards. To be honest, the player we’re could do with in there is Dobson - much more of a loss than Cook or Ferrier.

Just play people in their proper positions! Its over complication. There was never this endless faffing about years ago and players could manage 3 games in a week too!

Just as Flash & Lav are getting an understanding Mr Tinkerman tinkers and results suffer, whoulda thunk it? Not Tinkerman obviously!

*“I wanted to play two up top and I wanted to go with Adebayo because I thought he did very well against Carlisle and has scored good goals previously. *

*“I also knew that we were coming up against a big physical team and he gives me a bit more height and presence in both boxes. *

Is he real? he may have height but he has the physical presence of a jelly.

I say put Gordon up front with Lavery,and play our 2 wingers

I completely agree with you. Of course, neither of us have badges, so what do we know.

Some very good points there.
I actually think Gordon as a wide forward is okay but when it is in a 4231 so he can still run channels and link with Lavery okay (they did this quite well at Salford and swapped roles a few times in the second half). He is more wasted in a 442 as he is wider and so less effective / involved.

If we played the 4231 well, it should give us the 4 attack minded players and then the 2 deeper centre mids can do the job of getting across to help out the full backs more, so less reliant on the two wides in the 3 having to do it (which they probably won’t, especially Wes, anyway).

He’s ■■■■■■■ mental then. Play your better performing players in their proper positions instead of make shifting it all over the place.

Personally I don’t think he’s in any position to be lecturing anyone on which position it was that cost us the game considering he’s just held his hands up to getting it wrong anyway.

I actually think Gordon as a wide forward is okay but when it is in a 4231 so he can still run channels and link with Lavery okay (they did this quite well at Salford and swapped roles a few times in the second half). He is more wasted in a 442 as he is wider and so less effective / involved.

You’ve nailed it there. He’s clearly one of those players that can play attacking midfield but not right midfield. It’s a completely different position with different responsibility.

Not doing a good job of covering his crazy decisions. Wish he would get everything settled.

Totally agree, and let’s just put the “height in both boxes” rational out there. We were playing Morecambe at home! The team with the worst away record in the bottom division, and we’re picking our centre-forwards with half an eye on what they might contribute defensively!! Its ridiculous beyond belief, and then when you add in the fact that their centre-half scored with a completely unchallenged header from a corner It didn’t even work FFS. And if he thinks Adebayo “did well” at Carlisle…this is what the E and S reporter said about his performance that day when giving him 4/10, “Adebayo huffed and puffed, and he certainly tried, but it didn’t work for him. He had one or two chances, one of which he should have scored. In the air he needs to win the ball much more for a tall player”, absolutely bang on from Keen there.

Adebayo was bang average against Carlisle, just like the rest of them. He’s talking absolute ■■■■■■■■.

It’s funny, I could swear I’ve seen far more top drawer players say from sucessful teams say in interviews “we never worried about what the other team were doing we just concentrated on ourselves” than say we forensically analysed every team we every play against.

I can just see it now. Jurgen Klopp in the dressing room. “Right Mo, I’m afraid you’re going to have to sit this one out … I know it’s Norwich at home, but they’ve got this big ■■■■■■ at left back you see so I’m going with physicality”.

If he had actually recruited correctly originally then he wouldn’t have the problem.
Every team we have played good and bad have had tall athletic players in midfield it’s a basic requirement in this league ,we are sadly lacking our midfielders are not comfortable making runs into the opposing penalty box and struggle to win the Ariel / Physical battles in midfield

Exactly with the season written off not going up or down . Forget for the most about other teams strengths and concentrate on playing some attacking football with a set formation and a settled team ffs Clarke.

If he thinks Adebayo offers strength and ability in the air then he is living in cloud cuckoo land!

If Lavery and Gordon are fit, they have to play upfront together. Simple as that.