Labadie out for 9 months acl same as Wilkinson
That’s 2 wages out already for next season. Going well isn’t it
Get well soon joss

He hasn’t set the world alight but I felt next season he would be a key player having the whole season under Flynn. Probably our 2 top earners on long term injuries. Hope the Poundland money is going to give Flynn room to manoeuvre

That’s another kick in the knackers for the budget. 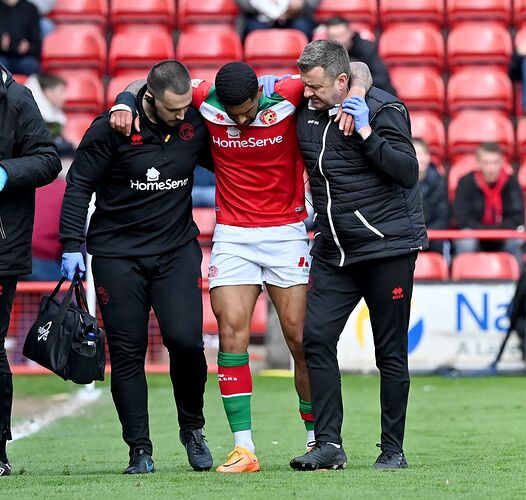 Walsall have been dealt another devastating injury blow as captain Joss Labadie is set for around nine months out with an ACL injury.

Bit of a blow for next seasons budget. Another that will have to be replaced in some capacity

Wow, next season looks a write off already.

Great start going into next season. I know Labadie has not had a great season but I felt a pre season with Flynn and Hatswell and we would see a different player next season.

Got to hope Perry can step up next season now. I think MF’s plans for a bigger squad may have gone down the drain.

Exactly… we will be shopping at Poundland. Oh hang on a minute…

key player having the whole season under Flynn.

Maybe but I’m not sure he’s been any better since Flynn came in. Still seemed more interested with kicking other players than passing to a red shirt. Indeed, that’s how he got injured.

I’ve just done my acl walking to work wonder if my gaffer will pay me for 9 months?(it’s a rhetorical question) I’m in the wrong business I think.What frustrates me personally is how crap some footballers play for 80% of their careers then when something like this happens they get paid sometimes I think they need a reality check to see how lucky they really are.Anyway back to Labadie hope he comes back he’s no spring chicken anymore this could end him.

Yep, given his age and his playing style it could be a career ender.

I was always under the assumption that clubs have insurances that covered wages for players out long term ?

Why don’t footballers get sick pay like everyone else?
Especially if the injury is caused outside of work or doing something stupid like you making the foul when you shouldn’t?

I think you are insured for if the player has a career ending injury and you don’t have to pay up the rest of the contract, more than a weekly wage while they are out, but I don’t know. That is based completely on Football Manager

What’s happened to Bonser then?

Why don’t footballers get sick pay like everyone else?

If anyone loses time for being injured at work, they are eligible to claim compensation for loss of earnings, or in the case of reputable employers, would continue to be paid while off work.

Insurance on players is always up to the club. It costs, so it’s an expense we may not be able to afford. I’ve no idea if the club buy it. I hope they do.