Matty Taylor currently leading with 75% of the vote

Bit of a laugh reading the comments …

It’s taken some time to dismantle the awful culture that DC created at Walsall. Matty T is working his magic. I just feel sorry for Vale, the truth will out with Darrell, he’s a danger to any organisation.

Now recovering from the mess left by Darrell Clarke

Link not working. If there are gambling adds then my blocker is stopping it.

Voting now appears to be closed!

It’s only cheating once, in a limited and specific manner…

Matt has piled up more votes than all the other nominated managers in every league have managed in total!
Is it an omen?
Exciting times.

I think I voted a few times :shifty:

Lump on us losing our next game once it’s officially announced!

As mentioned above the vote has no influence on the outcome.

You do all realise this is NOT an official Manager of the month vote.

The ‘real’ manager of the month is decided by a panel of experts, assembled by the main league sponsors.

You do realise that this is the 2nd thread on this momentous voting opportunity?
Never let it be said that Saddlers fans don’t punch well above their weight in clickbait site participation.
What a time to be alive.

Matty taylor , young up and coming manager , keen with probably good knowledge of the game and contacts ,But what I will say is he seems to have some fire in his belly ,Seems to have took well to the club ,not sure if this is to better himself or he is genuinely happy where he is and what he’s doing ,time will tell ,But the fans must back him thru thick and thin times and also needs the backing of the owner and the board as we’ve seen it all before .doing so well and players become head hunted time after time and the managers seem to loose faith ,So it’s time for the club to back Matt now hold on to him and show him they are in this for the long haul.It’s really that simple.

Completely agree with you. If the team is in or around the playoff picture come the opening of the transfer window, I’ll be very interest to see how Mr Pomlett plays it. We all know that Jules, and Adebayo in particular were sold without genuine replacements but we were very much a middle of the road league two club.

This time round, if we’re still making a genuine fist of it then Leigh could really get some supporters on side by making a statement of intent and really backing the manager. On top of this, he would finally dispel the myth of Bonsor still pulling the strings. If that’s not the case then he’ll have a fair few more accusations thrown his way. 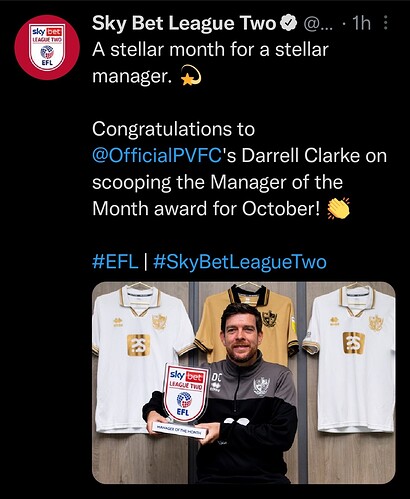 Oh no - another f***ing badge for him to tell everyone about!

Got a bit of David Brent about him there… 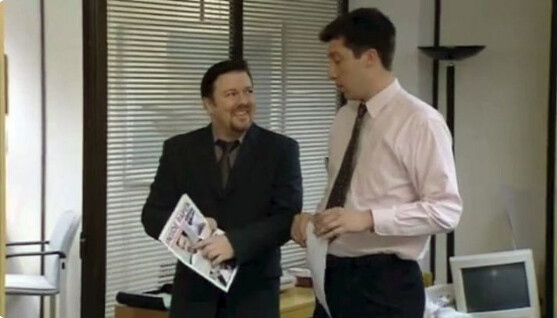 Clarke will take them up, he’s doing a great job… fair play.

He is doing a great job there at the min. But it’s still early days and a very happy camp. Im hoping we beat them and he really shows his ugly side and loses the dressing room after throwing his players under the bus.

How can Clarke fail when he has a squad of 30+ players compared to our 18!!
Also he has several coaches, a quality assistant manager, and loads of dosh to spend in Jan.
For Matt to get on the shortlist was a massive achievement in my opinion.