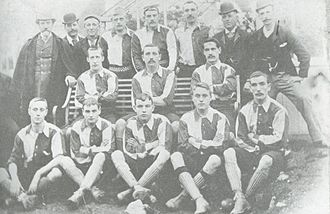 Walsall Football Club was formed in 1888 when Walsall Town and Walsall Swifts amalgamated. They joined the Football League in 1892, as founder members of the new Second Division. The table below details the club's achievements in all national competitions and records their average attendance and top goalscorer for each completed league season. Key to league record:

Thanks …a very interesting history there.

Interesting read. Just two players hit the 20 plus goals in the FL season in nearly 30 years at Bescot- Killer twice and Wayne Clarke.

We were getting some impressive crowds right after the war and in the 1950’s. The club would like those days back.

‘Killer’ and little Kev Wilson were a great partnership and worked so well together.

Dunno, saw them both - Lightbourne was excellent at that level with Wilson, but not the finished article - missed some crucial one on one’s (Leeds / Ipswich), but Bradshaw was the more reliable finisher. Jorge better than both for sheer style.

67-8 we led the 3rd Div table for 3 months from October when the crowds went up. In typical Walsall fashion we faded somewhat from the February onwards and finished 7th. Hence the heathy band of ‘floaters’ disappeared for the start of 68-9.

Jorge better than both for sheer style.

Absolutely loved Jorge for his commitment and general play, still one of my favourite players. However, his one on one record was terrible (hence he didn’t score even more).

Jorge’s brief partnership with Junior was one of the most exciting we’ve had. Two very good second tier strikers when at the top of their game.

We were bottom, or bottom but one at Christmas and we’d had a shockingly bad 1982, so the crowds had dropped off because we were so terrible. We played some great stuff in the second half of 82-83, but were never in with a chance of going up (no play offs then) so that explains it in part.
Also the recession was in full swing, unemployment was high. Those big Black Country firms that employed 10,000 to 20,000 people were cutting back, or even closing down. I think crowds would have been down almost everywhere in the early 80s.

Some interesting stuff there. I wish we had a player called Hubert Parsonage in the team now, what a great name.

There was also a general fall off in gates as football violence became prevalent around that time.

Spot on …that was the season the crop of youngsters started to come through…Preece,Shakespeare being 2 examples. I remember saying to my mates we have the makings of a really good team here and so it proved in the following seasons however the “gates” were still disappointing when one considers the quality we had in that Buckley team.

Yeah I should’ve remembered. That was the year I had to move down south to get a job. Put a temporary hold on my attendance too for a couple of years.

So “prevalent” that I attended every single home game in 68/69 and can’t recall seeing any violence at all.
Maybe I was just lucky and there was mayhem occurring on every other section of the terrace apart from the one where I stood?
Could one of the retired hooligans cast any further light please (probably best on the reminiscence thread, in the faint hope that this thread stays on topic).

I agree …I wasn’t referring to Walsall only. It was the whole scene and football was getting a bad press. As for the other thread I must admit to being surprised how much went on…I usually managed to steer clear of it although I remember once helping a family from Bristol when there was some violence on the railway bridge next to Fellows Park. I won’t say more because it would be good to keep this thread on topic.

On attendances as has been noted, there is a pretty sharp decline in 1968 and thereafter we tend to bounce around between the 4K and 5.5K mark.

Been checking out some figures and looking back over the past 5 decades (taking 1970-71 season as the starting point) our average attendances in the third tier by decade have been as per the table below. (I put the 1960s average in for comparison - again averaging the 8 seasons we were in Div 3 that decade). Of course there are some spikes and some lows but across a 50 year time span I think it is striking how little our average home attendances have shifted at Tier 3 level. 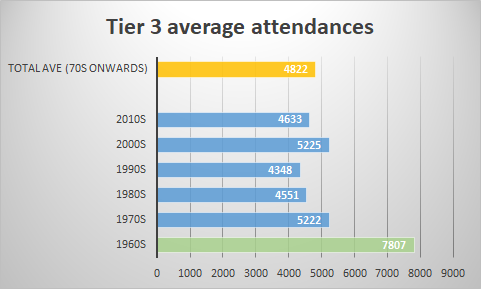