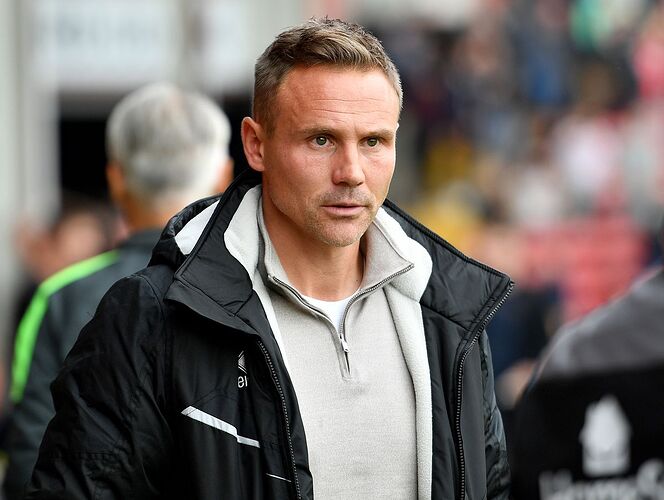 Boss Matt Taylor admits Walsall are at risk of having their loan stars recalled by parent clubs, adding: “It’s part and parcel of the game.”

Im a fan of loan deals and I think they’re pretty vital at this level but this does not sound good.

It sounds to me like one or two have already decided they don’t fancy it here much from this:

“One thing I will say is that all the players have their own minds. They have their opinions on where they feel is best for them to play their football.”

Miller has spoken at length about how much he’s loving it here so I’d suspect maybe Rushworth (rightly) thinks he can play at a higher level and possibly Phillips, or Menayese fancies a crack at his own club (again, rightly).

With Shade I wouldn’t really care either way to be honest.

With Shade I wouldn’t really care either way to be honest.

I’ve been underwhelmed to be honest with Shade. Shows glimpses, but he does very little to impact a game. Strange because he has all the attributes.

Unfortunately he’s a good option to have in a threadbare squad, and also the least likely loanee to be recalled. Think the ones likely to depart are those who may be saleable in January (Miller, Phillips), those who might get a game for their parent team (Menayese) and then Rushworth who fits into either category.

His first game at Tranmere was very promising, but he’s dropped off since. Strange one as he seems to have all of the attributes.

Its always a risk with loan players that their parent clubs may recall them or other clubs may offer them permanent deals. Of the ones we have I think Miller and Meneyese are the most likely to go in January although if Phillips continues scoring regularly he may also be wanted elsewhere. I would hope that Walsall will do what they can to sign them permanently. A good question methinks for the forum.

The problem is that the loan players should supplement a squad - not be the core of the side.

Rip Rushworth, Mayo, Miller and Phillips out and we are in some serious trouble.

The fact we have one recognised centre forward at the club - who is on loan… is a joke.

Rushworth is only serious one in danger imo of going back. He’s getting called up to under 21s now so Brighton could easily conclude he should be playing at higher level than bottom half league 2, will certainly be interest in him. Bit like when Tyler Roberts went back.

Would be disappointed if the others went back, I mean Rollin’s been out of favour at Mansfield with Clough obviously not rating him so surely he’s one you look to sign on a permanent 2 and a bit year deal.

Huddersfield doing well so don’t see the point of Phillips going back given he’s starting most weeks and this is probably his level for now.

Miller a tricky one as Barnsley might fancy cashing in but again in last 2-3 years he’s had some rubbish loan spells so surely the player would want to stay for the season rather than go somewhere else and just bench warm again as he did at Bradford and Scunny.

It’ll only be Shade I think he’ll be talking about Miller has only been here 5 mins and Barnsley won’t want him back at the level they are currently at I think Rushworth is enjoying his game time and would be happy to have a full season of game’s behind him .

Shade’s someone I just think you keep for whole season and hope penny drops. As said before Gordon and Adebayo struggled with transition from under 23 football to regular week in week out league football for first 6 months bar odd goal so just got to be patient.

Probably shouldn’t have been hyped up so much when he signed which hasn’t done him any favours given he dosen’t have much idea how to track back and help his fullback. His goal at newport does show he has something if you can get the ball to him in final third and at least he’s a pace option off the bench currently.

Rushworth is only serious one in danger imo of going back.

Yeah and I think the others are pretty much replaceable in fairness. Question is do you back us to bring in the right targets?

Bottom line is the players brought in on loan or permanent have to be of top half league two standard, I couldn’t really care less what the basis is. I’m not sure I back our recruitment process to identify those players though. They were, to be generous, about 50 percent successful in the summer by my eye and most of the successful ones were loans. If we lose say Mayo, Rushworth, Phillips and Miller in a worst case scenario I can’t see them having the vision to bring in 4 good quality replacements.

I personally don’t think any will go back but you have to wonder why MT has come out and said this, out of nowhere. Could it be one or two are about to go back soon and he is playing his hand through the media to stress to the board that he wants them signed?

Would love to Miller, mayo and Phillips to be signed in January. Can dream.

That would be my guess mate, wouldn’t shock me to see Rushworth go back soon.

He was answering a question asked by E&S reporter so didn’t really come out of nowhere.

Oh did it not. I didn’t read the full article. Apologies.

He could have suggested beforehand to the reporter that he should ask a question along those lines. I’m not saying he did, but he might have done, if he did in fact want to make a point to the Board.

This is why loans aren’t ideal because you can’t actually win can you…because your either end up with an Osei Yaw and the parent club are glad to see the back of him or you end up with a George Miller and they have him back to cash in because he’s been brilliant for you never really been a fan of it no matter how many league two teams have to do it blah blah.

If Barnsley have Miller back in a couple of months and sell him for £100k to a club other than Salford or Bradford in our league Pomletts statement about us being better off post pandemic will be another stick he’s pulled out to be beat around the head with.

Thing is, we all know that is exactly what is going to happen.

Yep. It’s quite predictable. It even happens with bang average players like Scrimshaw never mind decent ones. If the club isn’t attractive enough for the loans to want to stick around or, God forbid, move here permanently then what the hell is going wrong behind closed doors for people to go “nah, I’d rather play for Newport County tar”.