Great Q and A in the Guardian today if anyone knows how to copy it on here. 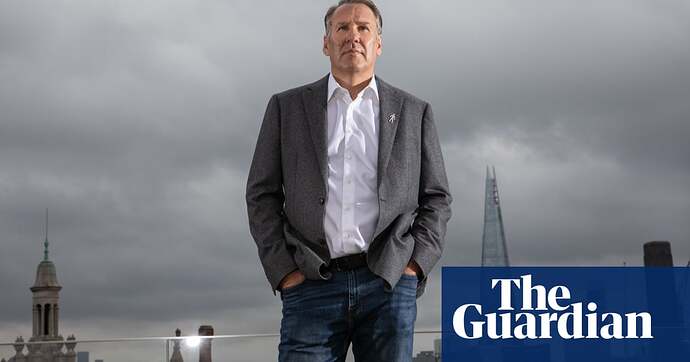 Paul Merson: ‘I was at the Brit Awards and asked Kylie Minogue out. She said no’

The football pundit on his very expensive suit, fighting addiction and why he owes Walsall fans an apology

Exactly. Not been long there was a video posted on here with him slagging our fans off.

The bloke has zero integrity.

Wouldn’t give him the steam from my piss.

Yep. I’ve got no sympathy for him really he’s slagged us off countless times as a club. Which is nothing to do with his issues it’s just him being a massive bellend.

I almost added I do have sympathy regarding his addictions. I have been affected by someone very close to me and alcohol addiction and it isn’t always pretty but that person didn’t ever let it turn him into someone without integrity.

Addiction problems aside
He is a Tnuc

Merson has a lot to answer for. I do not blame him for his addictions, but nobody forced him to become Walsall manager at a time when he knew his addictions were out of control. He could have carried on as a well paid player in the squad without taking on the burden of management.

But Bonser deserves most of the blame. He appointed Merson as temporary Walsall manager at a really crucial time in the club’s history, thinking that a drinking alcoholic with an out-of-control gambling addiction would be the ideal person to get the four points from four matches needed to ensure our safety.

Everyone saw how terrible he was at the job when thanks to Merson’s appalling management we were relegated from the second level, and then Bonser appointed him as permanent manager, and kept him the job long after it was obvious that he was in no fit state to do it.

Everyone saw how terrible he was at the job when thanks to Merson’s appalling management we were relegated from the second level,

I was impressed (to my surprise) with the game plan at Palace and but for a dive and a terrible refereeing decision we would have emerged with a deserved point.
His management in 04-05 and 05-06 was dreadful, but he nearly kept us up in 03-04 and could have done but for that huge injustice.
I don’t like him but don’t think he deserves the blame for being relegated after his four matches in charge. It was always going to be hard after that shocker of an afternoon at Gillingham.

Should never have been given the job.

It was bad for him and bad for the club. Completely a case of the wrong person, in the wrong place at the wrong time.

I think it was an ego appointment for both him and the chairman at the time. I also believe the latter saw business opportunities (VSA in particular) through exploiting Merson’s name and image.

Merson is damaged. I think his job at Sky is his life belt without which he’d go under - hence his continuation there when his peers have all gone.

My biggest problem is that this emerging humility around his time as our manager has been preceded by a whole host of digs at both the club and fans. Inferences that us as fans don’t really understand the game to get a few giggles at after dinners and on the telly are below the belt. Presenting us as football hicks if you will.

I genuinely wish Paul Merson well and hope that he can continue looking after himself and also continue to re-write his own narrative around his time as manager of our football club.

I posted this on the former player thread. Anyone going? 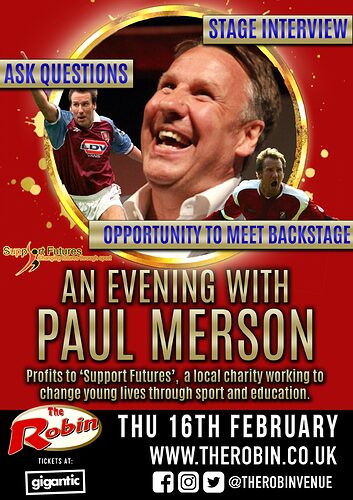 An Evening with Paul Merson

Do they search you as you go in?

If Merson managed to get us just one goal away from survival, I’d like to think an actualy compotent manager would have kept us up, but who knows.

Crazy to think it’s almost 20 years since that happened! As a 15 year old at the time I was confident we’d be back in the Championship after a year or two

Spent the last decade making jokes about the club who gave him a big chance when many wouldn’t.

Merson cares about nobody except himself.

Yep even on the TV everything has to be about him. His gambling, his drinking , his weight etc etc…. Bore off

Very difficult for an addict to deal with their additions but the one thing that is for sure is they never will while they continue to blame others for their own failings.