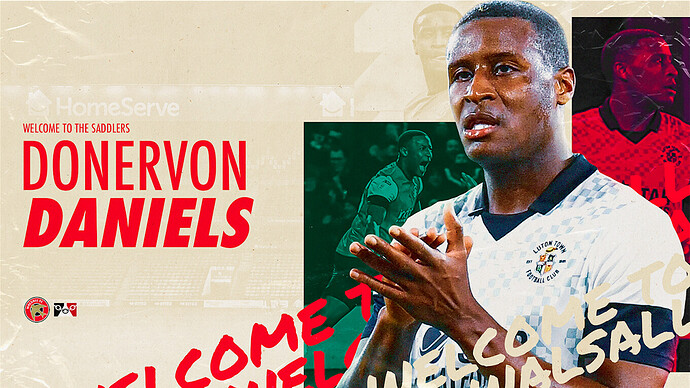 Walsall Football Club are delighted to announce the signing of defender Donervon Daniels on a permanent contract until the end of the season.

Decent signing that is

I assume that this is up to date

Can he play Tuesday?

About time - looks to have decent pedigree

Does anyone know if he is predominantly right or left sided?

Important that this is permanent as we still have 1 loan left.

He’s a CB who can also play RB I believe.

Crewe fans seem happy to see the back of him… Seems a bit like us and Ash Taylor.

At least he is a defender!
What happened to the much vaulted signing of Rodney? Perhaps he don’t like pork Scratchings? Wimp!

Crewe fans seem happy to see the back of him…

He’s always been decent when he’s played against us. Seem to remember he was part of the Wigan team that pipped us to promotion in 15/16?

News just in, we’ve agreed to mutually terminate his contract so that he can join Kidderminster Harriers

Seems OK, probably as good as we are going to get at short notice.

Contract up at the end of the season with Crewe so, I assume, we’ve taken it over and given him the opportunity to put himself in the shop window and earn himself a longer contract.

Not sure he’d have been on our shopping list had it not been for Menayese’s suspension.

Would have preferred a Zak Jules or a Max Melbourne who could play either centre back or left back.
Still beggars can’t be choosers.

he also has Covid19

Great to get a defender in, but signing him permanently on a 5-6 month deal is embarrassing. It’s effectively a 6 month loan, where he’ll be off to a higher club than us if he performs well.

We are shite. That said, hope the lad does well whilst he’s here.

I assume, we’ve taken it over and given him the opportunity to put himself in the shop window and earn himself a longer contract.

Yes, that worked a treat with Kahn😀.