Its always goto be but why do football fans get such harsh treatment?

these two clips point out what i mean…

Get this shared about #barnsleyfc #swfc, @syptweet absolute disgrace!! Lad doesn’t look older than 16 and been smashed around head by an officer 🤯 https://t.co/V5SaRm7pCN 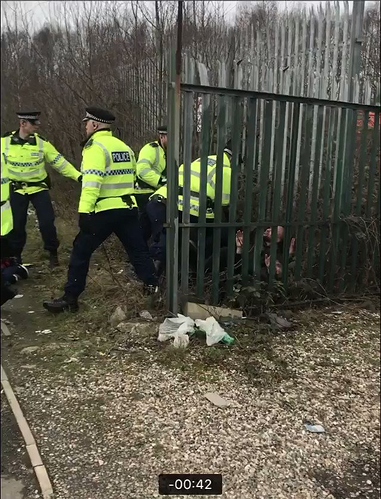 Thankfully the Walsall police at our games are brilliant. There is a mutual respect and that goes a long way to stop any trouble starting. A lot of forces could come to see and learn from what our lot do.

Lad acts tough, tried to bang but got banged, mummys little angel is hurt and crying, no sympathy here.

Coppers reation was probably one of those rash decisions he will regret for the rest of his career.

Are you serious? This is what South Yorks police have been doing to folks since 1984. They’ll never change. Biggest hooligan firm in Yorkshire is South Yorks (not so) finest, and inbetween times managed to precide over Hillsborough. Young kid getting his head bashed in, its GBH at best, and if it was the other way around you’d be looking at a MINIMUM 5 stretch. If that was fan against fan you might even have a case for attempted murder.

Police can’t bash someone in the head unless they fear for their safety. He runs 20 yards and thumps a kid on the head.

He took the easy target. Absolute weapon. Wasn’t like it was a big group of lads was it? Took it upon himself. He will regret it I doubt he’s gonna come out of that with his job.

Also the lad at Preston was let go and not charged. “Oh sorry two of us pinned you down and thumped you a bit”. Not good enough. They manufacture this nonsense to justify them being there. Police at football are draconian. They target the soft lads doing bugger all let the others go and knock on their door in 6 months with two vans full.

It says a lot there are now several lawyers and solicitors offering services via charities for this kind of nonsense.

I went to visit my bro at uni in Sheffield one weekend years ago. United and Wednesday were both away and trains due to come back about the same time.

It was like something out the movies, coppers were being absolute ■■■■■ and the only trouble was from them. SYP have been at it for years. They love a scrap. All dressed up like robo cop these days and then wonder why people feel on edge

Are you REALLY saying what that copper did is acceptable

I got thrown out at Rotherham once in the Hibbitt era, Tuesday night game, absolutely awful game. Walsall fans were messing about in the toilet block as the lights were out so I had my one round the back where the small stand was. Two coppers up the top, one shouted “eh lad If my missus had seen that i’d be doon theyer fort give ya a rite kickin” To which I replied “I’m sure it’s your missus getting shagged in the bogs mate, she mentioned her husband was a copper on overtime”.
What a scrap ensued in the alley ouside the ground where they didn’t realise there were 5 Walsall lads that already been kicked out trying to get back in over the wall, best I can say was we gave as good as we got and non of us got lifted…somehow!"

No absolutely not but we do not know what went on before the video started.

But the whole ‘hes an innocent 16 yr old kid’ im reading on twitter is BS. He’s an hooligan and a thug.

As as you said you didnt know the situation too judge so can you judge hes a hooligan so quick?

Hes was 18 and with his mother? His mother had too watch her son getting clapped round the head…

Dont care how you put it its bang out of order and sums up ill feelings towards some police. One rule for one and one rule for them

Hooligan or thug no matter if he was .That is not a death sentence .which that copper with that force on the head could have done to him.

Police are not supposed to batton folks heads in, in any situation. they are supposedly trained (and paid) using our tax payer’s money to deal with situations. Doesn’t matter “what went before” police are there to deal with situations in the interests of public safety and make arrests if the law’s been broken, not act as judge, jury, and executioner. I’m amazed anyone can defend this thug’s actions.

It really is time that the different approach to policing football fans and indeed all the extra laws and bye-laws that are specifically there for football fans were reviewed and many removed.

The drinking laws as they relate to football are a joke. Not being able to see the grass whilst having a pint is bizarre.

Some (but thankfully not all) police forces still see football fans as fair game and this incident exemplifies that attitude. That’s what, a fifteen year old kid, having a bit of a playground scuffle. Something and nothing. And he gets his head bost open. It just wouldn’t happen in any context other than football. The NHS couldn’t cope with the Friday and Saturday night demand if it did with queues of baton cracked heads requiring a dozen stitches and indeed worse after the usual weekend aggravations. Playgrounds would be a blood bath!

One of the key attributes of mature and fair societies is that it they have laws and a judicial system whereby all citizens are equal before them. That doesn’t apply to us in this country.

Your instantly at suspicion of criminal activity if you go to see your team at an away game. It’s fact.

If you go see a band in another city is it the same? Nope.

Certain policing bodies at the football still thinks it’s 1988. They should be held to account.

Also if you commit an offence in any relation to a football match your punishment is over zealous and quite frankly ridiculous.

Police are trained to use necessary force as long as they believe lawful and accountable…Head strikes are most definately allowed but only in the most severest of circumstances where there is a danger to life. With that most shortish of videos it certainly does not appear to be the latter. With an almost zealous approach to persecuting police officers today i will be surprised if this officer remains in the job. I would easily sleep using a baton if absolutely necessary however i would have nightmares with that video.

That’s an interesting response. Can you give some examples of the “almost zealous approach to persecuting police officers” to give some balance to the discussion? Because I’m unaware of any. What I am aware of when it comes to South Yorks police from 1984 and the miners strike onwards, are many many examples like this recent one from last weekend where they meter out completely unjustified attacks on members of the public, risking severe injury and possibly even death as could have been the case with this child. Add to that the abbhorrent fact that they presided over the Hillsborough disaster, and the blatant cover up that followed, and failed to notice that 1400 children were being systematically abused in Rotherham, a situation facilitated (according to the enquiry) by a culture of contempt towards the largely “working class” victims. I can see very much a “cause and effect” between the attitudes that pervade members of a police force that for decades has shown itself to be unfit for purpose, and the consequences that members of the public have suffered, and it would appear continue to suffer looking at the footage from last weekend. We’ll see what the enquiry into this officer’s behaviour comes out with in due course.

For various reasons I was at the Barnsley v Wednesday game. Police were bloody useless at crowd management after the game. They could easily have set up different walking routes to the station/town centre for both sets of fans but ended up parading thousands of Barnsley fans right next to the wednesday lot waiting for a train. That ended in abuse hurling, police getting shirty and possibly more (I moved out the way but it was escalating). South yorkshire police, 30 years later and still not a clue.

A very interesting response.My ex collar number at the end of my name gives it away!!..Hillsborough. Miners… Rotherham all conducted by high up dumb ■■■■■. the latter with complicit help from other agencies due to not wanting to upset this section of society. Read my post again. i will be surprised if he keeps his job as i know there is a witch hunt to prosecute… Notwithstanding he deserves it looking at that bit of evidence.

OK fair enough, you won’t find anyone that will agree more than me that agencies of the government are run by individuals complicit in policy that makes them look dumb although I don’t think they are, their crimes against the public are intentional not accidental, as is the failure to make them accountable for their actions. You havn’t given any examples to illustrate your argument regarding the persecution/prosecution of police officers, but clearly this is something you feel strongly exists. Personally I feel there are very many sections of society that are far more vehemently persecuted than the police, football fans attending games being one of the most obvious as is demonstrated amply by this footage. Where I do agree in essence with where you’re coming from is that police on the ground v public on the streets is an example of the “rats in a box” conflict that our beloved powers that be love nothing more than. However, as individuals, and maybe especially individuals that “wear a badge and gate-keep” we all have a responsibility and a choice when it comes to right and wrong, that isn’t something to be gotten from taking orders (good or bad), its just something you need to stand up and do because you’re a human being, a member of society, just like the ones around you.