Proud To Be A Saddler 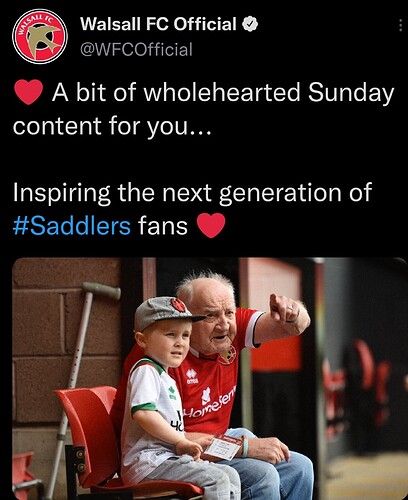 WHAT A POWERFUL IMAGE !!!

For me this is what supporting your local team is all about spending quality time with family and friends and making memories that will last a lifetime.

It’s so hard nowadays to attract young family members to support there local teams when all you see is the big Premier league teams plastered all over telly In papers on social media.

I take him to Saturday club before a game on the 4g pitch and there is probably 40 or so kids that go my son and maybe one or two more were wearing walsall tops, loads of man utd Chelsea Liverpool spurs man city etc.

It’s shame really because many of them won’t step foot in any of there premier league teams stadiums, but would rather watch Chelsea play Southampton on TV at 3pm on a Saturday, rather than go and cheer on there local team at the ground.

Sadly my dad wasn’t into football so we never had that Walsall FC bond that I see so many people have with their kids/dad’s.

I have however made hundreds of friends by being a Saddler and that’s what’s great about supporting your home town team.

I hope that the young lad in the picture had a great day yesterday.

Cherished memories for both.

Saw this on FB yesterday. A lady commented saying it was her son who was 3 with his great grandad who has been attending games for over 80 years.

On the UTS Facebook page, captioned ‘150 games for the Saddlers has really aged Liam Kinsella’

“Look. I know it’s hard to believe, but that’s the end of the queue over there”.

What a great image!

Fabulous image. That little lad has no idea how much pain he has ahead of him as a Saddler. He’ll love it!

Credit to the Grandad for wearing a replica shirt.

Ah, so that’s where the Mansfield centre half left his stick

Superb gesture by the club.

You still can’t watch live soccer at 3pm on a Saturday - and long may that continue.