We have several ex Walsall players as current coaches/managers at the top end of the pyramid who could help the club out with temporary loan signings in January.

I’m sure that we could call in favours from Wilder, Viveash, Robins, Dean Smith, Dean Holden, etc…

I know that we are competing with clubs with higher budgets but what’s new?

When Clarke was doing well at Bristol, he had a goal machine in Matty Taylor (what might have been if he’d have managed to persuade him to choose us over Oxford last season) but he has always favoured a big man in the mould of Clarke-Harris (now at Posh) up top to play off (hence the signing of Adebayo).

I know the name has been brought up a million times before but surely Leon Clarke would appreciate a bit of game time. Assuming that he is not injured, a decent striker /focal point with a bit of proven experience would transform our group of journeymen into a functioning machine.

What are the thoughts of other fans to a potential solution to the current malaise drifting over our beloved club?

My wish would be for Pomlett to read the riot act to Clarke and tell him, in effect, “you’ve signed enough players, you are getting no more, work with what you have, most of them were your choice so make it work, and STOP FANNYING AROUND EVERY BASTARD WEEK and just pick a settled team and formation from the players you signed”.

This style of Management drives me up the wall. Keep it simple Darrell.

Agree we should be able to call on some of our ex players to help out , but they maybe worried about putting some of their players in the frying pan at the moment .

Have always been amazed at the number of players sent out on loans from our bigger neighbours to other clubs rather than to us on their doorsteps.

What are the thoughts of other fans to a potential solution to the current malaise drifting over our beloved club?

Think most obvious answer is a change of manager

If we’re talking players though, we miss a bit of creativity, someone who will run at defenders, get a shot away, simple stuff that would just liven everyone up so it wouldn’t seem like such a chore to get the ball into the back of the net.

I know he isn’t everyones cup of tea but I said it in the summer that I wanted us to get Harry McKirdy, he’s at Vale now but a player similar to that really could have been the difference.

Always wonder if we’re still considered a safe pair of hands following the relegation season, where we loaned a lot of youngsters from local clubs.

Imagine Johnson and Ronan won’t have reported back to the Wolves staff with high praise following their stay, nor Fitzwater and Wilson at Albion, nor Blackett-Taylor at Villa.

The fall-out from that basket-case season and the toxic atmosphere in that squad continues.

The fallout from that one season will still be killing us for the next decade.

I know the name has been brought up a million times before but surely Leon Clarke would appreciate a bit of game time. Assuming that he is not injured, a decent striker /focal point with a bit of proven experience would transform our group of journeymen into a functioning machine.

And that’s the problem with Leon Clarke. The Slops may well be OK loaning him to us but there would be zero benevolence on the wage. I think we’ve stopped hiring folks who want paying for the time being which is fair enough given we’ve been handing out the P45s to staff.

To spend another pound we need to bring in a pound. This would require us loaning out some players before we loaned one back in unless it were like Scrimshaw and George where the parent club are picking up the tab.

That’s not me buying into Darrell’s budget whine by the way. I reckon his budget coupled with the summer stability others could only dream of should see us doing a lot lot better. His problem is really that I’m guessing four of his top earners aren’t playing much right now which in part is down to him wanting “characters” on the training pitch at the cost of bodies on the match day pitch. Which is bonkers for a club at our level in these circumstances.

In terms of solutions, if they are as close as they appear to be an honest Clarke, Guthrie, Sinclair, Clarke chat about current contribution vs wage and the words “free agent” should be had. Two of those off the books would enable some wiggle room to get a right sided player to allow Holden to move inside and maybe another body somewhere down the spine.

Already been said that we aren’t making any signings in January, but I guess that could change if fans can go back and we start getting the revenue back in or if we can get some more free loans.

For me, we should be after a right winger more than anything as creativity has been non existent in the past few weeks.

Like what @jjunior9 has put above regarding Matty Taylor, could we not tempt someone like Billy Bodin?

Clarke knows him very well from his time at Bristol, he’s not getting in the Preston squad and a quick search suggests Preston are looking to loan him out in January with him also being out of contract in the summer. 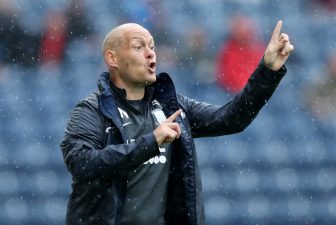 Preston North End are sitting in mid-table in the Championship after 11 games, with their results on the road far superior to what they’re achieving at Deepdale. The Lilywhites are suffering with some injury problems though, with Ben Pearson and Ben...

Let’s get on the blower To them now

Yeah, club have said that if we are able to get fans back or if PL pay something down it may change but as it stands there are no funds for January.

pressure on dean smith to loan us louie barry for the rest of the season , check him out

Louie Mark Barry (born 21 June 2003) is an English professional footballer who plays as a striker and winger for Aston Villa . Having spent a decade in the West Bromwich Albion Academy he moved to Barcelona in 2019 and subsequently joined Aston Villa in January 2020. Barry has represented England at youth international level.

From Barcelona to Beechdale

Went to the same school as my son

More like from the New Camp to the Bezla Holiday Camp

I would be open to the Barry loan but very surprised to see Ryan Colclough rocking up at Altrincham today. Misdemeanours aside, he is a proven right sided player at a good age. My view is that he would instantly improve our squad and would probably start in our first eleven…

If Dr Who come in the time machine and you was offered alan buckley now for the next 8 seasons 174 goals in exchange to erase the past goals and memories he created , like he never ever played , but you get them goals now for 8 years ??

OH and my personal grudge with football , the bosman ruling - get rid , its been crap for smaller clubs . unfair rule

Can you throw in Super George and Bernie The Bolt too?