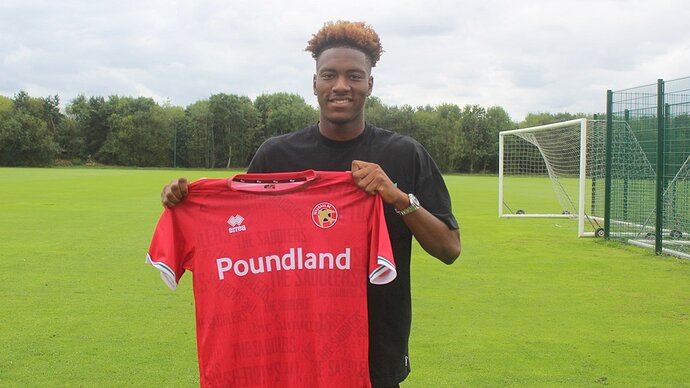 Walsall Football Club are delighted to announce the signing of Timmy Abraham on a one-year contract.

“I’m very happy to be able to come here and play for this team and put this shirt on.

One year deal. Not surprising.

Another option happy enough with him signing

Good signing, still young with potential.
As Flynn said hes worked hard and tried in pre season.Offers something different with his pace
Welcome on board Timmy

Good option off the bench, a chance to develop and learn from Williams and DJ.
Also maybe more productive away from home as teams push on to us more giving him the space to run into.
Thumbs up from me

Happy with that. I wonder if the contract comes with a further option?

Feel somewhat different about this almost inevitable signing today than I would have done last week.

Had this happened this time last week, I wouldn’t have been so comfortable as I would have suspected he’d be leading the line for us.

Now with DJ in the building, slightly happier as another option that adds pace which we lack with Johnson and Williams. A project for Flynn over the next 12 months. Interesting to see how he does.

From what I’ve seen of him during pre-season, he might be more of a goal maker than a main goal scorer (which is actually what we need - someone feeding Williams and Johnson). You can have the best striker in the world up top - but if they don’t see much of the ball they’re not going to be scoring many goals.

No prizes for guessing what the first question is

Like they are going to say ‘Not happy at all, this is the last place I want to be but had no other offers’

Happy with this. Good sub option.

Anyone else expecting a picture of a abraham sign

Also when Wilkinson is back a front three of Wilkinson and Timmy wide and either DJ or Williams down the centre will cause problems in this league.

Hmm, if his name wasn’t Abraham I don’t think he gets this opportunity but hey ho, inevitable signing so lets hope he shows more in a Walsall shirt than he has done to this point in his career.

Happy with this, he will come good at some point and he will be ours!!

Good luck to him. Has a lot of potential. Hopefully this season is a wake up call and provides huge motivation as he must’ve been very close to dropping to non-league if his trials didn’t go as well.

Welcome and good luck. One year deal with some clauses I suppose, looks right.

You really think Flynn signed him because his names Abraham

Showed nothing as a striker in 3 friendlies but against Cov out wide caused massive problems. So as an impact sub or to come on with a change in system it’s a decent signing

Not what I said. I don’t think he gets the trial or the chance to train with us, or probably even a shot in the professional game without his genetics and being really similar to his brother.

Hope his record improves though because to this point, it’s terrible.

You literally did though