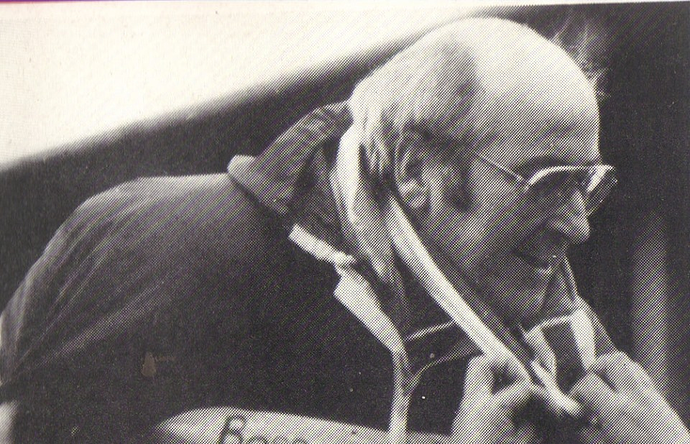 Tommy Coakley was born in Bellshill in 1947. Following spells as a player with Motherwell, Arsenal, Detroit Cougars, Morton and Chelmsford City, he started out in management with Malden Town and Bishops Stortford before taking over at Walsall in 1986...

I’d long assumed he had to sell Cross because of the financial position, but no. His decision, and he had to insist. I believe him. There’d be absolutely no reason to lie after all this time .

I was at that Bournemouth game ,and remember their reaction at the end. Second half was probably the best I saw them play that season. Bloody mean sacking his son and daughter. Wouldn’t have got away with that today.

Yes I attended the Tommy Coakley evening at the Saddlers club about 6 years ago and he mentioned then as to why he sold Nicky Cross. Tom did mention to me a couple of times that he still feels that he and his players didn’t get the praise they deserved for that promotion and said even now more is said about what happened in 99 and 01 than 88.

Especially when you think that we were already in trouble by then, after Ramsden got hammered on Black Monday. On deadline day, while others were splashing the cash, we signed a winger on a free who was surplus to requirements at…Newport. Saunderson?

another cracking interview Dave
After speaking with tommy last week can’t wait to get him down railway to meet the fans again,

Paul Sanderson was the lad I think. Only made a handful of starts.

Cheers mate. Yes it was fascinating hearing his views on what was going on down there behind the scenes. A lot of interference going on with certain people challenging him.

I have it on good authority from a local source here in Cheshire that he is STILL pulling the strings in the background at Bescot on behalf of our holy No.1 fan!

Whalley stepped back sometime ago , Bonser more recently but both still manipulating behind the scenes

The two and a bit Coakley seasons were my most prolific in terms of attendance. Probably only missed four games in total.

I loved those years and will never diminish them in the way Tommy suggests they are. Tommy’s achievements probably rank alongside Sir Ray’s second promotion but quite rightly not in the same league as Sir Ray’s first. This is because in the first Ramsden season Tommy spent and spent quite big. I remember Gerry Francis bemoaning our spending power after we thrashed his Bristol Rovers team.

But what a couple of seasons. The first where after that slow start we were so free scoring it was an absolute joy. I’m sure Christie, Cross, Kelly and Shakespeare all bagged over twenty goals in that first season. It was immense. The Watford games were a joy.

The second season we were a bit more circumspect. As in most successful Walsall sides a hugely undervalued central midfielder in Mark Goodwin in my opinion was the difference and we went up on that glorious May afternoon.

You kind of felt the writing was on the wall for the following season when we sold Kelly and we knew Ramsden was a bosted flush.

Great couple of seasons and I loved every minute of them.

The sad thing in Tommy’s interview is the already malevolent presence of Bonser and Whalley running the show some three years before Bonser “saved” us and in doing so secured a multi million pound nest egg. Our number one supporter who despite being a director couldn’t be arsed to travel to games.

Tommy was gone by that Oxford game. He’d lost the team. The injury to Alex Taylor was a crucial blow early in that season. He looked a fine signing but everything around him still looked distinctly 3rd division.

But great days under Coakley. The treatment of his family a shocking tale.

Even more evidence that until last year we have had a bunch of ■■■■■ running the club for well over 30 years glad we are finally rid of them and hopefully in years to come the legacy they created.

I find it very sad that Tommy feels he wasn’t appreciated. As someone who had moved away and didn’t share in the Graydon era his seasons are up there with the Bill Moore and Alan Buckley years. For excitement the Watford 4-4 and the Bristol City 4-0 are up there with the Buckley league cup win at Arsenal which tends to be overshadowed by the draw at Liverpool but not by the 1000 or so Saddlers who were there. Plus the Coakley promotion season ran alongside the Centenary celebrations. I was at a QandA evening in the old Saddlers club when somebody had a go at him for his apparent lack of local signings. He was quite shaken by this so I said as long as he found players like Graeme Forbes he could sign who he liked. It should also be remembered that it was in his time that David Kelly really blossomed after being a bit in and out under Buckley. Always thought the Buck was a bit jealous of David . Anyway Tommy will always be up there when reflect on my best times as a Saddler.

Not so much the jealousy point but I agree on Buckley and Kelly.

Buckley just didn’t seem to fancy him for some reason. Kelly turned 18 during the Milk Cup semi final season. Scored 3 goals in half a dozen appearances and looked fantastic . With Ally Brown tiring we went Dave Bamber at the end of that season and then the season after signed Steve Elliot as part of the Preece deal with Kelly often forced to take a seat on the bench. Lots of us couldn’t get it. It was only when Coakley arrived that Kelly was properly given his head.

Perhaps jealous was not the right word but as you say he only seemed to turn to him when out of other options.

My recollection of that time is slightly different - not quite so rose tinted.

To me, Buckley was breaking the young Ned in gently and he actually got quite a bit of game time building up quite a reputation as a super-sub, leading to fans demanding he be given starts - but whenever he did it tended to fall a bit flat (probably due to his age) so Buckley would put him back on the bench and dip-feed him again. But he was improving and getting more game time - and on the eve of the 1986/7 season when Buckley got given the chop by Ramsden to bring Coakley in (which most fans disagreed with at the time) there was a general expectation that it would be Kelly’s breakthrough year anyway.

My own feeling at the time, and also the consensus I picked up from talking to other fans, was that even though Coakley brought in a few of his own players to add to the mix (e.g. Forbes, Dornan, Alex Taylor), he mostly benefitted from inheriting the team that Buckley had built which we all expected to do even better than the 6th place reached in his last season.

I mentioned in another thread that I have a video of the Central Weekend Live episode when Coakley appeared with a group of Saddlers fans in the middle of the record sequence of defeats. He claimed to be Walsall’s most successful manager - by the howls of derision this invoked I don’t think the fans in the studio agreed, and they represented the views of most of us on the terraces at the time.

And I don’t buy the Nicky Cross story one bit. Just before the Peterborough game Coakley cites, he substituted Cross after he had scored a hat-trick against Rotherham - a game to which Nicky had brought his young son who he was dedicating the goals to. This wasn’t a “come off early to get a round of applause” substitution and Cross was visible upset by it and stormed straight off down the tunnel with a dark look on his face. It was absolutely no surprise to anyone who saw that to hear he was leaving just a few days later.

You’ve got to give Coakley credit that we did manage to get up (regardless of whose squad it was) but don’t forget that after leaving us he ended up managing just Blakenall before dropping out of football completely - so doesn’t look like the rest of football viewed his “achievement” with that much appreciation either.

To me, Buckley was breaking the young Ned in gently

I can see both sides of this argument, but I think you make a good point. When Ned made his debut back in 83-84, I think most of us could see he was a bit good. We could also see that physically he wasn’t exactly robust. So I think Buck was gentle with him, rather than just throwing him in to what could be a very physical division.
In 85-86 he tended to play third fiddle to Nicky Cross (21 League goals) and Steve Elliot (16 League goals) so he wasn’t being left out for duffers.
The following season he got his chance and scored 23 league goals from 42 starts.

With hindsight you could argue Buckley kept him waiting too long, or that Kellys subsequent career proved what a good job he did with him. In his 35th year, Kelly scored in a Cup Final at Wembley, so things worked out OK.

Taylor was later- after promotion, but to Forbes add Christie, Goodwin and Barber. Basically a completely new spine, the same place Buckley’s teams were vulnerable. So not really that surprising they took a while getting going, then get promoted. And not really an inherited team.