What about all the sub-standard players he wasted his original budget on? I don’t think I’d have trusted him to reinvest the Adebayo cash either.

I’ll never understand why Pomlett sold those players at the end of January and didn’t replace them, but Darrell Clarke was “cut off at the knees” for 14 days of his year and a half spell. It wasn’t exactly rosy before that.

It’s revisionism and a convenient excuse for him jumping the ship he helped brake.

Bonsoir did the same with Fox and Dann. LP may have had a reason and it may have been the same protaganist wanting his rent cheque

Indeed. Shit standard to be living up to. The rent cheque was there when he was handing out “top 10 budgets” too though.

Pomlett may have decided not to give him more money to waste.

As a Walsall manager you have to expect your best players to be sold, it’s part of the job remit. The perceived exception to this rule is when the sale of a player(s), in the winter window, will harm either a established or potential promotion push. In that respect the club failed to back Richard Money (as mentioned above) in January 2008, but backed Dean Smith in January 2015.

Both Money and Smith had us in a position to get back into the Championship, Clarke never had us anywhere higher than the outskirts of the League 2 play-offs. The idea that he had the rug pulled from beneath him doesn’t really ring true.

As a Walsall manager you have to expect your best players to be sold, it’s part of the job remit.

Absolutely. Or any league two club for that matter.

The caveat I would afford Clarke is that you would expect those players to be replaced to the value, or slightly below, what was received, even if only in wage bill.

However Clarke managed one football match with that side. It’s not the reason fans were disgruntled with him. It’s all historically logged on this site, some people had had enough of Clarke as early as 6 months in and his rubbish decisions whilst at this club.

Clarke complained that he was resorting to using young players such as Bates but that was mainly down to the dross he signed in the first place. In his first transfer window he signed Sinclair, Guthrie and Liddle, two of which I imagine were amongst our highest earners. I had some sympathy with him but Adebayo’s contract was due up so it was either money now or nothing (possibly some compo but unknown quantity) at the end of the season (finances greatly needed due to pandemic situation) and Jules left but he hardly played him anyway from memory until absolutely neccessary. But his comments about having to resort to playing the youngsters were down to him.

he signed Sinclair, Guthrie and Liddle

And Rory Gaffney after a terrible start, who we must have been paying wages for at his level from a rival.

As awful as Liddle was maybe we played him in the wrong position. Centre back for Hartlepool and the fans love him

Let’s get one thing straight Darrell signed some absolute tripe I can’t actually believe folk have such short memories and let’s not forget his constant getting the tactics wrong after having a week to prepare for games which he’s still doing by the looks of it! Then there’s his after match speeches he’s a liability and one I’m glad we don’t have to carry.He’s getting help at vale just look at the team meeting they had on the touch line during the game it was his assistant doing all the talking while Darrell stood behind him and I’d put money on that’s what’s happening on the training pitch I’m over the moon we have Matt in charge now he’s so much more professional and measured in his responses as for DC he can carry on with Vale now I just wanted one last go at the Jerk and I am allowed to have it from now on I’m focusing on my team and our young hungry manager.

Quite possible. Question for the manager at the time.

We didn’t Clarke did !

Look Gensanx, I know your sulking about us winning at Vale so you didn’t have the chance to spam post why Taylor, Kiernan, Pomlett, Sadler are all terrible, rubbish etc and we shouldn’t have lost Clarke etc… honestly I do feel for you.

But this Liddle rabbit hole your digging down too, real barrel scrapping.

Fantastic isn’t it. Never seen a ‘fan’ so happy when we lose.

I think if we finish in the top 10 (or better) that will satisfy the club, staff and the supporters that we’ve made progress. More good summer signings for a promotion push next season.
It maybe a little too much to ask for it to happen this season as we’re too inconsistent, we’ve not won two league games in a row yet this season, we need to string together 4, 5 or 6 winning games to put us in the running. Not impossible, but not likely either.
Marvelous support on a cold Tuesday night when many could have stayed home by the fire with a good brew (or two). They were definitely our 12th man. 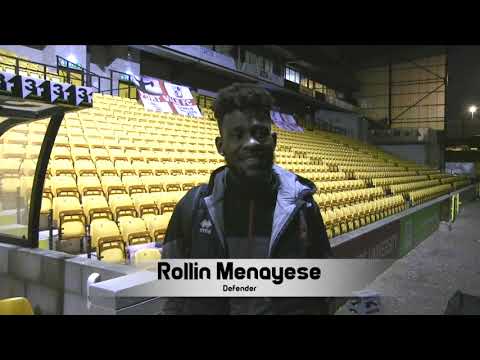 First time I’ve heard this lad speak comes across really well mentions the fans and support he can hear from the stands seems a really nice kid and typifies what Matt was saying with pinpointing the right characters when looking for signings.

He’s one of the best ball playing defenders we’ve had for a very long time. Some of his touches to jink past on rushing strikers are unreal.