Following @Welsh_Saddler s post on the Barrow game , I have discovered the following injustice.

In the 1900-01 season Walsall finished outside the relegation zone, and yet were still relegated.

Even worse the teams below us, Stockport and Burton, weren’t relegated.

I thought Burton beating us to promotion in 2016 was bad enough, but this has killed me.

How can we protest about this? 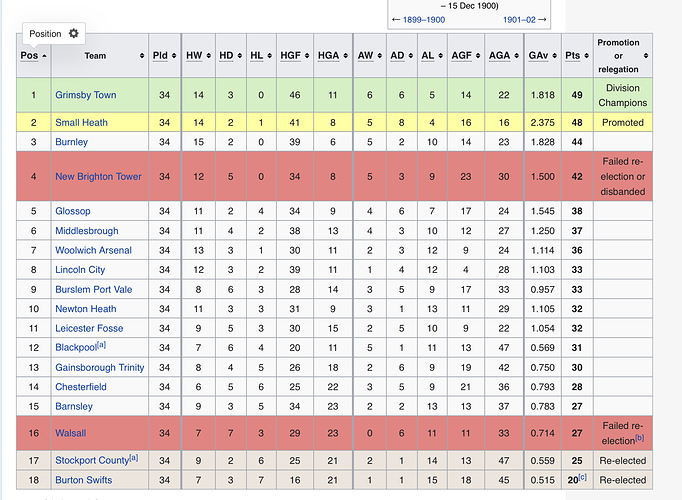 Barnsley just above us too

Start a petition, if we get over 100k signatures the government can discuss it

Ah, but you are assuming there was a “relegation zone”. It appears that all clubs below the promotion place had to apply for re-election back in those days.

I have wrote to my local mp

I’d be raging if I was New Brighton

A further check on my records shows that New Brighton Tower (as they were then) actually resigned from the League, it wasn’t a case of unfair dismissal, as it were!

Correct, Welshie. There was no automatic relegation then. Clubs finishing in low positions had to apply for re-election.

In the 1914-15 season Arsenal finished fifth in the second division. Football finished for the duration, and when it resumed in 1919 they were promoted to division one following a vote by The Football League, although the teams finishing third and fourth were not. It seems there is no end to the injustice and unfairness.

Yes and they haven’t left the top flight since.

To me it is a football scandal that wasn’t matched until MK Dons was formed.

All about money. Arsenal had recently moved from their home in Woolwich (The Woolwich Arsenal) to North of the river to Highbury. They spent a small fortune on the ground and started to attract far bigger crowds than they had in their old home.

Despite the money and the crowds they only finished sixth when it was two that went up. After the war the first division expanded and there was a vote for who should get the second extra place. Arsenal’s owner, a Conservative MP built a case based upon there already being enough northern and midland teams in the top flight carried the day. Never relegated.

The original Franchise club. Which is why our two notable cup successes against them were a victory for everything that is right and just.

Great reminder of a fascinating story.

My mates a Boro fan, it was them that lost out. They’re still really bitter.

According to Wiki, it was Barnsley, Wolves and at a stretch Birmingham that lost out. 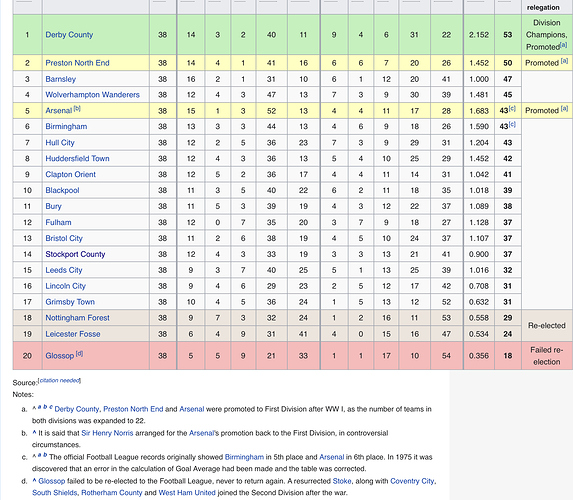 Lying smoggy get. Wait 'til I see him.

Love the small print there. I always had it that they finished 6th which is what the original table said. Changed 60 years later! Brilliant. The Football League - 140 years of absolute competence!

They used an Excel spreadsheet when they did the original calculations.

And a dodgy algorithm

By the way, do we not hold the record for the most applications for re-election to the Football League? Good job there was no relegation in those days.