Well done to all that travel

We are sixth with away support (can’t believe scummy Vale beat us)
Well done to all that travel. 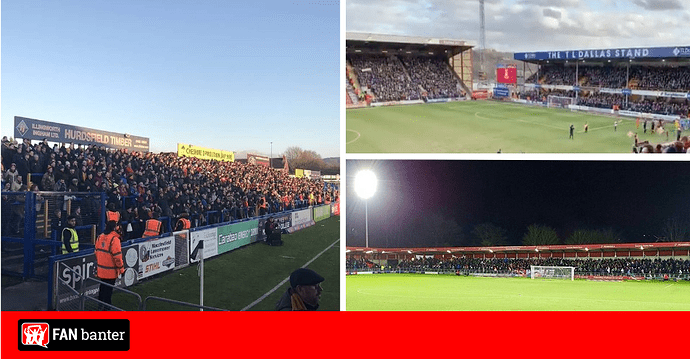 Average away attendance for every League Two club in the 2019/20 season - Fan...

Average away attendance for every League Two club in the 2019/20 season has been revealed with the season currently suspended. A total of 2,057,809 supporters have attended fourth tier matches throughout the campaign so far, and it looked on course...

I see the Bezza was pictured for Northampton

We have always had great away support, it’s such a great day out win or lose

We are bastards for a new ground though and we’ve had a few this/last season.

Just feels now with a new owner everyone just wants to get behind a team to be proud of . Which is why now more than ever we need to support the club in these uncertain times.

I remember going to watch us against Blackpool a couple of years ago with my best mate Kenny Mosedale, we booked into the Big Blue, a lovely hotel next to the pleasure park, we were having lunch and it was hammering down outside, sure enough it was called off
, piss poor ground staff, but we had booked a couple of nights and a night at Viva show, so we just made the best of it, but Ken must have had a pretty hard night before we got there, and it only took him a few drinks to get absolutely legless

, in the end we dragged him out and went to the Chinese restaurant we had booked, but he fell asleep at the table

, we managed to get back to the hotel and his partner Donna said he was protesting that he was going out again as soon as she fell asleep, but as soon as he got in the room he collapsed

Unusual for you to have a story😁

To add to the storey, the lunch we had we were not charged for, and as much money as Ken has, he was over the moon that we had got away with £30

That’s a good average following. Us Walsall fans do always make it a good day out!

Reckon we would have upped that by couple of hundred if season had gone on with Macc and Mansfield well over a 1000 and a run for the play offs.

Not bad at all considering on the whole this season has been a relegation battle.

By my maths, we would have needed about 1400 Saddlers fans to have gone to each of the last 6 away games to get the overall season average up by a couple of hundred (i.e. from 600 to 800).

Given that we have only managed that number at an away game once so far this season (probably could have taken even more to Northampton on the opening day if they’d give us extra tickets but not been that close since), and at best we only have a very outside chance of making the playoffs (even after our mini-revival over the last few games), then don’t think we would have managed to do it.

If we had been challenging from the start then things would likely have been different.

Maths was never my strong point!

Makes me realise what poor away support Bradford City have. About 7 % of their fans travel away, shocking.

Yep Mansfield would’ve been over 1k I reckon (think their away end holds two and a half thousand). Can’t remember the last time Walsall played there.

Also shows how decent the home attendances have been considering nearly half the league dosen’t even take 400 away (although Walsall central location might mean a few of those would take more to the Bescot).

Amazed at Grimsby taking nearly 800 away considering they were having a really poor season until Holloway turned up.

Have a lot of time for those who travel away, especially with an overnight stay.
Great effort. Supporters are coming back because they can see light at the end of the tunnel.

I love away games support always good and loud much better than at home.
Had already booked match tickets for Mansfield .Macclesfield and Stevenage before lock down and coach for all 3 plus Grimsby. looks like no chance of any going ahead.

We are one of the best supported in terms of percentage took too away games. I’ve always thought we were ace for club our size, especially if we have something to shout about.

If you binned London off I’m sure we would do even better.