If they all scored it would never end

10 penos and 6 was missed, by any standard that is terrible. One player or even 2 but not bloody 6!

It’s unprofessional really, I said it last season under Clarke aswell so not good if MT can’t correct this as season goes on.

Only good thing is the two strikers scored and you’d expect them to be taking the penalties in regular games.

It’s poor though to go out when opposition miss 3 of first 5 penalties themselves, Rushworth certainly will be a bit peed off with his mates efforts.

Would also query MT a bit. Stephen Ward is experienced and played at top level for years, he comes on in extra time seemingly to take a penalty…and yet wasn’t in the first 5?!

Odd to me that given the misses beforehand to win it and then Ward rolls it in no problem in sudden death.

Smash it and the keeper saves heroically, fine, put it wide or over, also fine, but it’s tapping it 5 yards either side of the keeper hoping he’ll go the other way that gets me.

Can never understand why more players just don’t slot it down the middle in shootouts. Unless you make it very obvious in run up the keeper is pretty much going to dive either way so always seems a safe choice if you put some height so he dosen’t kick it away with leg.

Would always advise that to a player who isn’t sure or is taking it near the end of the shootout, Kins just closed his eyes, ran up and hoped for the best.

Only 2 missed, rest we saved

I’m with you. I can’t get close to understanding why Ward wasn’t on the fifth pen tonight. It is staggering. Defies any logic.

Only thing I’d say is Osadebe took a few last season and think Kiernan scored a few for Harrogate so them in the five wasn’t an issue despite them not scoring. Ward probably should’ve been bumped up ahead of Earing though and then you have two strikers, two attacking players and senior pro which is usually the best mix.

It’s all about technique and quality, no real surprise that you can tell exactly who’s going to miss the minute they walk forward.

The lads who missed for England in the final

Take the penalty like something rides on it. Take it like it counts. Because when you miss you are full of regret.

Osadebe basically took one of his corners at him

Love Kinsella but absolutely no excuse for belting one over the bar. You have to get it on target, even if it’s shit it stands a chance of going in.

I was always taught that you need to get your body over the ball as you strike it. 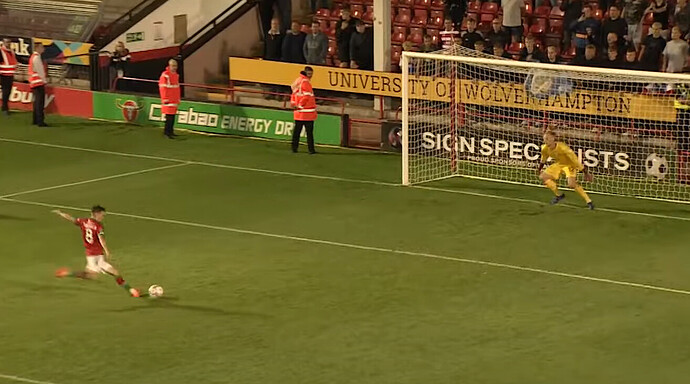 You’ve just got it in for him, haven’t you?!

He should be taking that shot from the right back position.

The pelanties that were scored were pretty good, I thought, for both teams. But some of the others were poor, the misses and some of those that were saved.
Hopefully, if we get one during a match, Wilkinson, Phillips or Ward will take it, and I would be confident of all of them having a good conversion rate.