7th signing incoming and a defender. 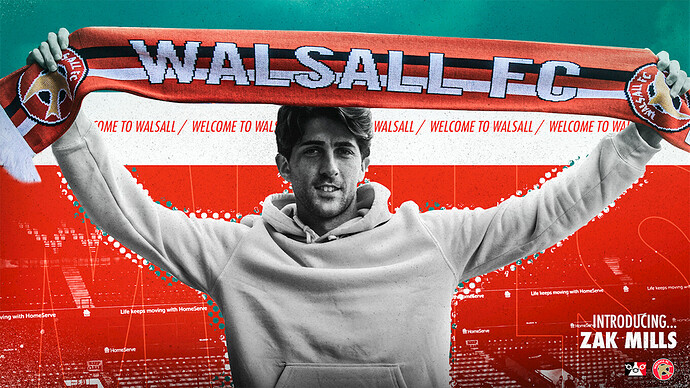 Walsall Football Club are delighted to announce the signing of defender Zak Mills on a one-year contract.

Bit of meh over this. But cover across the back is what we need. I assume a good quality left back is coming to the club soon.

For me it’s then two strikers and a winger.

Isn’t he a right back?

There’s our left back then. Plenty were saying that we need to spend money on the spine of the team and the wider positions were ten-a-penny. Well here you go. Let’s hope he responds well to the team and the coaching. Taylor certainly likes his character.

Seems he can (and has) play “all across the back four”.

First signing I’m dubious about. Going to be a squad player anyway and on a one year deal so I’m willing to look the other way and hope he improves from his spell at Vale where he was terrible. I remember Wes absolutely ripping him apart last season.

Yeah this best be cover, even I thought how **** he was when we played them.

I see this as a versatile utility player that can be on the bench to cover multiple positions if needed. Hopefully this means we can spend a little more on quality

Looks very much a squad filler signing to me. Remember him being dreadful against us last season.

Oh no, I was just asking generally, I don’t know anything about him.

Bit of a puzzler for me though. As I’ve said elsewhere I don’t like the old “can play a number of positions” one because our last manager was fond of players playing here there and everywhere and secondly because Taylor specifically said when he came in he wanted players to know and understand their roles.

As always though, look forward to seeing him play.

I suppose if you don’t include Kinsella as a right back (and I don’t) it makes a little more sense, but Coogan is also right back.

Seen him play vs us. Seen him get burned by other teams on the highlights . Seen reviews before.
He is a poor player. I suppose we can’t sign all proven quality
Hope I’m wrong

Welcome Zac.
Hope you do well.

Reserve judgement til I’ve seen him play in a saddlers shirt… welcome Zak .

Not really impressed if I’m honest… why sign a rb when we have white who can play there and Coogan for back up? Seems strange pomlett saying we will sign 3-4 players yet we have signed 2 since then and still need a LB and LB cover, goalkeeper, striker/strikers and a winger