“But there’s panic on the streets of Carlisle”

Following an unexpected Boxing Day victory, Walsall end the year (and indeed the decade) at home to a Carlisle United side struggling for form.

Carlisle are six points and six places behind the Saddlers in League Two, currently occupying 21st place. The Cumbrians have won once in their past 10 league games with new boss Chris Beech, who replaced Steven Pressley in November, yet to record his first league victory as a manager.

That said, Sunday’s visitors have drawn quite a few games of late (including a 0-0 against 5th placed Bradford on Boxing Day) and also earned an FA Cup 3rd Round tie at Cardiff with victories over Dulwich Hamlet (A) and Forest Green Rovers (following a replay).

Though they’ve scored only once in their past five league outings, Carlisle have a decent creative threat in the form of Harry McKirdy (7 goals, 5 assists), Olufela Olomola (6 goals, 1 assist) and Sheffield United loanee Nathan Thomas (4 goals, 5 assists).

The teams last met at Bescot on December 21st 2013, a 2-0 for the Saddlers that took us within touching distance of the League One play-off places. Romaine Sawyers opened the scoring on 15 minutes before Milan Lalkovic sealed the points with a turn and shot midway through the second half.

Carlisle ended the game with 10 men as Courtney Meppen-Walter was dismissed on 86 minutes, a straight red for a professional foul on Troy Hewitt.

Gary Liddle is the current link, having played 100 games for Carlisle before moving to Walsall in the summer. He wont feature of course, having completed a loan move to Hartlepool last week.

Walsall-born Karl Hawley netted 47 goals in 118 appearances for Carlisle between 2004 and 2007, top-scoring in three consecutive seasons as he helped them to win successive promotions from the Conference to League One. Another Walsall youth product, Matty Fryatt, scored his first league goal during a loan spell at Brunton Park in 2004.

Midfielder Ray Train began his career at Walsall (73 apps, 11 goals) before moving to Carlisle in 1971. He enjoyed five seasons in Cumbria (155 apps, 8 goals) before earning a move to Sunderland. He finished his career with a short stint at Fellows Park in 1987, retiring aged 35.

A special mention to Derek Mountfield, who helped Carlisle beat Walsall to the Third Division title in 1995 before joining the Saddlers the following season. He spent three years at the club as a player and coach, and was in the frame for the managerial vacancy that ultimately went to Sir Ray Graydon.

Other contemporary links I can think of are Zigor Aranalde, Anthony Gerrard, Martin Brittain and Mark Gillespie.

As Darrell Clarke pointed out after the Scunthorpe game, we’d likely be in the higher end of the league if our home form was any good, so this fixture presents (on paper) a great opportunity to win well in front of our own fans and break into the top half of the table.

A very tentative prediction; 2-0 to Walsall. 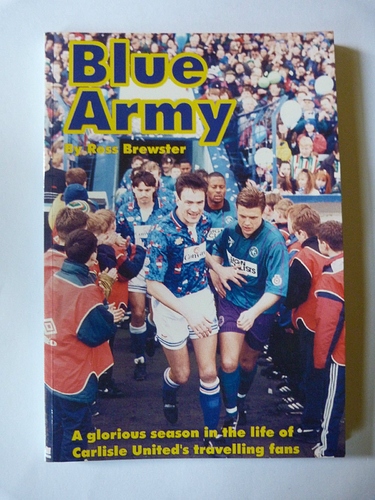 Love this photo of Mountfield and Chris Marsh entering the field at Brunton Park, think we lost this one 2-1 and effectively won Carlisle the 1995 title.

No idea why we didn’t wear red.

Really hope we win this and keep the positivity building again. Could set up an exciting second half of the season if we can win our next two home games which we should be able to. That 2-0 win over Scunthorpe will have given the team so much confidence.
Walsall 2-1 Carlisle United.

Home win is overdue, but I think Carlisle will score. So it’s a 2-1 win for me I hope

Trouble when you read about , this team that team like Carlisle haven’t scored this , haven’t won since such and such , have the worst away record , blah blah blah , they have a tendency to kick us in the balls , but I’ll hold out for a 2-0 Walsall win this time , and the start of a push for the playoffs…hopefully

love a bit of the smiths

Carlisle have the 22nd poorest away record in the division

Is that good or bad…

I honestly think we have turned a corner, 2-0 to the saddlers

I was at that game.
All we kept getting off the woman on the Burger van was “we are going to London soon”.
They had Blues in the Auto Windscreen Final.

It can be tough game. As always, when it is necessity not just possibility. But maybe this time will be different and we can comfortably confirm, we are better, scoring one goal more.

My optimism factor is getting cranked right up and I think we will win. 2-1.

Did Roger Boli get one of his spectaculars against Carlisle? I’m thinking he got the ball near the centre circle, hared towards goal and from the edge of the box lamped a left footer past the keeper at the Away end. I’m sure it was Carlisle, but it was 22 years ago so might be wrong.

Should be a win.

Dean smith could well be sacked after this defeat against 10 man Watford.

Surely that would be a bit hasty?!
They are in a bad run of form though and new manager ‘bounce’ seems to working on other teams (glad to see Mourinho’s appears to be wearing out though!!)

Carlisle 2 goals in their last 6 league games so similar problem to Walsall for much of the season.

Doubt this will be a thriller but 3 points from a home game are really needed.