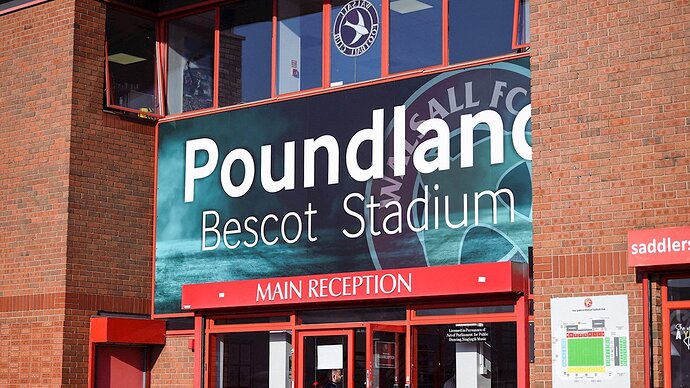 We would like to inform supporters that all cash cards will expire on 1st January 2023.

I’m not sure how kids are expected to be able to buy things.

That is a good point unless they expect them to be with parents who will probably have a credit/debit card.

No idea what these cash cards are but I’d like to use the opportunity to have a pop at Pomlett even though it’s established I have no idea of the situation.

They’ve been in place since the ground went cashless. You top them up at the shop/ticket office so you can use them in other areas of the ground.

No idea what these cash cards are

Cashcards are essentially a pre-paid debit card sold by the club to accommodate people without debit cards to enable the ground to be cashless. You load up the card in the club shop and then use the card at kiosks around the ground. Perfect for children.

The club haven’t said how they will accommodate supporters, such as children, who don’t have debit cards going forward.

I’m not sure how kids are expected to be able to buy things.

I’m all for cashless but I actually hadn’t considered this point. Has this been raised at all? Would be interesting to hear the the clubs response. I used to go alone with my friend to the football from around the age of 13/14 and I’m sure I only had a card that could only be used at a cash machine, you couldn’t actually use the card to pay, so I’d have been screwed.

That’s a lot of cash they could be missing out on though.

Think it’s a great idea for the kids have these top up cards instead of having to walk around with their parents Visa cards in some cases.
Why change it surley they run the risk of losing a lot of money from sales.

My lad had one , great idea , I could leave him at the food kiosk while I went and queued at the bar .Now I can’t do that as I’m not leaving my back card with him .so I’d have to queue for food with him then queue for beer . Or there again not bother as it will take to much time

So if the credit on the cash card isn’t used up in time, do the club return it back to the account the credit was bought from or keep it? Pretty shit if it’s the latter.

Club will keep it - paid for in cash so they don’t have an account to repay it to.

My Dad cannot attend anymore due to the club being cashless.

Cashless and cash cards etc is a brain freeze for him, he has his Building Society book and he’s happy with that.

Many moons ago I had an Allianz Arena Card, which worked on the same principal as the Cash Card at WFC. It worked very well, however it was taken out of service at the end of last season. I assume that the manufacturer / operator of this system is no longer willing to support it. This could be a reason why WFC is phasing it out.
For those who’s kids had a Cash Card & are looking for an alternative, there are some childrens bank accounts out there that offer a visa debit card for kids 11 & older. The TSB has such an account:

Our TSB Under 19s Account is the ideal bank account to help you get clever with your precious cash. Managing your money has never been easier.

Has he/have you written to the club to apprise them of the situation? It might be a good idea if they were made aware that at least some are unhappy.
I can’t understand why they have done it, why not give people a choice of payment options.

Not but an email is a good idea

It’ll get passed on, that’s for sure.