Just got my ticket and I am looking forward to it - not something I was doing in previous seasons.
I’ve gone for a win on the basis that we haven’t conceded yet and they haven’t kept a clean sheet - I mean, statistics never lie do they……….

Looking at the stats from their 3 games so far, they haven’t been sitting back and playing on the break - they have take the games to their opponents and outshot them - so probably more of a Newport type challenge than Pools or Swindle.

I have faith in our defence though. Although Evans has shown himself to be more than competent, he’ll never get into the L2 team-of-the-week as he doesn’t get called upon all that often because our defence is so solid to start with and hasn’t allowed him to face many shots.

At the other end i think we are creative enough to unlock them and create a chance or 2 of our own.

I won’t be there unfortunately, so nailed on win! 3-0 to the New Saddlers!

Less of that this season I hope.

Stevenage’s fixtures thus far this season have been:

Impressive results against better opposition than we have played.
This will be a tough fixture, but MF will have us well prepared.
Expecting a physical encounter, but Clarke, Daniels and Monthe are a match for anyone; we won’t be bullied.

My dad has missed 5 of our 6 goals at home so far. Against Hartlepool he was in his usual ST seat but people in front of him stood up as we attacked and blocked his view (he’s 91 and cant get up and down quickly as his knees are a bit shot). Against Swindon he found an empty seat on the front row and witnessed the penalty but then decided it would then be a good time to nip to the loo while the players were celebrating (dodgy bladder too) and missed our second.

Actually he didn’t see the goal at Newport either. I got the game for him on iFollow and he was watching it with my mom on her tablet (having left his firestick at their caravan as was planning to go back down after the Hartlepool game but didn’t), but apparently her shouting and swearing at the game got on his nerves so he went outside for a bit and missed that one as well.

I’m hoping we can keep the momentum going. Unlike last year, I think we’re going to be tough to beat at home this campaign. We’re stronger, quicker and much more balanced than we’ve been for many years, teams will find us difficult to beat.
I’m looking for two things on Saturday, a win in front of a good (6000+) crowd.

I doubt it will reach that figure. People on holiday and a train strike !!

Stevenage will struggle to bring more than 200. I think it will be slightly less than the Hartlepool game. Att. 5567

We’ll be lucky to get 5k in for this one I think. We had 5.7k for the Hartlepool game being the first game of the season including 450 traveling fans so you can knock a couple hundred off both of those. Would be nice to maintain that 5k+ home crowd though. 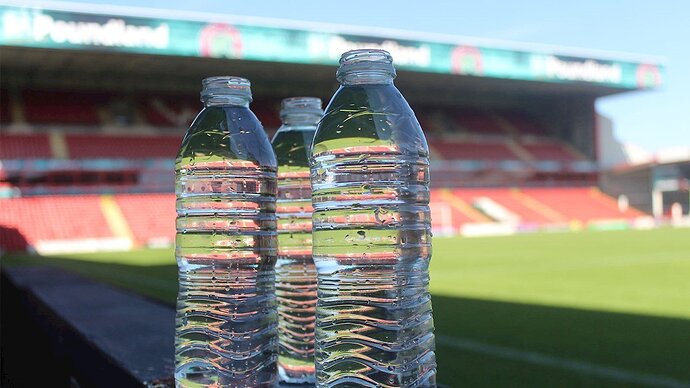 Walsall Football Club are aware that Saturday's game against Stevenage is due to be played in extreme weather conditions with temperatures set to reach 35 degrees.

I reckon around 3,800 tickets sold so far for Saturday. With more tickets pre-sold tomorrow, combined with a few hundred walk-up and around 250 Stevenage, it won’t be far off 5k.

The bottle top rule is a load of rubbish

My mate brings a spare one

This is gonna be a scrap-first goal the winner

Anything over 5k will be a good gate Saturday considering the team were playing and there support. 5177