Looks like Josh has headed up the road a bit further than Burslem, he’s gone to Barrow! 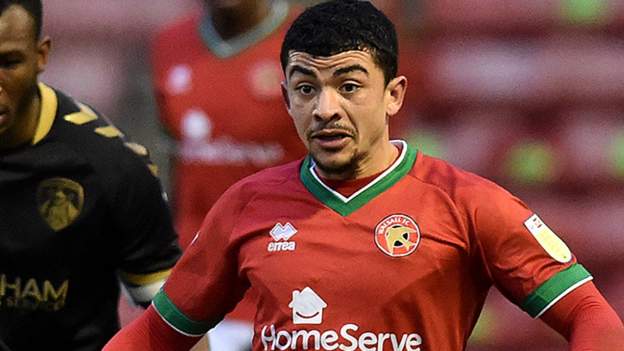 I know he became a bit wack for us but, after his injury which clearly affected him, I hope he does find some form again, as he looked like he could be a decent player when he came to us.

I never really rated him. He had zero composure in front of goal, never seemed to anticipate and be in the right place at the right time and gave too many fouls away. I won’t miss him but I wish him all the best at Barrow.

He was never that good really, just thought he wasn’t an ■■■■■■■■ like most of the squad that got relegated so was given more of a chance by the fans. Nice enough bloke, I’m not going to say I hope he does well cos I’d rather everyone in this league did ■■■■ apart from us but yeah.

A4 Is not an acceptable answer!

I liked Josh’s work rate, he would run through a brick wall for you pre injury, but was never a prolific goal scorer, after the injury he just turned into a liability.
But i do thank him for his service to the club, and i hope he rediscovers his work ethic

Always felt the issue with JG was that he was a decent instinctive finisher (recall the back heel against Sunderland) but struggled with composure when it he was through on goal or had time to pick his spot.

Wish him well, though. One of the more likeable players from the shower of ■■■■■ we’ve had over the last few years.

Worked hard, nice bloke too, but his finishing was appalling

Felt he was coming good at end of 18/19. Bradford home game he was brilliant and also did well linking with Cook v Posh. Never a CF given his mediocre finishing but o.k second forward. Then had personal issues I think during summer 2019 which meant very slow start to the next season before he got going around xmas period and was linking well with Ade.

Not sure what happened after this season’s injury but he wasn’t good at all and just became a defensive striker.

I wonder how much of that was Him or the brain dead coaching staff?

Josh Gordon will never make a footballer while he believes an integral part of the game is falling over a lot.

Whatever he’s done here over the last three years, I’m not sure its fair punishment being sent to Barrow for two years… (the place that is, nothing against the football team).

Having said that, if the alternative was Burslem then fair enough!

He was also very good v Barnsley at home. He missed several good chances, let’s face it we know his finishing isn’t up to much. He ran them ragged with his movement and mobility that day though. There looked to be a player with real potential at that point. His movement looked good, lot’s of diagonal runs and he occupied two center backs by himself.

As you said he didn’t come back the same player for the start of the next season, rumours of personal problems. He was played out of position by Clarke mostly but still did a reasonable job until his injury. Based on his performances after his injury, he has gone backwards. I’m not one for saying “someone told me” but I did hear he has wanted away from Walsall for some time now. I think any potential he had has been drained out of him by a number of things such as poor coaching and management and possibly other things going on in his life.

I wish him well because he was one of very few that kept at it during our relegation season when others had downed tools. He isn’t young in football terms now, but still young enough to resurrect something from his career.