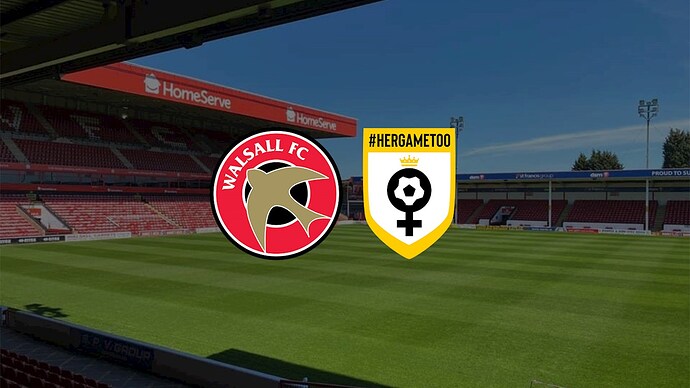 Walsall Football Club are proud to be supporting #HerGameToo with a dedicated match to the campaign at this Saturday’s game against Sutton United.

I’ve been attending since 79/80 and thankfully have never encountered an issue with regards to me being female.

The one positive about attending Walsall games is that you do feel comfortable attending games male or female , my wife has been with kids and even went on her own few times , never felt unsafe or uncomfortable so that’s a positive.by the way I couldn’t arsed to go incase you was wondering

Kitty Lyons loved going to see the Saddlers, home and away. Never heard her talk negatively about attending Walsall (as a female). Came from a much less “liberated time”.

Mental.
In my 50 years supporting Walsall, I’ve never seen or heard any negativity towards our female supporters.
Woke bollocks of the highest order.

Why can’t the club just stick to putting the things that they do wrong right? instead of trying to put something right that doesn’t exist

I remember Kitty Lyons from the away games.

Never known there to be the slightest issue with our women supporters in all the time I’ve gone. Quite the opposite tbf.

Only thing I ever saw that was bad was after a Walsall Albion game, years ago, were an Albion fan had punched a female Saddler just before everyone had left the game.

One of the very few times, had they still been there, that I was pissed off enough to have actually had a scrap over what is just a football game.

Woke ovaries of the highest order.

I agree, I haven’t been aware of any female Walsall fan saying they weren’t going as they felt unsafe which is a positive thing. I would feel more unsafe walking through Willenhall on a dark evening.

Don’t see why someone would get angry at this, it’s not an attack on Walsall it’s just a campaign to highlight sexism in football and also to encourage women into the sport. A movement to improve society somewhat, down with that sort of thing?

Never seen an issue with anything directed female fans as such, but remember hearing a few blokes at Carlisle just before the lockdown shouting abuse at the female assistant referee (sexist stuff rather than about her abilities running the line). My other half’s first Walsall game and can’t say she was too impressed or that it made her want to rush back

It’s a national event, not something Walsall has dreamt up for a larf.

Ruffled feathers again though. ‘Woke’ etc. Angst not seen since the abomination of the World Cup.

Why do you always try to belittle people that have a different view to your “progressive” outlook on life?

Clean the bogs that might pursuade a few to come

Woke bollocks of the highest order.

Your robust, no nonsense opinion.

I thought I was quite restrained in mine. What ‘belittled’ you? Ruffled feathers or angst?
From fully having at it with ‘woke bollocks’ to claiming you’re being belittled after one post.

I just thought that a candidate for the ‘most obscure signing’ had escaped into their own thread. A Brazilian who played for 20 minutes against Lincoln City in the 90’s or something.

Woke bollocks of the highest order.

I am cheered and unruffled my friend. Sitting in the ASBO bar anticipating a good afternoon.

As for the discussion, I was adding my two penneth to the subject matter, whereas you were more interested in playing the man, as they say.

This is, in my view, wokeness bullshit personified. As @Andy_Petterson described it, patronising. I fully applaud and support actions taken to eradicate racism and to enhance the match day experience for people with disabilities, but this is really a non issue with respect to women supporters.

The clowns that run the game and the media people that promote it via their products are deluded if they think that the average female fan is representative of the ones you see on the Heineken / Sky / Pizza adverts - the professional Milenium classes. Not seen too many of those around League 2. Same as the women in the adverts for Foxy Bingo

I wonder how embarrassed the club will be today when they are “educating” us, knowing that every member of our board / executive is a white man?
Maybe an opportunity was missed when appointing the SLO?