Get your tickets booked. 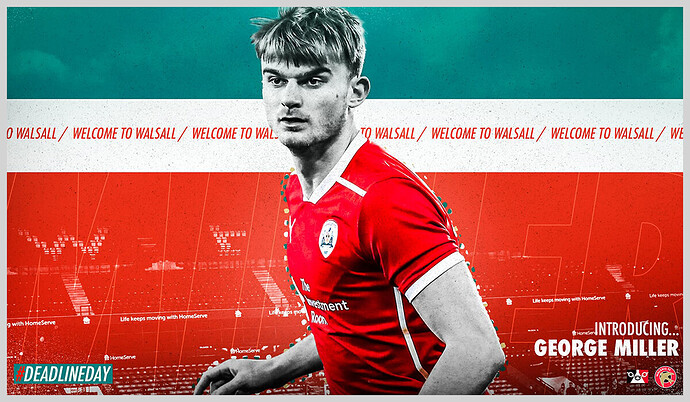 Walsall Football Club are delighted to announce the signing of forward George Miller on a season-long loan from Championship side Barnsley.

Miller began his career at Bury and made his professional debut back in February 2016.

The following season proved to be his breakthrough year at Gigg Lane as he featured 31 times and scored eight goals in all competitions for the then Sky Bet League One side.

That form caught the eye of Middlesbrough who snapped him up in the summer of 2017.

He made just one first team appearance for Boro and was subsequently loaned out to Wrexham in December 2017.

A month later, he re-joined Bury on loan and went on to score eight goals in 19 matches.

In the summer of 2018 he joined Bradford City, again on a loan deal. In the following January, Barnsley secured his signature on a permanent basis and immediately loaned him straight back to the Bantams. He scored a total of six goals during the 2018/19 season at Valley Parade.

A further loan spell followed for the 2019-20 campaign as he moved to Scunthorpe United where he made 19 appearances.

He’s played nine times in total for the Tykes but is now set to embark on a new challenge with the Saddlers this season.

Taylor is delighted to have secured Miller’s services.

“He’s a player like a lot of the other players that we’ve signed this season had considerable other options but he’s chosen to join us and we’re extremely pleased about that,” he said.

"He’s at a very good age, he’s got exceptional experience of league football and he’s desperate to get better. He fits our ethos at the football club of developing as a group of people so we’re extremely happy that we’ve managed to secure his signature for the coming season.

“It’s not a secret this season that we’ve created plenty of chances so to have another option to add to the forward line is positive for us. It adds competition in that area of the pitch which I think we need.”

The transfer is subject to EFL and FA approval.

Want to change how you receive these emails?
You can update your preferences or unsubscribe from this list.

Seems he’s spent most of his time out on loan so hopefully he’ll benefit from a good run in a side? Be nice to have another option at least, the bench looked very sparse Saturday.

Looking at his record, what system did Bury play to get the goals out of him.

These are some comments from a local journalist…it doesn’t sound very promising, but give the guy a chance.

I have made some disparaging remarks towards George Miller recently.

I wish to apologise to George for making them.

The lad no doubt is doing and giving his best and whilst he may not be championship quality in my opinion it does not give anyone the excuse to write comments that are not acceptable to a young professional footballer.

Good luck in your career in football George where ever it may take you.

Barnsley didn’t have a good opinion of our club.

Don’t we have a good opinion of our club

I think most of us do, but we ain’t half got some whiny fans.

Imagine, after these signings and the performances so far, calling our fans, who pay to watch this shit whiny

Guess your not paying to watch the shit?

Today in ‘posts that age well’

Best team in the league mate, what you on about?