Message Of Support For Darrell Clarke

Everyone involved with the Independent Saddlers Supporters Association are saddened to hear that our former manager Darrell Clarke has experienced a close family bereavement.

Football rivalries should be put to one side during difficult times and replaced with compassion.

We have received a lot of messages of support for Darrell from Walsall supporters and have been asked to pass them on. Our thoughts are with Darrell during this difficult time.

Has this been passed on to Vale? Might be worth mentioning that the vile trolls on Twitter/FB do not represent us in any way too?

UTS Facebook has already denounced them. Not fans, thugs.

Does anyone actually know who’s passed?

None of our business.

Well done ISSA. One of those occasions when it does us all well to remember that football isn’t all that important, in the grand scheme of things.

It might not be, but it’s unusual unless it’s very serious.

Yes, I agree with this

Is this message being sent directly to Vale or just being posted on here?

Yes it is. Very best wishes to him and his family. I found him “difficult” as our manager, but he’s a human being who is suffering, so I really do wish him well.

It has been posted on here and on some Walsall social media pages, including the ISSA Facebook page.

I have emailed Port Vale this morning.

Regarding the trolls. I don’t think it was right to include anything about them in a sincere message of support for Darrell. Far better to show that the majority of Walsall fans are good people who wish him well.

Agreed, sorry to hear of his loss

As I posted before, sincere condolences to Darrell and his family.

Indeed! I echo the sentiments posted in this thread & I offer my sincere condolences to Darrell & his famiiy.

It’s a shame some people can’t separate football from reality.

Condolences to Darrell and his family.

Despite what we thought of him as a manager (good or bad), we should put those feelings aside and wish him well through this difficult time.

The article from November about Darrell Clarke written by Henry Winter in The Times has probably been referred to before on this board, but I hadn’t seen it until tonight. It is well worth a read. 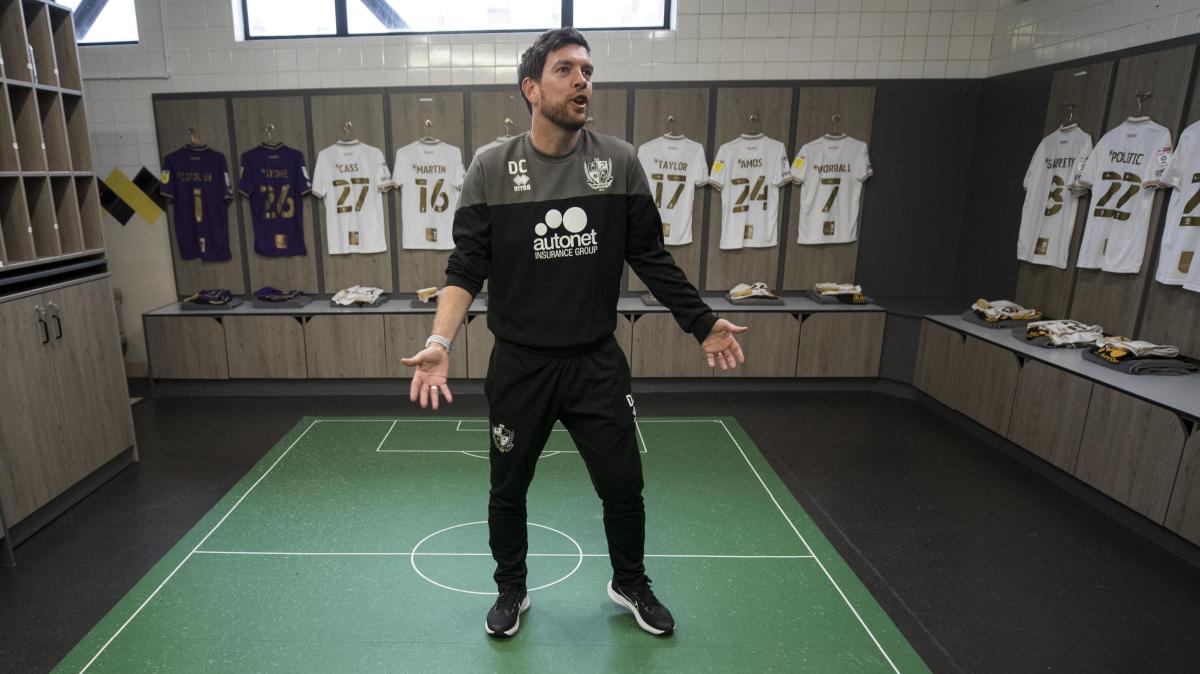 Darrell Clarke: My dad was a disgrace of a man. I never regretted cutting him...

Darrell Clarke sadly has no memory of his mother, who died in a car crash when he was two, but the Port Vale manager willingly blanks out all recollection of hi

It is behind a paywall, so here are some quotes from it:

Darrell Clarke sadly has no memory of his mother, who died in a car crash when he was two, but the Port Vale manager willingly blanks out all recollection of his alcoholic father who used to wave the insurance money from his mother’s death in his face.

Clarke is today named manager of the month for the second month in succession, Vale lie second in League Two, are into the second round of the FA Cup, and beat Liverpool Under-21 in the EFL Trophy this week to record their best home run — seven wins on the spin — since the revered John Rudge was manager at Vale Park in 1993.

A hard-working midfield player for Mansfield Town and Hartlepool United, Clarke guided Salisbury City to promotion twice and achieved the same with Bristol Rovers. Clarke, who joined Vale from Walsall in February, is charismatic, full of opinions and ambition, and very driven. “I’ve got an edge about me,” he explains, sitting in a hospitality suite at the ground this week. “I just love shutting people up and proving people wrong. I’ve managed nearly over 500 games now and I’m only 43.

“I’m driven. That comes from my upbringing. It’s a rough old town, Mansfield, but you don’t forget your roots. I grew up on a council estate. Mum died in a car crash when I was two and my brother was three. Her partner was driving. She died on my gran’s birthday. So it was never a birthday for her after that. My gran won custody of us in court which is unheard of. Normally the dad would get you. Dad was an alcoholic.

“I had no connection with him. When I started playing, nothing. I saw him once a year and he was pissed. I was always scared when there was a knock on the door and it was Dad. I know he hadn’t been nice to my mum.
“I was about 15 when he was dying in hospital and a nurse rang me saying, ‘Your dad would like to see you and Wayne.’ I said, ‘He can f*** himself.’ I’m like that. Cut people off. I never regretted that. Never. He will never be a ‘dad’ to me. Never. A real dad is somebody who supports you for your life, is always there for you. He was never there for me. He was a disgrace of a man.

“It’s made me a better dad. I think my two daughters would agree with that. I give them what I didn’t have. Gran didn’t have a pot to piss in. Dad came round the house, pissed. He got a bit of money for Mum dying and he was flashing all the money around in the air, giving it the big ’un. My gran said, ‘Darrell, it’s the only time I’ve ever stole anything.’ She took some of that money and put it under a pot so she could buy me and Wayne some stuff.”

After the 2015 play-off semi-final win over Forest Green set up the final with Grimsby Town, Clarke was in a cab heading for a meal with his wife when they passed the Queen Vic, a legendary Rovers pub. “I knew the Vic would be bouncing, so I just walked through the doors, put me arms up and shouted ‘Wembley, Wembley’. The place erupted. “The worst thing, right, is they made me do a speech, and silly enough, after a couple of pints, I stood on this stool singing, ‘We are going up, say, we are going up.’ We’ve still got the f***ing final to play! The next day the Grimsby Telegraph put it online: ‘Look at the Rovers manager already singing we are going up, disgrace.’

“I was gutted, thinking, ‘Oh my God. I don’t need that pressure.’ Then we won. We had a private party in Bristol and the lads got me to do another speech. This time I’m on another stool and said, ‘I done this a couple of weeks ago, a little bit premature,’ but then I went, ‘but we are going up, we are going up.’ Then I went, ‘So Grimsby Telegraph, print that bastard.’ And they did print it!

“Rovers fans absolutely loved it. We did that tour all around the city and they had ‘print that bastard’ flags and ‘print that bastard’ T-shirts. I’ve played Grimsby since, they were singing ‘You’re getting sacked in the morning’ to me when they were 4-1 up at Walsall! I still have banter with Grimsby fans. It’s so stereotyped, football managers, you talk to the press, you don’t mingle with fans. I like to be a bit different. The game’s about the fans and you have to enjoy the good moments as a manager.

“I don’t want to manage a team that stands still and this was my biggest frustration at Bristol Rovers is we were standing still as a club. I sold nearly £2 million worth of goals out of the team. Then you become a sitting duck. At Walsall the club sold £800,000 worth of player replaced with £40,000. I’m begging for free loans.

Seems like Darrell Clarke won’t be returning to management this season. Whatever has happened it’s clearly devestating for him and I wish him all the best.

Must be someone very close to him! Having lost a dad and a wife I can very much emphasise - make the scum who were trolling even more detestable!!

All, leave the rumours off UTS, and respect DC’s privacy.