Haven’t seen this posted anywhere else but the club are linking these two games - our last pair of the season. Essentially buy a ticket for both games in the Homeserve and save a tenner. That’s a tenner saving regardless of whether it is adult or concession.

Good shout and I hope it is well supported.

This should be meaningful for both sides who should both sell out their bit. Back to an old hobby horse of mine - I’d give them both more than the 2,800 that gives them behind the goal and half the family stand. I’d either vacate the family stand (I know this compromises some season ticket holders but a swap for a centre stand ticket on the other side with access to the bars is surely OK?) or logistically easier give up the block and a half at the end of the Poundland stand. Think that might compromise about a dozen season ticket holders who surely would be cool if they were merely moved to better seats twenty yards to the left.

Anyway, both games should be good occasions and I hope this initiative means there’s a few hundred more in our end to spoil the oppositions big day out. 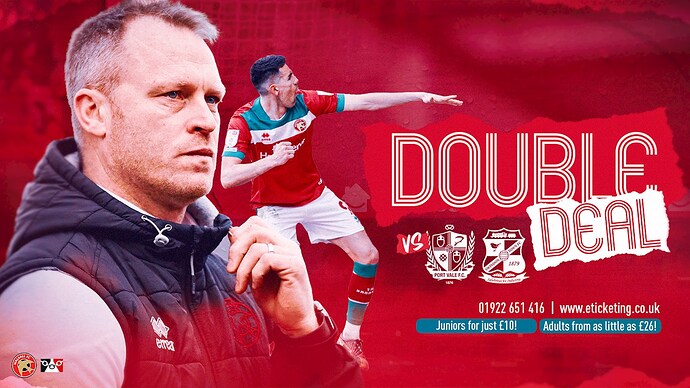 Watch the Saddlers’ final two home games of the season at the Banks’s Stadium against Port Vale and Swindon Town for discounted prices with our match ticket link-up offer!

There is a reasonable chance we will be wrecking at least one cup final.

Just spoke to my old man and we will be getting these I think it’s an excellent idea/offer should be a good atmospheres in both games with the away sides up there and bringing a fair few.

Yes looking forward to these 2 games . Just sad really that our highlight of season will be having the chance to spoil vale and Swindon’s promotion chances. Still should be 2 cracking atmospheres with bescot bouncing .

I’m back for the last 3 um games, so will be having some of this.

It sure is. Lets hope the club get around to advertising it.

Just read that Swindon have sold their allocation of 1,500. Hope we give them more. Many more.

Do ST holders get a few bob back !? Joking aside, stadiums should be rocking for both, just hope there are as many home fans as away fans at both. We tend to do quite well once season is ‘over’ and there is nothing left to play for. Looking forward to spoiling both parties

And we need to do it sharpish. Their season could have bost or be decided by then.

There were Swindon fans on Twitter at the weekend responding to the news that they had sold out, commenting that there would be a few seats free in the home end. 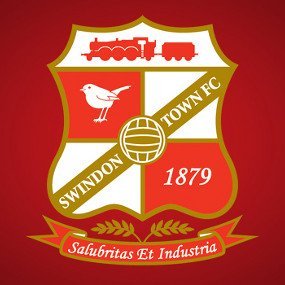 @STFC_Ticket
SOLD OUT: 🎟 Our trip to Walsall (07/05) on the final day of the season has now sold out!! The team will be backed by 2K+ fans!! This is an incredible effort! We have asked Walsall for more tickets and awaiting confirmation! 🔴⚪️ #COYR

According to this, we already gave them more and they sold those already too.

We should keep giving!

There are four big reasons.

The first is plain old money. At £20 a throw an extra 2,000 gives £40k plus sundries minus some additional expenditure. Equivalent of around 120 season tickets. Not to be sneezed at.

The second is more of a moral thing. It’s only football where you could have 5,000 empty seats and yet keep thousands out. If there’s space it feels right to try to ensure everyone who wants to come and watch a game of fourth division football should be allowed.

The third thing points to the reason why the second thing is a thing and that’s segregation. If this game really matters to Swindon and there are thousands of available seats in our end then there’s no doubt that plenty will try to get tickets.

The fourth is that after the last few years a 9,000 plus crowd would just be ace. We deserve an occasion.

They’ve sold 2,000. We could give them the same again and 500 on top (which still might not completely satisfy demand) and still accommodate every Walsall fan who wants to attend albeit a few might have to sit somewhere different. The club should really put in a shift on this and the Vale game to try to ensure everyone who wants to attend can. And logistically, it’s not that hard.

This is a terrific offer, fair play to the club for offering it, hope it gets a good take-up but some of the other offers have had quite superb responses so I expect the same here. Should be some bumper 6,000+ audiences.

There were Swindon fans on Twitter at the weekend responding to the news that they had sold out, commenting that there would be a few seats free in the home end.

Our fantastic away support helps fund other clubs. About time the favour was returned!

Give them and Vale as many as they want, that extra income alone could fund a player for us.

So Swindon have sold out their whole allocation plus more with plenty demand still remaining and that’s the week after vale - so how many have vale sold? with them being more local and looking to go up automatically, they should have sold out by now too right?

Not sure they’re even on sale for Vale fans yet.