Physco Johnny Kiester was the song , deffo up there with the hard knocks

I now realise that Liam Kinsella is Nick Atthey 50 years on. I suddenly feel very old,

Matt Preston never used to shirk a challenge. I remember Lalkovic doing a Q&A segment years ago with Dale Moon saying he was like a tank and would ‘…go through a Chinese wall’ 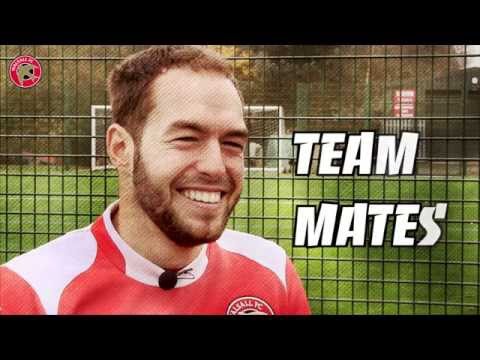 Wish we could do segments like this moving forward with the current team. Looking back on our YouTube page there are lots of ideas from Dale Moon’s time which could be recycled and used again.

I agree with this one . But I remember watching us against one of the Bristol teams (I think) and they had Joe Jordan as centre forward after he’d dropped down the leagues, later in his career. He took Forbes apart, successfully fouling Forbes at pretty much every ball they went for, all whilst making it look like he’d done nothing wrong, maestro dirty bastard’s performance, you could see why he had no teeth. Have to say that he has to be one of the best players I’ve seen, and when he wasn’t at his best by then.

Ada, johny Gale substituted for his own protection at Northampton after going in late on Wacka, our fans singing Ada’s gonna get ya and he didn’t disappoint. First time and everytime after Gale got the ball he was taken out, less than 10 mins later he’s taken off.

How I would love this lot in our team again.

As @JumboTrudgeon puts in his list, without a doubt the “hardest” player I have ever seen at Walsall was Roger Hynd. Quiet with it, but he stood for no messing and let the opposition know he was there.

If we mean strongest and can take a knock, there have been many but my top three would be George Kirby, Bernie Wright and Roger Hynd.

After them MO’C, Graeme Forbes and even Stan Jones.

Keister was more dirty than hard. Stan Bennett was fearless too.

Of the current crop, Manny Monthe looks pretty immovable to me and I liked the comparison between Athey and Kinsella.

I’m sure I remember Mark Rees coming on as a sub at Fellows Park and getting sent off after about 5 minutes for a tackle.

Remember Forbes having a fight on the pitch with one of own players, Alex Taylor I think it was, can see it now, over a corner we gave away I think

Andy Dornan, I think it was.
Came out the dressing for the second half hugging to show they had made it up between themselves.

I remember one night game at Fellows Park, can’t remember the opposition; Mark Rees was taken out by the fullback right in front of the players ‘tunnel’. Play continued and the ball was cleared down field

Rees and their player were having words as they got off the ground then, Rees had a quick look around for the ref before planting a right hook on the player which ended up with him sprawled across the wall.

Rees sprinted off and over the half way line before anyone on the pitch knew what had happened. Legend

I remember a game back in 83-84 or 84-85 I suppose, when Mark Rees had been fouled and was rolling around in agony, holding his leg, so Garry Pendrey ran on with his bucket and sponge, ran towards Reesy, then veered off, threw his bucket down, and squared up to the player who had done the foul.

Things were calmed down and he got on with the treatment, but it was quite funny.

Remember Brian Caswell doing it after being on the end of a bad tackle, play went up the other end and Caswell sat astride the other player while giving him a few slaps around the head before leaving him lying there

I remember a facebook post that Mark Rees was on and I mentioned that sending off. He chased down a through ball to the keeper and took him out about 5 seconds after the keeper had the ball in his hands. He is still livid about it cos he got fined a weeks wages

I thought it was Dornan that Forbes had a go with but I could be wrong, I do remember it happening though.

Rees against the keeper was Gillingham, possibly Ron Hillyard.

Was that against Bury? He was sent off for fighting, and on his way off the pitch he started fighting again? Might be another game, but Bury rings a bell.

Definitely Forbes on Dornan. I was there and remember it clearly.
Totally uncalled for, and Fobber went down in my estimation after that.