Earlier this week, I spoke with Gillingham fan Matt, who runs his own YouTube channel - GillsInTheBlood. Here’s what was discussed:

Q. Let’s start with some recent big news for your club - it appears that Paul Scally is looking to move aside, and Paul Fisher has been brought into the club as Co-Chairman & CEO. How has this been received by your fans as from what I can see, Scally isn’t much of a loved figure?

A. He’s stepped aside for an extended break according to the statement he put out. In terms of moving forward it is too early to tell; the new man has said the right things so far, but just how much control he will ultimately be allowed remains to be seen.

Q. Has anything changed in the short time since this appointment?

A. No nothing at all so far, apart from Mr Fisher saying that first & foremost we are a football club. That was received well by the fan base.

Q. Many people were surprised to see Neil Harris appointed as your manager during last season, mainly I expect down to the league position you had. Was this appointment a surprise to you?

A. Yes, a massive one. Based on where we were & how far adrift we sat I assumed it would maybe be a caretaker until the end of the season & then assess who was available. Credit has to go to Mr Scally on that appointment.

Q. After appointing Harris, he galvanised the team it seems and actually nearly pulled off a near-miracle in keeping The Gills up, given where you were when he was appointed. Are you confident that he is the right man to get you back in to League One, and perhaps further?

A. I have said all summer he is the best manager at the level, but what we have to do is make sure we give him the tools to be successful. Whether that success is an immediate return to the division above I am not sure, because we have to learn how to consistently win matches again first.

Q. Looking at the season so far, it’s not been a great start for you with just one victory across all competitions, and only one goal scored (in the league). Is there anything specific behind the slow start?

A. Well it’s three scored in all competitions, but overall the same old issues of last season have resurfaced which is us not being good enough in either box. When you’re not scoring at one end & conceding too easily at the other it’s clear you won’t win too many games of football.

Q. What do you feel is a realistic aim for The Gills this season?

A. I had us just outside of the Play Offs in my summer season preview, but my concern is that if we lose too many early on then confidence will swiftly be at rock bottom again.

Q. An intriguing fixture awaits, with both teams having points to prove to themselves and their supporters. How do you see this game going?

A. I think if we can start on the front foot and score the first goal then we can get something. However, if we have to chase the game & and allow you to pinch the opener then it will be a long afternoon as I genuinely cannot remember the last time we won from behind.

A. Based on the last three halves of football I’ve seen, my heart says 1-1 but my head says 2-1 to Walsall.

Q. Finally, for any travelling Saddlers, where are the best places to park, and to also grab a bite to eat / drink?

A. If arriving early enough then you may get down one of the nearby side streets, but anything immediately surrounding the ground is I believe for permit holders only. There is usually a decent enough burger van outside the main stand, and the town centre is only a short walk away with all the usual offerings.

In terms of a drink then head for The Fleur de Lis, The Britannia or The Cricketers.

Q. Any Other Business - anything you want us to promote or mention to our readers?

On Wednesday, I spoke with Matt for his channel about the upcoming fixture too - you can find that here - 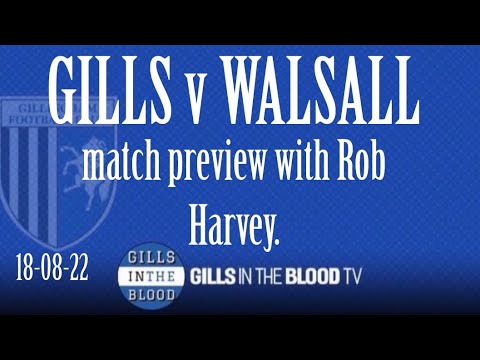 That was excellent Rob and Matt, really enjoyed it. Is this something you can do for future matches Rob? The written Q&A is great but this was even better.

Probably need a box set to fit all that in.

Zoom runs out after an hour I think

Saw his channel a few times i like it

Blimey that Gillingham bloke did well to get an interview with Oleksandr Usyk the day before his big fight with Joshua. Why’s he talking about Walsall though??

did well to get an interview with Oleksandr Usyk

First time I’ve had that

Eyes of a killer!

I am more scared by the one on the left