Walsall fc could be back playing 6th June

Unconfirmed reports reveal that there is a plan to re start the season on 6th June. Sadly although for all the right reasons it will be behind closed doors.

There’s the link mate.
ESPN are reporting it. 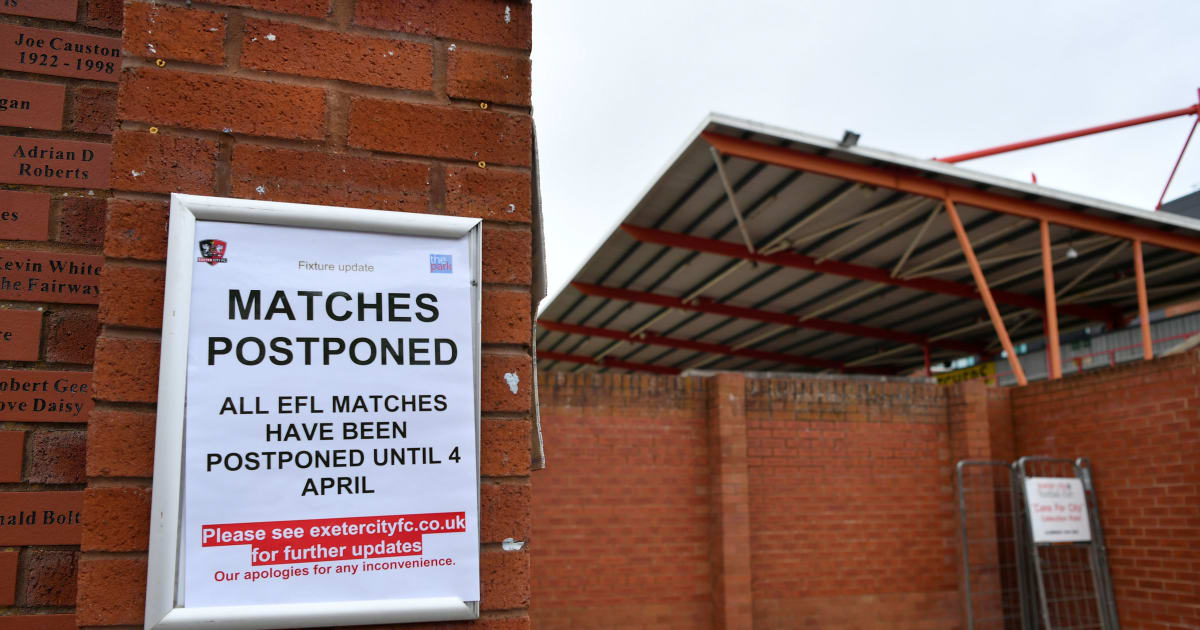 sons ​The EFL are aiming to get the football season back underway within the next two months, with 6 June pencilled in as the date for proceedings to resume....

IF, and it’s a big if, they let fans back in to grounds (more lower league because of numbers), I feel it will be ST holders only, capped to a capacity of say 2,500 - 3,000 in any case regardless of team. I also think you won’t have away fans allowed in any game until 2021

I don’t get why the EFL keep setting stupid return dates. Until the government even begins lifting any measures then there’s nothing they can do. Just manage the situation and set a return date when you know you’re actually allowed to start playing instead of trying to rush the football season to carry on. Think there’s more important stuff to a pandemic.

Unless everything is going along smoothly With no need for any sort of decision making or anything then they really are a crap organisation. That’s why they are trying to rush it back so that they can get back to not having to make any decisions about anything other than who the best manager was last month.

Should we expect D.C. to re-start slowly?

If it’s true then the restart, whenever it comes should definitely begin behind closed doors. Season ticket holder or not (I am), there will be some no doubt who moan that they aren’t getting what they paid for. Simple solution, make the games free to air on the iFollow for those who have paid in advance.

I agree with you about the reduced capacities.
For one thing, why should those who live near football grounds be expected to put up with thousands of visitors from all round the country, it would make a mockery of the whole lockdown thingy. Same goes for festivals, race meetings, other big events, it isn’t just the social distancing inside, it’s the interaction with local communities.
I’m with you, I think it will be behind closed doors, if the Government allow it, and reduced capacities for some time when it does get back to “normal”.

If there will still be restrictions on gatherings that prevent fans from attending, how can 22 players + 14 subs + 4 officials + X managers/coaches/physios/other “benchers” + league observers + press/cameramen + groundsmen + whoever else all meet up for a game to take place? Not to mention how you actually play it when social distancing means you have to keep 2 metres apart (so tackling and other competing for the ball is out)?

Even if they keep apart on the pitch and the rest of the ground, away teams will usually travel together on a coach and/or stay at an hotel the night before - further close congregation and exposure to drivers, hotel staff, etc.

Then there’s the idea of a World Cup style tournament to play all games together - involving multiple teams congregated in the same place increasing the chances of transmission? Would be as many people mingling as some clubs get as a crowd!

And if you make an exception for the EPL/EFL then you have to do it for all “non-essential” jobs, and “lower risk” population. I just can’t see it working until the restrictions on everyone are lifted to the extent that you could also have spectators present - and the way it’s looking for that, to me June 6th is a very optimistic target. Plus (as others on here have pointed out) many players will be out of contract by then so how can you force them to stay on to complete fixtures with a club they were already planning to leave or, conversely, it be fair for clubs to change their squads for the final few games when they wouldn’t have been able to otherwise?

Luke Leahy was ahead of his time.

There was an expert from Italy talking on BBC1 this morning and amongst things he said he didn’t envisage any large scale gatherings being allowed within 12 months.
Of course, much depends on the definition of large scale…

Maybe all those involved will have to have been tested in advance before it can commence?

What difference does that make even if it is practical and when there is a shortage of testing kits for more important people?

I said “before it can commence”. If the testing programme is not sufficiently developed by then I can’t see it happening. Of course there will be a pecking order and 4th div footballers won’t be at the top.

The difference it makes is the same difference in any scenario. Knowing who has and hasn’t got it / had it. This enables better decisions.

I heard that yesyterday and one top Italian said no bars or restaurants would be open until there is a vaccine.
Thar is scary.

I don’t think June 6th is all that optimistic, it’s almost 2 months away.Two months ago people had never heard of this virus. Progress is being made, not as fast as we would like, but progress all the same.
I can’t see fans being allowed in grounds until it’s medically safe to do so.
Some countries have “peaked” and are seeing rapid declines in hospital admissions death rates, we’re are not there yet so we still have to be cautious.
I just lost a good friend of 45 years to COVID-19.
Please be diligent about social distancing and stay safe.

So sorry to hear that. Dan Evans our number 1 tennis player had it right at the cancellation of Wimbledon saying sport is of no importance at all at the moment. JuSt wish the football people would stop hypothetical posturing and call the season void. So many complications and unknowns to warrant finishing the season. I’ve put my tin hat on for the flak😀

I’m pretty sure I’m right in saying that Wimbledon had specialist pandemic insurance. How clever is that? I don’t know who pushed that through but when this is over does he/she want to come and run a Division 4 Club in the Black Country? Or be the new Prime Minister perhaps? Brilliant piece of business and I bet at the time lots of his colleagues were saying “really? Is this necessary?”

I’m sure it was some Chinese guy …