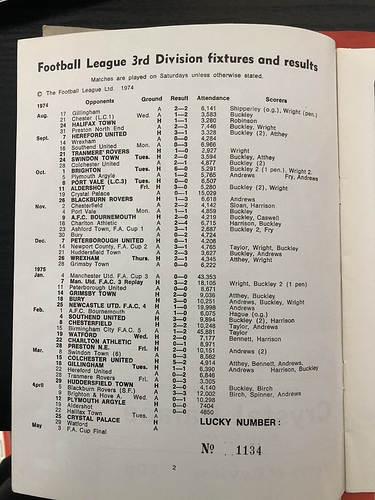 I mentioned over the weekend that I was reorganising my old programme collection. This has to be my favourite season a a Saddler. Was 13/14 years old and it was magical. Apologies to the younger posters for the self indulgence.

For completeness we won the last home game 3-0 on the Friday night against Palace and then played Dirty Leeds in a testimonial for Nick Atthey.

Would agree, although I’d been going since 69 season think this was the season that planted the seed of lifelong love of the saddlers , probably down to seeing Buckley in his pomp

2 draws against The Gills…somethings never change.

Hadn’t realised the crowd at St. Andrews for the 5th round FA Cup game was that big.

Interesting to see the increase in gates around the time of the FAC run. Regularly hitting 9 and 10k !

71/72 was my first season, but same for me with Buckley. When he arrived it seemed to change everything. Hat trick on his debut in our local local derby was the start of something special.

Shows what a cup run could do, especially when the cup meant something to the top teams.

And the 10k v Preston was helped by the attraction of their player manager at the time, Bobby Charlton.

74/75 would appear to have been the catalyst for a significant improvement in support over the next 3/4 seasons too.

Finished 8th in the end with 49 points, six points of a promotion place. Only 2 points for a win in those days of course. 35 of those points came at home. Always remember in my early years going away, we didn’t win many

Blackburn won the league with Plymouth second and Charlton third.

Didn’t you need the ticket stubs from the home games between rounds, to get first dibbs on the next round’s cup tickets? I say that as a ten/eleven year old (at the time) who went pretty much every home game that season; but wasn’t allowed to go to the Man U games as my mom was worried about their reputation for aggro at the time. Used to go with my unlcle, 2 older cousins and sister, one of my uncle’s mates got to use my stubs instead…Still bitter after 45 years.

Yes you did and I remember queueing on a Sunday morning all along the road at the back of the main stand to get the tickets for the man utd replay…what a night that was!!

Was fortress FellowsPark in them days, sent some good teams packing.

My first half season aged 11. First two matches were Bury and Newcastle. I was hooked after that. What a team we had that season. Wish we never left Fellows Park.

We had a bad run for a couple months running up to Xmas which cost us, and two goals from Derek Draper knocked us out of the League Cup at the first hurdle, but the great football and those wins in the F A Cup were fantastic. Might be my favourite season, apart from 98-99 which will never be topped, although 83-84 is a contender too.

PNE on a friday night, ‘ommerin’ Brighton midweek early in the season (they paid us back with interest a couple of years later

) and great goals from The Buck and Big George, there were a lot of highlights.

My first season too. Friday night v Aldershot on 11th October. Three nil win, with two from Buckley and the other from Bernie Wright.
I was hooked after that.

Went to all the home games and a few aways in the cup. At the age of 10, that was me converted! There was footage on the local news of the wins against the Uniteds, if only it still existed…
Blues away was the main match on Star Soccer, I remember being star struck when I saw Hugh Johns up in the gantry.

Blues away was the main match on Star Soccer

I watched it in the hope that surely we would play better than the day before. Alas…

My all time fave season as well. And not just for the FA Cup run which was fantastic but the quality of football under Doug Fraser that season was superb. For me what made that season so special was George Andrews. He had been messed about by Ronnie Allen whilst he was in charge tho was given a chance in the latter half of 73-4… By 74-5 he really was a constant threat to defences and linked up well with Alan Buckley and Bernie Wright. The league results in January of that season were excellent and there was such a feel good factor around. March and April not so good but ended on a high with the 3-0 victory against Palace (Andrews, Buckley, Spinner) and 3-2 at Watford (Andrews, Spinner 2 )

Yes, it was an anti climax after the two previous rounds. They were on a poor run at the time and expectations were maybe unreasonably high.
I reckon that we would have turned them over at home though.

What became ot Terry Spinner? One of my all time favourites was in that team. BrianTaylor