Adebayo on his way?

To Hearts? Would be a big blow . 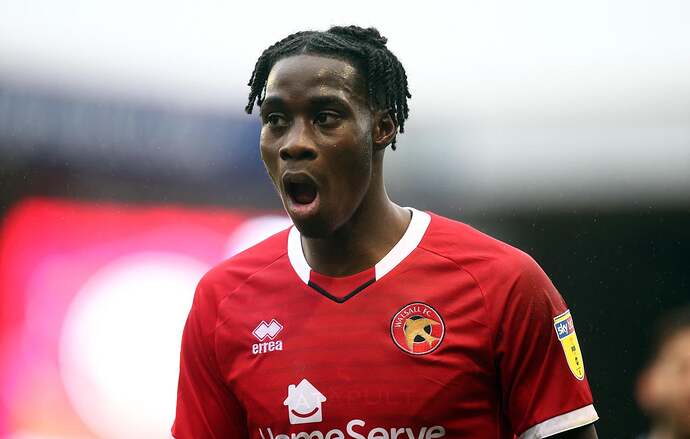 Hearts want Walsall’s Elijah Adebayo to fill their striker vacancy if they can agree a deal with the English League Two club.

Tbf, if I had an excuse to move to Edinburgh, I’d snap arms off, never mind hands - love that city.

Given we’re stuck in this league (forever?), might as well get a fee for him now.

Would be a great move for him.

With his contract running out I’d sell him for 50k - 100k + add ons, especially with money being tighter than ever

If he’s not going to sign a new contract might as well cash in. Will be missed but the lad has got bags of potential and can’t blame him for moving on.

I agree. His contract is expiring in the Summer and unless he is prepared to sign a new deal it would be best for him and the Club to let him go now. With some of the highest earners going then it maybe we can offer him a substantial rise but we won’t be able to compete with Hearts so with a heavy heart I think we should say goodbye now. Hopefully the fee will be used to boost the money available in the summer for new players.

Be a good move for the lad. No doubt about that. And one he deserves.

But. If he does go it will say. A lot about how serious we are. Of. At least trying to get out of this division, Will be a massive. Signal of lack of ambition. In my opinion if the lad leaves.

I’d even chuck Sinclair Guthrie and lavery in with deal 4 players for the price 1.

Not really you can’t force a player to sign a new contract no matter what team your are, no doubt Adebayo has got his agent in his ear selling him the dream. Don’t think you can blame the club losing a player to likes of hearts

He can go for me, there’s no point holding back talent it’s not fair.

What will be interesting is what we do with the money.

I doubt that there are many 4th division players that wouldn’t move to Hearts.

And a promotion on his CV potentially.

In fairness to him if he does leave, he’ll have earned it.

When we signed him was there not suggestions he’d had attitude or application problems while at Swindon (or something along those lines). I wouldn’t say we’ve seen any evidence of that from him, and he now looks a different player to the one at the start of last season, he as well as Holden looked fairly poor to me at the start but both have come on massively.

Presumably he’d have come here with the intention of proving himself to be capable of being a football league player, if not he’d have probably been in non-league fairly soon. But whether its through his own hard work, Marcus Stewart or Clarke etc, he’s massively improved.

Would be a blow for us but fair play to him.

If they sell him, then I’m done with them for a while.

This would be a disaster. Not sure what we can do to keep him to be fair, and fair play to him. No player would turn this move down.

The only thing we could do is invest the money in a striker NOT a free loan. I’m sure there’s a reason this isn’t possible for little old Walsall.

He is one of only about 3 bright lights to keep fans interested in this team, and if he does go then you can say goodbye to ANY chance of getting out of this dustbin of a league for the foreseeable future, lets face it, we will get no more than £100,000 for him? who or what can you sign with any degree of pedigree for that?

That’s how I feel mate. I just can’t be bothered with the people who run the club anymore - regardless of Adebayo etc.

​I understand that’s football, but really, I just don’t want to see that news. Replace him now? Close to impossible, so big loss, if he leaves. But why shouldn’t he? That would be a big promotion for him. And that’s why Reid was loaned.