Two Voices are there, one is of the Sea,
One of the Mountains

A new venue for an away trip (well, it would be if we could go) - Holker Street, Barrow-in-Furness. It has been Barrow’s only home since being elected as one of the founder members of League Division III (North) in 1921. In that same year, we also re-joined the League, competing in the same Division as Barrow, and we finished 8th (Barrow were 15th). Fellow competitors in that Division included Stalybridge Celtic, Ashington, Southport, Durham City, and Nelson - the Champions that season were Stockport County … how times have changed!

Barrow regained their League place this season, having been shown the door in 1972 so that Hereford United could be admitted. Their League form so far has been patchy:-

It has been reported that Manager David Dunn and his Assistant Rob Kelly are both currently self-isolating thanks to Co-Vid - team affairs are in the hands of senior club players. However, Barrow’s potential to impress should not be overlooked - you must judge for yourselves whether their achievement in scoring 3 times in the first 20 minutes on Tuesday was down to spectacular scoring ability or the innate weakness in Bolton Wanderers’ defence. Similarly, what was the deciding factor behind conceding 3 goals to a Bolton side that actually doubled their “goals for” column. The end result, of course, was that Barrow still find themselves without a win in the League (just as we are still without a loss!). Just the kind of banana-skin match that we usually slip up on.…

Darrell Clarke will have seen a little of one of the recently signed loan youngsters in Jake Scrimshaw’s cameo against Bradford City. Might it be enough to merit his starting against Barrow? That would allow a degree of squad rotation as we plough through the current two-games-a-week schedule, and one or two players could possibly benefit from being rested (no names, no pack drill).

Prediction? We have demonstrated that every game will yield a couple of defensive howlers on our part, leading to the need to exploit the scoring abilities of our strikers or, indeed, to encourage the kind of long range screamer that George Nurse let fly this week. On that basis we should be able to look forward to a 1-2 away win, with Dan Scarr and Elijah Adebayo scoring.

How about Andrew Barrowman?

How about Andrew Barrowman?

I sometimes wonder why I bother …

Aren’t you goin’ up to Barrow man?

Rory Holden played a few games for them on loan before he came to us lot.

Rod McDonald played a game for them too. 149 for us.

Cant believe no one has mentioned Andy Cook in the connections

As none of us are allowed to go, one silver lining is that we won’t be terrorised by the local youth!
(item randomly came up on my phone) 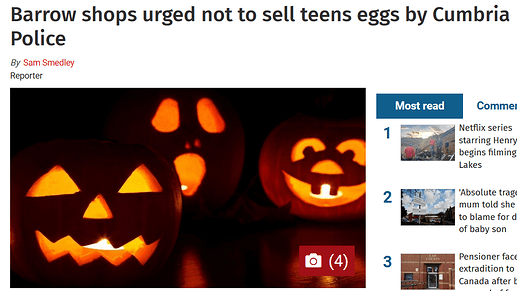 Agree … not on this thread we don’t want it to get scrambled.

In that same year, we also re-joined the League,

What were we doing in the season before this then Welsh?

We had been in the Birmingham League for most of the time since losing our league place in 1901.

What were we doing in the season before this then Welsh?

Believe it or not, we were in the Southern League. It went like this:-

And no, I wasn’t (quite) around at the time…

Would’ve been a cracking day out.

You can still go for the day