“Cause when you can’t see the light, you must see the Robins in flight"

Buoyed by a promising start to 2020 and renewed optimism amongst supporters, the Saddlers travel to Gloucestershire on Saturday to face a Cheltenham side enjoying an excellent season. 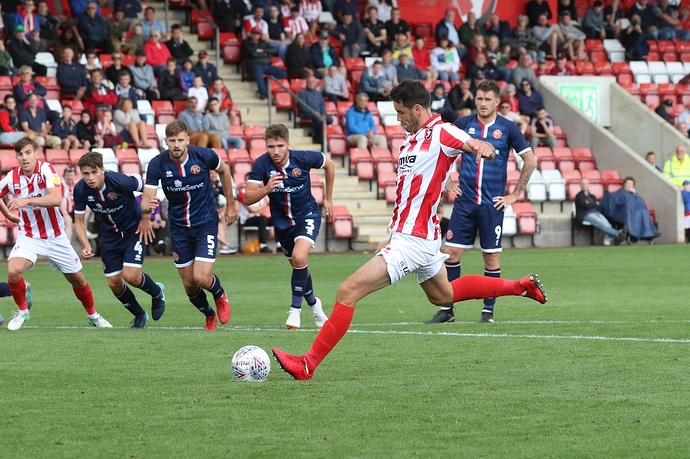 The Robins are 5th in League Two with a record of P25 W10 D11 L4 F38 A20 41Pts and currently sit six places and eight points ahead of the Saddlers.

Though Cheltenham have lost just once in their last ten league games they have drawn seven, but that run does include impressive 3-0 defeats of Mansfield and Oldham. Their home record is the 8th best in the division and the Robins have tasted defeat at the Jonny Rocks Stadium just twice this term.

Walsall’s last competitive game at Whaddon Road was a goalless draw in League One on 20th December 2008. Then managed by Jimmy Mullen, the Saddlers line-up featured a strike pairing of Michael Ricketts and Troy Deeney.

More recently, the Saddlers won 2-1 in a pre-season game at the same venue ahead of the 18/19 season. That game is perhaps best remembered for trialist Tomas Egert conceding two penalties. He was not offered a permanent contract.

Current links include Elijah Adebayo who scored two goals in seven games for Cheltenham during a loan spell from Fulham in 2018. Former Saddler Reuben Reid made 18 appearances and netted three times for Walsall whilst on loan from the Albion in 2010/11. He joined Cheltenham this summer but is yet to feature due to injury. Cameron Pring also spent part of last season with the Robins.

Midfielder Matt Richards played 86 games and scored 12 goals for Walsall in a (highly underrated, in my opinion) two year spell between 2009 and 2011. He enjoyed an almost identical record at the Sloppies before joining Cheltenham in 2013, where he made nearly 100 appearances.

Walsall youth product Gavin Caines never made a first team appearance for the Saddlers but played 143 games for Cheltenham between 2004 and 2009. He was brought to Whaddon Road by then Cheltenham manager and former Walsall Head of Youth Development John Ward.

Cheltenham are a very good side and strong at home, but on a decent run of form and with the 5th best away record in the division, Walsall have proved they can match any team on their own patch.

Walsall to reward our superb travelling support with a 2-1 victory.

Got a good feeling about this game although Cheltenham at the Bescot when they beat us seemed a very organised and workmanlike team they are limited quality wise.
We certainly have nothing to fear with our confidence high and a large and noisy following . So I say 2-1 to the saddlers.

Looking at their stats they’ve drawn a lot of games, lost the joint least amount of games in the league and not conceded many so a tough team to break down by the looks of things

What a losers line up that is.

With all the buzz about the place at the min, I’m going 2-1 to the saddlers, but I’d be happy with a good performance and a draw

A tough game this…they were one of the best teams I have seen this season. They signed May from Doncaster last week and have just signed the goalie who played so well for Macclesfield a few weeks ago.0-0 or 1-1 for me.

Win tomorrow and would go within 5 points of the Robins, they are currently 5th and three points myself off the 3rd automatic spot.

It remains a long shot but maybe shows it’s a bit premature to be just writing off the season. Two more winnable home games coming up this month aswell.

Momentum ,confidence,effort ,and a will to win can take you places in this poor league. Why shouldn’t we be talking and aiming for a play off charge.Walsall ay we .UTS

Expectation is on the rise, but this is a sterner test.

A single goal win for either side I reckon.

Hope we’ve options in midfield, as in Guthrie and Sinclair are back in contention. That would make a positive difference.

With our large and hopefully loud away support tomorrow i think we will win 2-0. UTS.

One goal more and will be good. I suppose they see it as must win game, so every unfortunate event (goal for example) can have some negative consequences. For them. It happens all the time, when you need to confirm, how good you really are.

Everytime alot of us predicts a win we always lose, so I’m predicting 2-1 loss so hopefully we win

Win tomorrow and would go within 5 points of the Robins, they are currently 5th and three points myself off the 3rd automatic spot.

It remains a long shot but maybe shows it’s a bit premature to be just writing off the season. Two more winnable home games coming up this month aswell.

While I agree about not writing off the season just yet, Walsall do seem to make a habit of not winning these ‘winnable home games’.

I’m a little more confident about the difficult away games.

A tough game , a draw will be a great result