So it appears that we will one again do battle in Sky Bet League Two next season as we are pretty much safe from the drop.

One of the last away games on our Covid-19 Tour is away at Colchester United this comiing Saturday. The KICK OFF TIME IS 17:30 to avoid clashing with the funeral of the recently departed Prince Philip.

Colchester United are currently 22nd in League Two, 4 points above Southend (who they have to play next week I believe), with 5 games left to play. Astonishingly, after an OK start to the season, their last twenty games have resulted in ONE WIN, nine draws, and ten losses. 12 points out of 60. Couple that with our recent poor form over 20 games and if this was the start of the season we would both be massively in the ■■■■.

The last six games for The U’s have given the following results:

Going into the game, if Brian Dutton decides to start with a back four, I personally think this game is there for the taking and could be the game where we finally give someone a roasting by four or five goals. Reality suggests this unlikely, but I think we may be on to the start of something better now.

Team selection is still a bit of a guess, although it appears slightly less randomly generated these days. Jack Rose I expect will keep his place in goal, and I think we could see the remergence of Cameron Norman into the starting XI. Rory Holden, possibly carrying a niggle from Tuesday night, hopefully will not be risked if he isn’t 100%, and may have to settle for a place on the bench.

@TheBostedSlab can give us a list of many players to have worn both shirts, I’ll start the list off with Jimmy Walker and Clive Platt.

Are you going to be watching the match? Let us know below where and who with, especially now we are allowed outside again!

PS. @chunkster @RedandWhite @Scooby2167, if you’re going to put any money on a 4-2 result then this is likely to be the only game it happens in for the rest of this season. Don’t let @WiltshireSaddler fool you.

History would suggest a draw as that is what we have been doing against the poorer teams. But, now we are safe, I hope that BD plays with a back 4 and we play with freedom.

Colchester will be fighting for their lives, of course. They need to win.

They will also have the benefit of knowing Southend’s and Grimsby’s score from earlier kick offs. I will be happy with a draw from this game.

I’m sorry to do this, but this hasn’t got 4-2 Saddlers written allover it, so don’t under any circumstance lump on. But feel free to throw 32 pence on it as a punt.

Going to say a 0-0 draw. We have always struggled against these Kinda teams even way back when. Be interesting to see what Dutton plays. Play to win or battle for a draw?

I’m sorry to do this, but this hasn’t got 4-2 Saddlers written allover it, so don’t under any circumstance lump on.

They lost their last game 5-2 to Oldham.

We should be having a go at these!

Colchester will be fighting for their lives, of course. They need to win.

Hard to believe that just 10 months ago they were 1-0 up after the 1st leg of the playoff semi-final and now they’re staring down the barrel of dropping out of the league.

Why on earth would we play for a draw? We’re 12 points off relegation.

These are poor, should be a win.

Agree we need to have a go and try and get some momentum to take into next season especially now we are virtually Safe.

I’m not sure how Colchester will approach the game.

Will they be happy with a point? Or will they go for a win?

Yep, I have no idea how this’ll play out. Strangely, I did think we’d get two results out of fgr and Birkenhead.

I agree it’ll largely depend on col u’s approach. Will they be cautious or gung ho winning every 50 50 using noubles pace?

I think the latter allows us to exploit and it’s a good chance for those really coming into form in our squad to do well. They’re really poor defensively as well.

I haven’t got time to look at the moment, but look at their last fixtures and it will give you some idea of how they should look to play against us.

Not sure why it matters? They are still a poor team and we have nothing to lose.

I’m just thinking about players like Holden, who whilst obviously would be in our first 11 normally still looks a bit fragile with regards to coming back from his injury.

Why risk him in what is a pretty meaningless game for us?

Good chance some of Colchesters tackling will be tasty.

Not sure what I’d do if I were Dutton.

Look at that for a run in… think they’d rather draw to us than risk losing with Southend up next for them. Let’s go out there in their faces and for the win, let the players prove they should never have been in the relegation discussion. 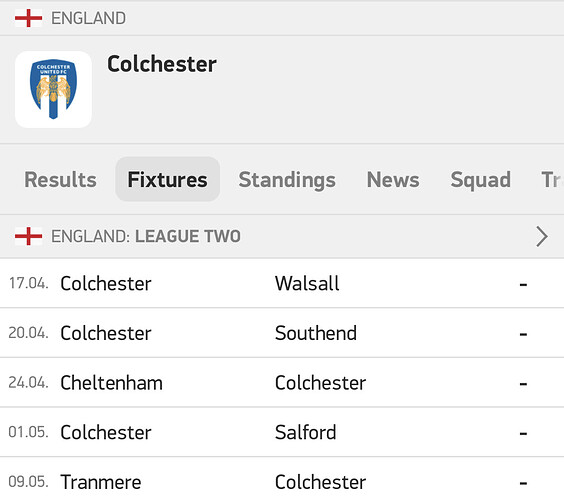 Agree we should be all out to beat these and anyone else for that matter now we are safe .
Could understand if BD tried not to lose to keep an impressive little run going but I would prefer us to risk losing and show everyone what we are capable of by playing an attacking game .

In fairness Dan, I would think they see us and Southend as two winnable games in their quest for survival.