Back to League Two action this weekend as we head up to The Wirral to take on Tranmere Rovers in a game that could see us push into the playoff positions if results go our way.

Our hosts go into the fixture sitting 15th in League Two after struggling for consistency this season so far - 9 wins, 7 draws and 9 defeats in their league fixtures so far - although they do find themselves only 4 points outside the playoff positions such is the openness of the top half of League Two this season.

Still managed by Micky Mellon, who is in his second year of his second spell in charge of the club, Rovers will be hoping for a strong second half of the season with a place in the playoffs being something most fans would be hoping to achieve, and with it being the January transfer window, reinforcements will surely be added to the squad.

On the note of reinforcements, it has been widely reported today that Forest Green Rovers captain and striker Jamille Matt is on the verge of a move to one of Walsall or Tranmere Rovers, what a coincidence!

Taking a look at Rovers’ squad list, there doesn’t appear to be much squad depth at the moment, but two players who have featured more often that not this season are striker Kane Hemmings, who has 7 goals and 3 assists in his 25 league appearances this season, and ex-Saddler Kieron Morris, who has made 17 league appearances and has 1 goal and 4 assists to show for his efforts. One other ex-Saddler in the ranks of the hosts is goalkeeper / goalkeeper coach, Joe Murphy, who although hasn’t played so far this season in any competition is still registered as a player at the ripe old age of 41.

It was touched upon earlier in the preview, but inconsistency has been a key component of Tranmere’s season so far, and their last six fixtures reflect this, with the results of those being:

Onto The Saddlers now, and we are on a tremendous run of form that has seen us lose just one game in all competitions since October, with a place in the FA Cup Fourth Round secured and a very positive atmosphere around the club both internally and within the supporter base for the first time in a while, and boy is it good!

Michael Flynn was over the moon with our win over Stockport County in the FA Cup Third Round last time out, and he is seeking to add more quality to the team in the transfer window in order to get us into those playoff places, with talks planned with the board over the coming few days.

A bit of sad news came from the club this week with the news that midfielder Jack Earing is going to be out for some time with what is being described as a ‘serious knee injury’, and we wish him all the best in his recovery from that.

Other injury news appears to be that Joe Riley has had successful surgery on his mystery injury with no timescale reported for him being added back to the squad, whilst Joss Labadie continues his recovery from an ACL injury. Conor Wilkinson is now back in the fold on a regular basis and it is all about minutes in the legs for him now.

This game could be the last game we see Danny Johnson in our kit, personally I think we will get it sorted, but if it should be his last appearance for us I hope he can bag a couple of goals for us here. Do you think we will do the deal with Mansfield or not? 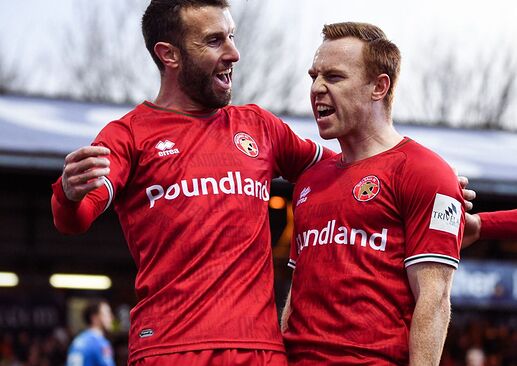 The starting line-up is another conundrum - do you keep the same starting XI, or do you introduce some fresher legs? Robbie WIllmott came off the bench and undoubtedly was a big reason we got the result on Sunday, providing he is match-fit would he be worth a start? Brandon Comley had a good performance after coming back into the team, do you keep him in from the start?

Safe travels to all Saddlers heading up to the game, let’s back the boys and bring another 3 points back to Walsall and keep the good times rolling!

That’s if we sign Matt before Saturday, otherwise Williams for James Taylor the only change for me.

Lead singer with The The.

Who The F are The The?

Another win is my forecast. 2-0 and revenge for their last minute win at our place early in the season.

Cut from the same cloth as Talk Talk and Duran Duran.

Back on thread I’d take a draw and move on.Is it just me or does it seem like we have one hardly played at home and two not played a side near the bottom of the table since the end of august?(sarcasm obviously).

I think we are on a roll now, confidence is the highest i have seen all season, we seem to have found the winning formula win win

This is the Day

Tranmere in September, Wimbledon and Rochdale in October and Crawley in November.

That’s just insane to me mate.It did feel like we’ve hardly ever been at home at the weekend.What about sides down the bottom? That feels like a similar type of thing unless I’m talking out my backside.

Saturday will be Tranmere’s eighth Saturday home game in the same amount of time.

unless I’m talking out my backside

And that would surprise anyone because?

We haven’t played a team in the bottom half since Crawley on 19th November, with Doncaster, Swindon, Stockport and Mansfield since. That was also our last Saturday league match home or away.

2-0 Walsall imo we are flying at the moment long May it continue and hopefully Flynn gets some signings in to bolster the squad !!!